“There are products, but no money,” says a university professor from Aden. “The supermarkets are open, but things are very, very expensive,” says a teacher from Sana’a. To be able to feed her three young children she has stopped paying the rent and “cooks very little.”

Yemen’s humanitarian situation is bad in March 2016, after nearly a year of war by the Saudi coalition against Shiite Houthi rebels and forces of former president Ali Abdullah Saleh. Some organizations claim that the country is on the brink of famine, with 80 per cent of the population in need of humanitarian aid. Whether the numbers are accurate is hard to say, but the country is undeniably in a dark place.

There may be food, but people can’t afford it because prices have gone up many fold, while people have lost their jobs or do not have their salaries paid—money that already was barely enough to get by on before the war.

Some say it is the fault of the sea, land, and air blockades by the Saudi-led coalition. The blockades are meant to prevent weapons from reaching the Houthis, but they have also prevented food and other humanitarian aid from coming into the country. But that does not explain why some food is still available, so there is more to it than that.

Once shipments are cleared, often after long delays, they need to reach the cities and villages. “The continued targeting of humanitarian facilities and the diversion of relief items by armed groups has further blocked humanitarian operations,” says one of the aid organizations.
The same goes for domestically produced foods such as fish, fruit, and vegetables. Transportation companies, too, have increased their prices substantially, not only because of increased fuel prices but because they also want extra money for the security risks they run and, perhaps not least, simply because they see a business opportunity.

The Houthis too, have seen a business opportunity. They are widely accused of raising a “war-effort tax” on services and goods. “It is an illegal levy, mostly an extortion. The amount they charge is up to the field commanders. It is a corruption scam to line the pockets of Houthi commanders,” a political analyst in Sana’a says.

So, if goods reach the (black) market at all, their prices have at least doubled, often much more. Middle-class Yemenis like the professor from Aden or the teacher from Sana’a may still get by, but others don’t. “Day labourers and their families have joined the ranks of the starving,” the political analyst says.

Then there are situations in which the goods do not reach the people at all, as in Taiz, Yemen’s third largest city. Taiz was, until the beginning of March 2016, effectively under Houthi siege. They controlled the entrance roads to the city and tried to “smoke out” the resistance, a mishmash of fighters who resist a Houthi takeover.

Another problem is the lack of medical care due to a lack, war-related or not, of medicines and, above all, fuel. No one who ends up in a Yemeni hospital these days can be sure there will be any treatment available. It all depends on whether there is electricity or not.

The fuel problem is caused by shortages, sabotage, and corruption. The already meagre domestic oil production has been halted by the destruction of pipelines and other infrastructure; the refinery in Aden has been bombed by the Houthis, and the (free) shipments delivered by the Saudis seem mostly to reach the black market.

But perhaps Yemen’s biggest humanitarian problem is not the war, or at least not only the war: it is the fact that, before the war, much of the population was already surviving on humanitarian aid, especially in poor remote areas, far from the cities, where no crops grows—or where something used to grow a few decades ago but no longer does, because cash crops have been replaced by qat, the mildly narcotic plant to which much of the population is addicted. Qat consumes most of Yemen’s salaries, water resources, and fertile land.

In wartime, qat may be helpful for soldiers—many of whom are pictured these days with their cheeks full of it—and citizens alike. “Let people chew; don’t make it harder on them,” one citizen says. One might ask, though, whether in times of war the country wouldn’t be better off with more nutritious food from its land.

In recent decades, however, economic development, birth control, education, and the eradication of qat have not been priorities of the country’s leaders. They have been busy keeping peace or making war, or both. Despite often being referred to as Arabia Felix, Yemen has long been unhappy.

Over the last fifty years, it has seen two civil wars (1962-70 and 1994), countless bloody skirmishes between groups that are today’s enemies and tomorrow’s allies, and a failed Arab Spring. Humanitarian alarm bells have been ringing for just as long. The current war has only made them ring louder. 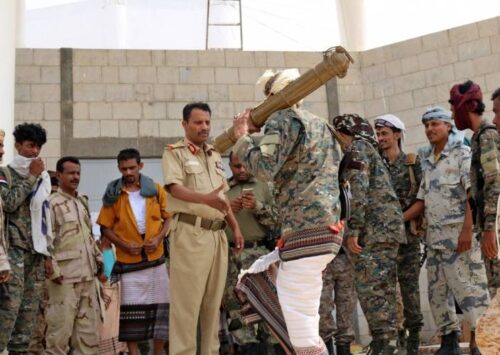 Did Yemen Just Sink Deeper into a Quagmire?
The Houthis, who have received support from Iran, maintain a grip on key central and northern provinces and have stepped...