Geopolitics and Stubborn Leaders Determining Direction of War in Yemen

The war in Yemen has gone from bad to worse, with August 2018 recorded as the deadliest month of the year so far. At least 450 people were killed in the first nine days alone. The deadliest incident came when the Saudi-led coalition bombed a school bus full of children, killing 50 and injuring 77.

The bomb was made and supplied by the United States (US), which is doublingg down on its support for a coalition that since March 2015 has been fighting to restore the internationally recognized government in Yemen by defeating the Iran-backed Houthi rebels. On 9 September, US Secretary of State Mike Pompeo certified arms exports to the coalition, after claiming that it was doing enough to minimize civilian casualties.

Rights groups disagree. Michael Page, deputy director of Human Rights Watch (HRW) North Africa and Middle East Division, said that Pompeo’s certification failed to account for the reality in Yemen. He noted that there is no demonstrable evidence that the coalition has improved its accuracy since it was first assembled three years ago.

The certification, added Page, gives the coalition the green light to escalate its assault on the city of Hodeida, which many observers believe to be a looming catastrophe. With 70 per cent of the country’s goods entering through Hodeida’s seaport, prolonged fighting could keep millions of Yemenis from accessing food and aid. The Saudis and Emiratis do not seem to care, arguing that the port is being used to smuggle weapons to the Houthis.

“There is a serious concern that civilians and civilian infrastructure, which is a necessity to keep people alive, could get severely damaged in Hodeida due to the inaccuracy of the [coalition’s] targeting,” Page told Fanack Chronicle over the phone.

Civilians in Hodeida are already bracing for the worst. On 16 August 2018, VICE News reported that 120,000 people had fled the city. The UN Special Envoy, Martin Griffths, tried to stall the coalition’s advance by scheduling peace talks in Geneva for 6 September.

However, the Houthis failed to attend. The militia later  said that it wanted guarantees that its plane would not have to touch down in Djibouti for inspection by coalition forces. The Houthis also demanded the evacuation of some of its wounded fighters to Oman or Europe as a precondition for talks.

“The [Houthis] would have liked to get here, but we didn’t make conditions sufficiently to get them here,” Griffiths told reporters at a news conference, declining to elaborate.

After the talks collapsed, the coalition moved to seize part of a main road that is connected to the sea-port, weakening the Houthis control over the supply of aid into the country. To avoid a siege, many civilians have contemplated leaving but say that it is too dangerous to do so.

“There are some bystreets, but they are not safe to go through because air strikes target any car in those streets,” Mohammad Hadi, a resident of Hodeida, told Middle East Eye. “It is better to stay in my house waiting for death than to leave amid battles.”

Laura Silvia, an Italian journalist who lived in Yemen until the coalition intervened in 2015, told Fanack Chronicle that the Houthis are trying to brand themselves as the face of civilians. She said that the Houthis’ rhetoric is resonating with civilians trapped in Hodeida, as most perceive the Saudis and Emiratis to be invaders. Then again, the Houthis are a brutal militia that has crushed all dissent in the cities it governs.

A recent UN report found that all sides in the conflict may have committed war crimes, including the Houthis. The group has been accused of indiscriminate fire in urban areas and of recruiting child soldiers who are as young as eight years old.

“The Houthis are very bad to people that are not with them,” said Silvia. “They even force families to give up their children to fight in the frontlines. Civilians are trapped by violent militias and bombardment by the Saudis.”

Developments in the south are also a concern. On 6 August 2018, the Associated Press (AP) published an investigation that found that coalition forces were cutting secret deals with al-Qaeda fighters. Many were paid to leave cities and town while others were bribed into joining the coalition.

These compromises have emboldened al-Qaeda and placed it on the same side as the US in the war. The US is allied with the Saudis against the Houthis, who are of the Zaidi Shiite sect that al-Qaeda disdains.

“Elements of the US military are clearly aware that much of what the US is doing in Yemen is aiding al-Qaeda in the Arabian Peninsula [AQAP], and there is much angst about that,” Michael Horton, a fellow at the Jamestown Foundation, a US analysis group that tracks terrorism, told AP.

“However, supporting the UAE and the Kingdom of Saudi Arabia against what the US views as Iranian expansionism takes priority over battling AQAP and even stabilizing Yemen,” Horton added.

The Houthis and the Saudi-led coalition are locked in a zero-sum game. Silvia says that the Houthis would only be willing to concede the south of the country if they can keep control of the north. However, the Saudis would never accept a peace deal that sees the Houthis governing on its doorstep.

It is not hard to understand why. On 14 September, the Houthis fired a ballistic missile at a Saudi Aramco oil refinery, although the kingdom’s air defences managed to intercept it. The attack risks further antagonizing Saudi Crown Prince Mohammad bin Salman, who appears disinterested in brokering a diplomatic end to the war.

Amid the violence, civilians in Yemen continue to pay the highest price. Right now, all eyes are on Ho-deida, where the UN has warned that a protracted conflict could  starve 8.4 million people to death. Silvia, for one, is not optimistic that cooler heads will prevail.

“All Yemenis know that neither side in the war is willing to take a step back,” she said. “In my opinion, the country will arrive at a final Armageddon in Hodeida or in Sanaa [the capital].” 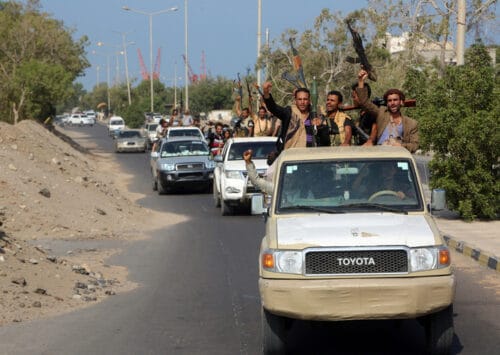 Stockholm Agreement: A Step Toward Restoring Peace and Stability in Yemen
While Yemenis hope the disputing parties will abide by the agreement negotiated in Sweden, the outstanding issues and su...