After the Yemeni government in exile announced that the city of Aden had been “liberated” from the Houthi rebels on 17 July 2015, it took months for the government to return to Aden. In October, a rocket attack targeted the government headquarters in Aden, and most ministers left again for exile in Riyadh. In November, they returned again to their alternative capital, Aden, but, by December 2015, they were still unable to return normal life to the city or to restore order and security.

Returning the government to Aden was not easy because of the massive destruction caused by the fighting between Houthi rebels and forces loyal to the former president Ali Abdallah Salih, on the one hand, and the southern resistance forces allied with the Saudi-led coalition forces, on the other hand, which had turned vast parts of the city into ruins. There was no building left that could be used as a government headquarters except for al-Qasr Hotel, which was hit by rockets launched from the centre of Aden.

The attempts by Houthi rebels and former president Saleh’s forces to control the city caused the outbreak of armed resistance in the capital of southern Yemen for the first time in 1990, after the unification of Yemen. Since the Houthis left the city, it has been suffering from chaotic fighting among various armed groups. The city was also plagued by assassinations and almost daily bombings.

Since 2007, southern Yemen has experienced protests demanding the secession of the South from the North, where Saleh and Houthis came from. This was later called the Southern Movement. In the war against the Houthis, resistance factions in the South were mostly from the Southern Movement and Salafi groups. In the midst of armed chaos, extremist Islamist armed groups such as al-Qaeda in the Arabian Peninsula (AQAP) and Islamic State (IS)—the latter hadn’t previously existed in Yemen—obtained sophisticated weapons from the Saudi-led coalition in an attempt to end the battle against the Houthi-Saleh alliance. These weapons went to all southern resistance fighters, which include some members of AQAP and IS.

Although UAE troops in the city attempt to restore some order, the city lacks regular security forces. Also, the government broke earlier promises to integrate resistance militants into regular security services and the military. On 6 December, the governor of Aden was assassinated, for which IS claimed responsibility. The leaders of several resistance groups are also at odds. As the government in exile took too long to return to the city, armed forces—the resistance factions, AQAP, and IS—competed to fill the political and security vacuum and impose a fait accompli in Yemen. By December 2015, no faction had succeeded in controlling parts of the city, and most of their attempts managed only to raise the flags of southern Yemen, AQAP, or IS.

The return of the government was not welcomed by the public. Most resistance factions demand secession from the North and consider the government a symbol of the unification of Yemen, which they reject. Also, AQAP and IS are trying to undermine the government and even replace it. Inefficiency, too, results from the divisions in the government, which justify public accusations against the government of irresponsibility and the pursuit of narrow interests. Media reports on disagreements between President Abd-Rabbuh Mansur Hadi and Vice President and Prime Minister Khalid Bahhah have become subject of ridicule among the people, who are suffering the consequences of a weak state, in both North and South. President Hadi represents the hardline Saudi camp that opts for a military solution in Yemen, which is endorsed by Deputy Crown Prince and Defence Minister Mohammed Bin Salman. Khalid Bahhah, on the other hand, represents the more moderate camp represented by the UAE and Saudi Crown Prince Mohammad Bin Nayef, which sees the need for a political settlement after ending the battle in the South.

Existing divisions took earlier several forms, most notably in the controversy over Riyad Yasin, the foreign minister designated by President Hadi after Houthi rebels had arrested Foreign Minister Abdallah al-Sayidi. After al-Sayidi’s release, Hadi kept Riyadh Yassin as foreign minister, and Bahhah kept Sayidi. President Hadi and Prime Minister Bahhah would meet foreign delegations separately, and each would take his foreign minister with him when travelling abroad. All attempts to bring the two parties closer, by proposing the dismissal of the two foreign ministers and appointment of a third have failed, simply because the dispute is deeper than that—it is an element in a power struggle.

President Hadi appointed Bahhah because of Saudi pressure during his stay in Riyadh, although he had, until then, avoided appointing any deputy. Hadi was clearly dismayed that Bahhah had been sworn in as his deputy, especially because of talk about Bahhah as an alternative to Hadi, who lost his popularity completely after people started to hold him responsible for all the unrest in the country. This issue was made clear in the seven-point plan mediated by UN Envoy Ismail Ould Cheikh Ahmed during his negotiations with the Houthis. The plan mentioned the return of Bahhah’s government but ignored President Hadi’s return to Yemen, even though his return as head of state was part of the UN resolutions on Yemen, which angered Hadi. The military operations in Yemen, which the Saudi-led coalition began in March 2015, have intensified the friction between the two rivals, who come from opposite backgrounds. Hadi is originally a military person who belongs to the old political generation that lived through the Cold War and the unification of Yemen, while Khalid Bahhah is a relatively young technocrat who holds a degree in petroleum engineering and lacks political experience, although he is better positioned to deal with traditional and social media.

Their different geographical backgrounds also play a role: President Hadi is from Abyan, and Bahhah is from Hadramawt, in the South, and their respective teams come from their respective areas. Hadramawt is politically significant for Saudi Arabia, because it is home to most Saudi businessmen, and this could revive old disputes and reinforce regional political alignments. Many regional civil wars took place in the South before unification in 1990, and Hadramawt was always demanding to separate from the South. What is worse, the popular standing of both leaders is weak. Hadi’s popularity dropped precipitously after the fall of Sanaʿa to the Houthis in September 2014. Bahhah, who seemed promising to some people, soon began to lose popularity because of his poor performance and because he failed to take responsibility for areas that were liberated from the Houthi rebels.

This split in the government and its weak performance have created the legitimacy crisis Yemen is experiencing, making it difficult for the government to play its required political role after the war ends. It is thus probable that even a halt to coalition strikes in Yemen will not bring an end to civil conflict anytime soon. 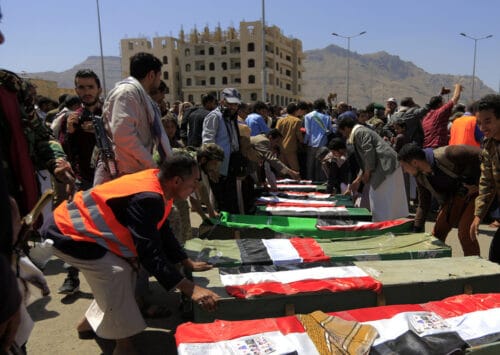 In Yemen War, Complex Ground Reality Hinders Peace Process
The complexity of the war is the main obstacle to the peace process. What started as the failure of a political transiti...