“Overall, it is positive,” said the Yemeni political analyst Abdulghani al-Iryani, when asked in February 2016 how he sees the current situation in his country: “The two sides are moving slowly towards a ceasefire agreement.”

A rare expression of optimism from a country where the reality is one of continuous air strikes, anti-aircraft missiles, assassinations of high-ranking figures from both sides, daily civilian casualties, and an ever worsening humanitarian disaster.

And despite al-Iryani’s optimism, peace talks have failed repeatedly, if they have been held at all.

One of the problems, according to analyst Farea al-Muslimi, is that none of the parties involved knows what it wants out of the UN-brokered talks.

So, “slowly” may be the keyword for now. Eventually there will be a ceasefire, because neither the Houthis nor the Saudi-led coalition is strong enough to win the war. But how much longer will they keep trying?

The next question will be whether a ceasefire would mean the end of the troubles. That’s easier to answer— no. It may bring humanitarian relief to the country, but not peace. In a way, the Saudi intervention is a distraction from existing domestic problems.

The pre-war list of troubles already was virtually endless: a separatist, albeit divided, movement in the South; Sunni extremist groups such as Al-Qaeda in the Arabian Peninsula (AQAP) and Islamic State (IS) in the south and east; angry Zaidi-Shiite Houthis in the north; tribal tensions; a non-existent government; extreme poverty; water shortages; guns everywhere; and an outside world that had no idea how to tackle these issues.

The war not only exacerbated all these problems, it has also created new ones. Historically of limited importance, the country is now facing a sectarian divide that will not be easy to bridge. And it’s not the only divide the country has to worry about.

“I am concerned about the aftermath. As in most armed conflicts and civil wars, the aftermath can be more destructive,” said a Sanaʿa-based businessman in a personal interview. “There will be acts of revenge and the settling of old scores.” This sounds realistic in a country where reconciliation has already failed frequently.

And with the absence of a super-leader, there will be ample opportunities for those who know how to employ distrust. People such as ex-president Ali Abdullah Saleh (former enemy but now ally of the Houthis), who mastered the skill of divide-and-rule like no other.

They will receive a little help from their neighbour, who may not know how to fight a military fight but does know how to manipulate the various factions of Yemeni society. To begin, the country will need money for reconstruction, and Saudi Arabia and its GCC allies will step in.

It’s unlikely the Gulf money will be refused. Even those who fiercely oppose the Saudi intervention have no problem with Saudi money. One of them wrote from Sanaʿa: “We are already telling the Saudis that they have to f***ing pay for what they f***ed up and maybe we might forgive them.”

It doesn’t sound unreasonable to let the coalition pay for what it destroyed, but, as the Yemenis know, influence comes with money. Saudi Arabia has a long history of meddling in the country’s affairs, and money has always played a crucial role in it.

“Keep Yemen weak,” the late Saudi King Abdulaziz bin Saud allegedly said to his sons on his deathbed in 1953. A Special Office for Yemen was set up, run by a committee of members of the royal family, cultivating a vast network of contacts in Yemen, all bribed with oil money. According to a report from the Norwegian Peacebuilding Resource Centre, the committee’s annual budget was, at its height, $3.5 billion.

Even if the reconstruction money were to be channeled through a special UN fund, it would not prevent the Saudis from supporting its allies on the ground with resources from outside the fund. It is with their deep understanding of the complex fabric of Yemeni society that the Saudis will once again subject Yemen to its will. 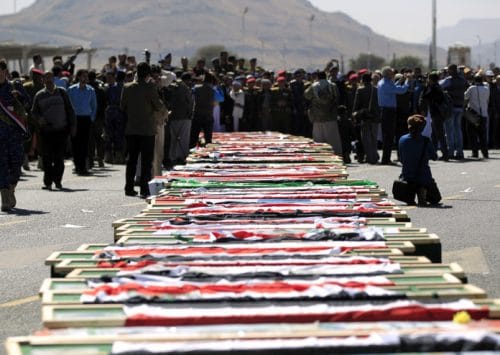 Yemen a Pawn in Regional Struggle for Influence
But due to (still relatively small) Iranian influence in Yemen, the Saudis and Emiratis will be obliged to work together...