The governments of the US and Great Britain – which started to work closely with the Saleh regime in the war against al-Qaeda in the Arabian Peninsula (AQAP) and other Salafist groups after 9-11 –, initially took a cautious stand. However, when it became clear that the protests were unremitting and starting to spread elsewhere, Washington and London gradually shifted their political allegiance. UN Special Adviser on Yemen, Jamal Benomar, and others supported mediation by the Gulf Cooperation Council (GCC) between Saleh, on the one hand, and the Joint Meeting Parties (JMP) and the al-Ahmar’s on the other. The mediation led to a transition agreement, arranging Saleh’s resignation, early presidential elections, and the reopening of negotiations with the opposition about reforms within the political system. In exchange, Saleh and about 500 high-ranking officials, mentioned by name (among whom persons now belonging to the opposition, such as general Ali Mohsen al-Ahmar) were to be granted immunity from prosecution. Saleh refused to sign the agreement on three occasions, mostly at the very last moment. His opponents were thus strengthened in their belief that the never to be underestimated tactician was simply seeking to buy time.

On 3 June 2011, with violent encounters increasing between troops loyal to Saleh, and defected army units and troops of the Hashid tribal federation, notably in the Hasaba district in central Sanaa, a powerful bomb exploded in the presidential mosque, next to the presidential palace, killing several high-ranking officials and severely wounding former President Saleh (he suffered shrapnel wounds, burns, and a damaged organ of balance). Saleh was flown to Riyadh, Saudi Arabia, for surgery. Then Vice-President (and former Major-General) Abd Rabbuh Mansur al-Hadi became Interim President for a period of 90 days. However, Saleh’s son Ahmed – the Commander of the elite Republican Guard – refused al-Hadi entry to the presidential palace, in order that Yemenis made no mistake about who really was in charge. Earlier cries of victory by the protesters after Saleh’s departure turned out to be premature.

The summer of 2011 was marked by continuous but isolated and relatively low-intensity fighting throughout the country – including between Saleh’s troops and those who had chosen the side of the opposition. Taizz was a hotspot, as were the tribal area of Arhab, north-east of Sanaa, and the province of Abyan, which were taken by Islamist militias. Everywhere food, water, and fuel became scarce except for in the far north. Popular demonstrations continued in he cities, while political factions negotiated Yemen’s future behind the scenes. The Saleh regime, however, stayed put, daily announcing Saleh’s return from Riyadh. The leaders of the popular revolt, calling themselves the Civic Coalition for the Revolutionary Youth (CCRY), distanced themselves from the JMP by demanding a much longer period of transition. They also called for those involved in former governments to be excluded from future positions. In addition they rejected the fact that Saleh and other officials had been offered immunity from prosecution (Human Rights Watch and others have pointed out that immunity from prosecution in the case of war crimes or crimes against humanity is a breach of international law).

The CCRY produced its own political reform program. The document (circa 1300 words) opens with the following statement: ‘This coalition aims at establishing a modern civil state that positively reacts with modernity on the basis of equal citizenship, human rights, social justice, political pluralism, freedom of expression and opinion and peaceful transition of power. (…) This coalition has a general objective of overthrowing the regime with all its corrupt components by means of peaceful civil efforts and building a modern democratic state.’ In short, the creed of the Arab Spring. 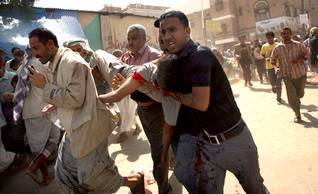