Yemen is culturally rich. Its impressive architecture, with its unique houses, has been integrated seamlessly into the spectacular landscape. Literature, including poetry, has been passed on orally to new generations, enriching the language with many aphorisms and proverbs. Popular culture has a rough, masculine edge to it, but Yemeni language and speech are eloquent, poetic, and powerful.

The 2011 Arab Spring was not orchestrated by Facebook and Twitter users in Yemen to the extent that it was in Egypt, Tunisia, and Syria. On the Midan al-Taghyir (Change Square) in Sanaa there was a prominent role for poets such as Mohammed al-Adrui, who combined traditional tribal zamil poetry (of pre-Islamic origin) with modern rap.

The most visually striking feature of Yemen is undoubtedly its architecture. Houses seem to hang from rocks at the most unlikely places, blending in with the steep and spectacular landscape. Western architects typify Yemeni architecture as lacking a plan – on paper, that is, though there is mental plan – but built by excellent craftsmen. Each house has been adapted to its surroundings, with regard to the materials used, as well as to form and dimensions. Each traditional Yemeni house is thus unique.

The architecture is diverse. Stone is used in the higher mountains. In Sanaa, the hundreds of five-storey houses (lower storeys of stone, upper storeys of fired bricks) compete keenly in height. At the top of each house is the mafraj, a penthouse-like guest room with panoramic views and full of mattresses and pillows. The other rooms have smaller windows, with coloured glass and crowned with a qamariya, an arch made of gypsum (or expensive alabaster). Gypsum whitewash, which has to be renewed every other year, decorates the outside walls. Massive wooden doors, carved elaborately and decorated with metal, give access to cool stairways. Between the housing blocks there is room for trees and bustans, large vegetable gardens.

Mud brick is used as a building material in the foothills and plains. In the Saada region, groups of irregularly quadrilateral houses blend in easily with the colour of the earth, resulting in a unity of tone much like that of the mud-brick architecture of Djenné, in Mali. It is possible to walk around Saada on the mud-brick wall surrounding it. The houses it protects are soberly decorated with bands of white plaster. A masterpiece of Yemeni architecture is Shibam, once the capital of the Hadramawt, and nicknamed the Manhattan of the Desert. Shibam boasts the world’s first skyscrapers, which are made of mud bricks, and are up to seven storeys tall.

Shibam has been designated a World Heritage site by UNESCO, with restorations constantly under way to protect the city from ruin. In fact, many Yemeni architectural masterpieces are constantly being restored, as mud and gypsum are washed away by the rain and wind. Restorers are reinventing traditional architecture and training new generations in age-old skills. Funding is usually provided by foreign donors, because maintenance often proves too costly for Yemen. Restoration of the famous Amiriya Madrasa, in Rada, was completed in 2006, but many historic buildings throughout Yemen, including a large number of domes and citadels, are on the verge of collapse, awaiting repairs and restoration. The same is true of archaeological sites.

Yemeni popular culture reflects the roughness of life, climate, and terrain, but Yemeni language and speech can be very eloquent. Conversations are laden with proverbs and sometimes turn into verbal jousts. This may reflect zamil, a form of traditional tribal poetry with pre-Islamic roots, in which short poems are made up on the spot or recited from memory. Tribal disputes and modern social conflict – many problems have been solved through the chanting of zamil. Few poems are written down. Yemenis do not read much, but they do have well-trained memories. Age-old stories, songs, and poems are passed on orally to new generations.

All Yemenis speak Arabic, the Sanaa dialect in the north, the Taizzi (or Adeni) dialect in the south. As many as half a million people in the eastern Hadramawt, and the Hadrami diaspora in East Asia, speak Hadrami Arabic. About 60,000 people on the island of Socotra speak Socotran (Soqotri), a Semitic language distinct from Arabic; it has been influenced by Indian and African languages, and by Portuguese. Most Yemenis speak no foreign language.

Yemeni music is little known outside the country. There are few famous Yemeni singers, as the musicians and songwriters have only limited resources for recording and marketing their music. Nevertheless, rumour has it that Yemeni songs are often ‘stolen’ by musicians from the Gulf, who reportedly record Yemeni songs under their own name.

Music is widely played, and songs are sung continuously during work and on long taxi drives. Small orchestras often perform at ceremonies and other feasts. Instruments used are the ud (lute), various small drums, and the flute. The singers usually remain seated. Dancers enter the floor halfway through the songs and walk rhythmically, usually in pairs, then split up and come back together. Often they brandish the jambiya dagger, mimicking a fight or some other incident. After the first round of the dance, the audience is gestured to join in. Several types of traditional dance are performed by women.

In 2005, the British-Yemeni director Bader Ben Hirsi won the award for the best Arabic film at the Cairo Film Festival, with the movie A New Day in Old Sanaa, which was also the first Yemeni film shown at the Cannes Film Festival. In 2000 Bader Ben Hirsi shot the documentary The English Sheikh and the Yemeni Gentleman, featuring author Tim Mackintosh-Smith.

Khadija al-Salami has produced numerous documentaries and films, often focusing on the subordinate role of women in Yemeni society. Al-Salami herself suffered abuse and rape when she was married off to an uncle as an eleven-year-old girl, but she managed to escape both the marriage and Yemeni society. At the age of sixteen she travelled to the United States to study communication. She now lives and works in France.

Yemeni men traditionally wear a thawb (also called zanna, futa), a large cloth wrapped around their waist, held together with a broad, coloured belt and a dagger, and a buttoned shirt and a jacket. You can tell a man’s tribe and where he is from by the way he wears his head cloth (mshedda).

Most Yemeni women wear the niqab (face-veil) in public, others wear a burqa (body covering and headscarf). Urban women dress in black, rural women wear a more colourful dress and often only a hijab or a headscarf. Lately more urban girls and younger women have stopped covering their faces, wearing just a hijab (locally known as sharshaf) instead.

Yemeni restaurants are lively places, with groups of men – women are seldom seen in restaurants – eating food from pots and plates placed between them. Yemenis do not use cutlery; eating with the right hand is the norm. Food is often served very hot on metal plates or in earthenware pots. Waiters generally shout their orders somewhere in the direction of the kitchen. Eating takes no longer than ten minutes, after which everyone goes his way, usually to a qat session.

In the morning Yemenis eat a small plate of cooked beans (ful). At midday they eat a solid meal, as an important preparation for the qat session. Chicken, beef, and fish are part of the diet of rich people, while poor people eat beans, more beans, kidneys, eggs, and bread. Vegetables are on most menus. In the evening Yemenis enjoy a small meal, the qat having suppressed their hunger. Food stalls are found everywhere in the cities, offering a wide variety of seasonal food. Food in the rural areas is often limited to home-grown vegetables and cereals.

Salta is the most popular and probably the most authentically Yemeni dish. It originated in the north but is also rapidly becoming part of the menu in the south. Salta is a stew, the ingredients of which vary regionally, including meat, onions, tomatoes, and potatoes; it is often made of leftovers. A bitter, frothy green sauce, helba, is poured over the stew. Helba is made from fenugreek seeds (hulba is fenugreek in Arabic), first beaten to powder and then steeped in water. The dish is served in a bowl hewn out of Saada stone. These bowls are heat-proof – all dishes are served literally boiling hot – and durable, by Yemeni standards. Salta is considered the best preparation for a qat session.

Yemeni bread comes in various forms, always freshly baked and mostly as small pita-like breads or very light, small loafs. Noteworthy is mallouj, which originated in Saada, in the north, and consists of an immense, folded bread deliciously flavoured with aniseed. Sweet dough is not as common in Yemen as elsewhere in the Arab world. An exception is bint al-sahn, a delicious cake made of thin layers of dough drenched in superior Yemeni honey and covered with clarified butter.

Yemen is not a very sport-minded nation. Soccer is played by Yemeni kids in the alleys and streets. There are hardly any athletic grounds or gymnasiums. In 2005, Yemen’s national football team was suspended by FIFA for alleged corruption in the National Football Union.

Yemen does compete in the Asian, Arab, and Olympic Games. In the 2006 Asian Games a Yemeni wushu (Chinese martial arts) athlete won a bronze medal. The Yemeni gymnast Nashwan al-Harazi won several medals in the Arab and Asian games, including the first gold medal ever won by a Yemeni, at the Arab Games, in November 2007. 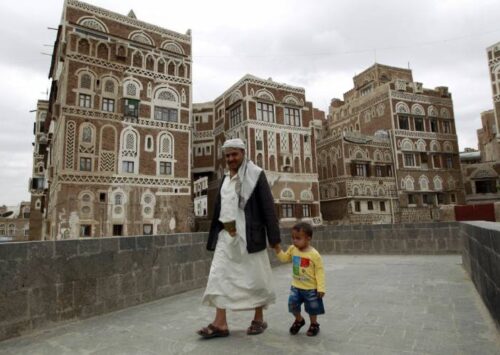 Yemen’s Architectural Gems Under Threat as War Rages On
Yemen’s Architectural Gems Under Threat as War Rages On
Throughout its long history, Yemen has hosted waves of Jewish, Christian and Islamic immigrants and interacted with Persians, Ethiopians and the civilizations of Eastern Mediterranean, all of whom left their mark on the country’...
"Ignorance leads to fear, fear leads to hatred, and hatred leads to violence.
This is the equation."
IBN RUSHD/AVERROES (1126 – 1198)
We are a Dutch not for profit organisation (NGO), financed solely by individuals who share our belief in the importance of publishing and disseminating reliable, unbiased information on the Middle East & North Africa region. To represent the voice of the region’s people, we carefully echo the region’s heartbeat by offering fact-checked and therefore credible information.
Your support is greatly appreciated and helpful!
Donate