Women-mules in Morocco: Between Morocco’s Indifference and Spain’s Organized Traficking 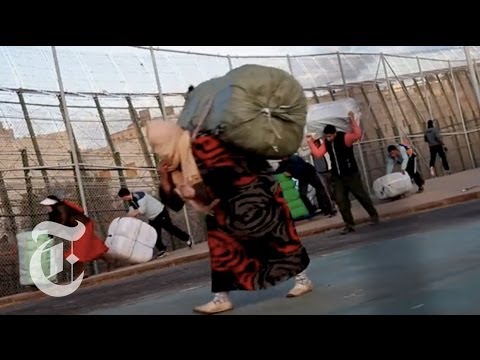 Thousands of female porters (porteadoras) of all ages risk their lives daily at the Tarajal border crossing between Morocco and Spain. Estimated at 15,000 per day, these women, also often called “mule women”, operate in the indifference of Moroccan authorities. They are led by the Spanish smugglers, who bribe customs officials to let the goods pass, and those in Fnideq, in Morocco, who then stash the goods in garages before redistributing them. If a load can be physically carried by a porteadora, it is considered her personal luggage, and can therefore enter Morocco duty-free.

Each year, Morocco’s economy loses 12.5 billion dirhams as a result of such contraband. Yet the daily ordeal of these women is met with the country’s indifference and organized trafficking by Spain, which gains €700 million in profit from it. `

The women’s plight is one that starts every day at the small hours, when women gather at the foot of a huge metal corral that connects Morocco and Spain. After checks at the frontier, they enter the Spanish enclave. Due to an agreement between Morocco and Spain, Moroccans who live in four towns close to the border do not need a visa to enter Ceuta, a Spanish autonomous territory which has a direct border with Morocco. However, as some 65 per cent of women porters do not come from areas along the frontier, meaning that they have to bribe the officials to register them as locals.

Once on the Spanish side, women are driven by runners to Barrio Chino (“Chinatown”), to pick up bales of goods prepared by workers. These bales are separated by distributors and numbered by marcadores so they can be counted upon receipt, before being finally hauled by mule women back to Morocco.

The wholesalers and warehouse owners stuff bags with money to pay everyone, so that in the end nothing stops the flow of cash from returning to them. A police source confirmed in 2018 to VICE that the industry generates some 500 million euros every year. Female porters pay five dirhams [about 53 cents] to each police agent who asks to see their documents,” explains Abdelmounaim Chaouki, president of the State Department of Civil Society in northern Morocco. “If they refuse to pay, they’re denied entry or sent to the back of the queue.”

Smuggling is an illicit activity in Morocco because goods are not taxed. Moroccan MPs have asked for a state intervention to stop the humiliation of Moroccan mule women and have called for an “economic alternative” to smuggling, which could help the women working in contrabandactivity find a decent source of income. The Fnideq-based journalist Ahmed Bouyouzane thinks the police and customs officers, as well as local functionaries, are profiting from women’s smuggling. As to Moroccan authorities, they regularly promise to improve the situation of women, but with no progress on the ground.

The Moroccan female porters made headlines nationally and internationally when two women were killed at a stampede in Ceuta on August 29, 2017. Nicknamed “mule women” on the Spanish side of the frontier, the female porters struggle under burdens heavier than their own body weight, risking their lives for the job. The image of women crumbling under heavy loads of goods and harnessed like working animals went viral around the world.

Regularly denounced by both Moroccan and Spanish Human Rights activists and journalists as “degrading” and “humiliating,” this “commerce” has already claimed the lives of four women, who were trampled to death in crushes, at this border crossing since it opened in 2017. And it has no end in sight. Hence, for the president of the Moroccan Association of Human Rights, Ahmed El Haij, Morocco and Spain need to stop the recurrence of such tragic events. “But just a few months ago a similar stampede took place, and preventive security measures failed to achieve the desired results,” he said. According to this human rights activist, a more effective solution to the problem of stampedes needs to be applied by, for example, widening the passage area pathway between the two countries.

According to Mohamed Benaissa, President of the Northern Observatory for Human Rights, many of the women do not come from afrontier region and have to pay bribes to be registered as locals. Those payments can range from between €300 to €500 ($350 and $585), a heavy sum for the women. The daily suffering of women is immense.

In parallel to Moroccan human rights activists, Spanish activists also denounce the situation of the mule women. For example, a human rights association in Cadiz, Andalusia, called for a sit on January 16, 2018, to put pressure on both Morocco and Spain to find an urgent and lasting solution “before a new tragedy occurs.”

Many factors delay action from Morocco and Spain. According to the New York Times, the city of Melilla sells the equivalent of $300 million a year in contraband trade, which keeps the city afloat and justifies the silence of the Spanish government on this exploitation of women from neighboring Morocco. Mohamed Chtatou, an established academician and a university professor in Rabat, calls the Ceuta smuggling “the trade of shame.” For him, the combination of misery, extreme poverty, and oppressive illiteracy are at the root of the problem. He also blames the region’s Rifian tribal culture which induces the exploitation of women through early marriage, as well as Moroccan society at large which is indifferent.

The fate of mule women in Morocco is exacerbated by the double impact of an increasing in-flow of sub-Saharan immigration and a rampant religious extremism. A 2016 report on national security cites the enclave of Ceuta as one of the main hotbeds of radical Islamism in Spain, along with Catalonia, Madrid and Melilia. Sebta is home to a radical Islamist community and cultivates links with Islamists from other European countries. Between 2013 and 2016, 20.3% of those sentenced for extremist-related activities were detained in Sebta.

Put together, the factors and consequences of the ordeal of mule women constitutes an urgent matter for both Morocco and Spain. The work of civil society in both countries is likely to drive change in the future.