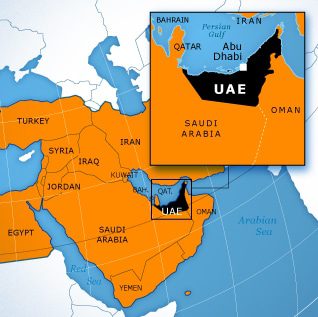 The UAE, formerly known as The Trucial States, is a young Arab country located in the eastern Arabian Peninsula, on the Persian Gulf, between Saudi Arabia and Oman. It was formed in 1971-1972 as a federation of seven emirates, after Great Britain ceded its control of the region, which went back to the 19th century. On 2 December 1971, six of these sheikhdoms (Abu Dhabi, Ajman, Fujaira, Sharja, Dubai, and Umm al-Quwain or Umm al-Qaiwain) merged to form the UAE. They were joined in 1972 by the seventh emirate, Ras al-Khaima.

Sheikh Zayed bin Sultan Al Nahyan, who ruled Abu Dhabi and was the first President of the UAE until his death in 2004, is considered by many Emiratis the founding father of the country. The UAE’s capital city is Abu Dhabi, the second largest city in the country, after Dubai. The official religion is Islam and the official language is Arabic. On account of the large number of foreign expatriates, however, the country’s lingua franca is English. Its oil revenues, strategic location, and moderate foreign policy, have given the UAE a vital role in the affairs of the Persian Gulf and Middle East regions. The country has witnessed in a very short time a complete transformation, developing modern institutions, urban centres, infrastructure, high-rise buildings, and communication and transportation systems. The expertise and labour needed to undertake this change attracted millions of migrant workers from across the globe.

The UAE is a member of the Gulf Cooperation Council (GCC) and the Arab League and has contributed financially to some Arab and other developing nations. It has also been involved in several international peacekeeping and humanitarian missions organized by the United Nations. The UAE has cultivated its global profile as a tolerant and prosperous country in order to develop the country into a global investment market, tourist destination, and cultural centre.

Against the background of monumental political shifts in the region, and surrounded by larger neighbouring countries, the seven small Arab sheikdoms on the Persian Gulf were left little choice but to join forces in the 1970s, when they entered into a union, the United Arab Emirates (UAE). There remain large economic differences between the emirates. Abu Dhabi has access to the largest oil reserves and the highest revenues. Dubai has the most diversified economy. This dynamic centre for trade and tourism – which resembles Manhattan with its tall skyscrapers – fell upon hard times as a result of the 2008 financial crisis and had to be bailed out by Abu Dhabi in 2009.