Former Israel Defense Forces chief of staff and political hopeful Benny Gantz is many things to many people. To his supporters, he is most often seen as a ‘non-politician’ or ‘anti-politician’: someone from outside the system, with no political background to taint his image of incorruptibility and beholden to no single group or party. Indeed, he has consistently rejected attempts to align him with a particular party, establishing his own party, Israel Resilience, in December 2018.

Shunning, he said, characterizations of right or left, he maintained virtually total silence for months on end, attracting not only public interest but also public support. With general elections set for April 2019, he has emerged as the only candidate with a real chance of unseating Prime Minister Benjamin Netanyahu.

Although a political outsider, Gantz is nonetheless a familiar figure in Israeli politics. The son of holocaust survivors from Eastern Europe, he was born and raised on a cooperative farm in southern Israel. He joined the army and rose through the ranks to the position of officer. His military ascent was steady but swift. It appeared to falter before the final prize, chief of staff, only to regain momentum when he was selected as a compromise choice in 2011 following political and military infighting.

Now that Gantz is a declared politician, his military career has come under scrutiny from his political opponents. He was, in fact, generally considered a deliberate and relatively cautious commander, opposed, for example, to Netanyahu’s suggestion to attack Iran, and a calm, reasonable “gentleman and officer” as Netanyahu once called him. The main criticism leveled against him by the numerous right-wing parties is that he is a “leftist”.

Most commentators predict he will draw votes from, if not devastate, the centre-left. This prediction can only be understood if one considers the Labour Party to be a left-wing party, rather than one of the numerous centrist parties that it has actually become in recent years. 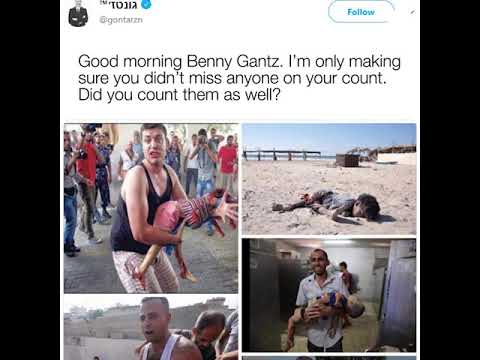 Only days before the televised launch of Israel Resilience on 29 January 2019, Gantz released a video that foreshadowed the positions he would soon present. Presumably intended to counter the charge of leftism, the video was a graphic summary of his ‘accomplishments’ as the chief of staff who led the 2014 devastation of Gaza and was instrumental in the assassination of a Hamas leader. His belief that this tough, crude CV was the key to the electorate’s heart was illustrated by his maiden speech. As one newspaper put it, he came across as ‘meaner but cleaner than [Netanyahu]’.

Without making direct reference to the two-state solution or the occupation of Palestinian territories, he spoke of a willingness to seek peace, but failing that, he would “shape a new reality” of Israel “as a strong, Jewish and democratic state”. This could be read as a possible territorial concession for demographic reasons. Similarly, his mention of the separation barrier may have been a hint at a future border.

At the same time, he openly declared loyalty to the ideas of a “united Jerusalem” as the eternal capital of Israel, the Jordan Valley as Israel’s eastern security border and Israeli control of security in the entire “land of Israel” (positions that have been obstacles to a peace agreement with Jordan in the past and with the Palestinians to this day), permanent control of the Golan Heights and the strengthening of settlement blocs.

Accompanying this were explicit threats to the leaders of Iran and the militant groups Hezbollah and Hamas of action, not just words, and a warning to the latter “not to test me again.” In case this message was not clear, he introduced his number two, ex-Defence Minister Moshe Ya’alon. Ya’alon has come out against the creation of a Palestinian state, believes that there is no chance for peace with the Palestinians and supports Jewish settlement throughout Israel.

Gantz spent much of his maiden speech blasting Netanyahu’s corruption, dishonesty and divisiveness. But almost all the other parties do this on a regular basis. So, what is Gantz’s appeal to the left and his supposed threat to the centre-left? He is the only candidate who stands a chance of defeating Netanyahu, the latter currently facing possible indictment in three bribery cases.

For many voters, that is reason enough to throw their support behind Gantz. Moreover, electing Gantz represents a first step toward reversing the country’s drift to the right, leaving the elaboration of policies and plans for the new, centrist government coalition.