Iraqi Nadia Murad was on 5 October jointly awarded the 2018 Nobel Peace Prize with Congolese gynecologist and surgeon Denis Mukwege for her efforts to end the use of sexual violence in armed conflicts. Aged just 25, Murad has in a matter of years become the voice of victims of sexual violence and human trafficking around the world.

Born in northern Iraq in 1993 to a family of Yazidis, a Kurdish religious minority, Murad’s life was turned upside down on August 3, 2014, when the extremist group Islamic State (IS) raided her village and kidnapped her and other young women after killing 600 people, including six of her brothers and stepbrothers. The women were sold into sexual slavery as part of IS’ campaign against religious minorities that did not conform to its interpretation of Islam.

Held captive in Mosul, Murad was beaten, burnt with cigarettes, raped and forcibly married to a jihadist. In a statement to the UN Security Council in December 2015, she recalled her traumatic experience: “In a building in Mosul, there were thousands of Yazidi women and children who were previously captured by [IS] to be offered as gifts. A militant approached me, he said they would take me, I was looking down, I was terrified, when I looked up, I saw a big man, he looked like a monster. I cried, I said I won’t want you […] Then he one day forced me to dress [in tight clothes] for him and put [on] make-up, I did, and in that black night, he did it.He forced me to serve his militant squad, he insulted me by forcing me to dress improperly. And I was unable to bear more rape and torture, I decided to escape, but I failed and I was captured by one of the guards. That night, he beat me up, forced me to undress and put me in a room with six militants. They continued to commit crimes to my body until I became unconscious.”

Murad eventually escaped with the help of a neighbouring family and fled to Europe. She was given refugee status in Germany, where she now lives. Her activism started almost immediately, and she has continued to campaign not only for her people but for all victims of violent conflict.

In an opinion piece for The Guardian newspaper, she wrote: ‘[The speech I gave at an UN forum in Switzerland in November 2015] was the first time I would tell my story in front of a large audience. 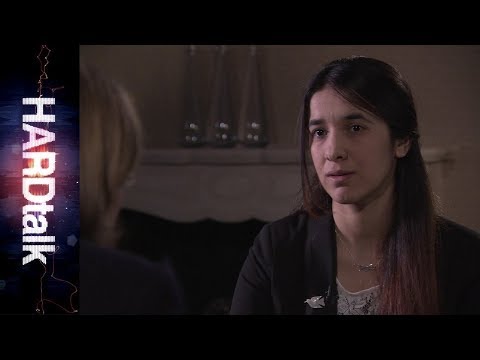 I wanted to talk about everything – the children who died of dehydration fleeing [IS], the families still stranded on the mountain, the thousands of women and children who remained in captivity, and what my brothers saw at the site of the massacre. I was only one of hundreds of thousands of Yazidi victims. My community was scattered, living as refugees inside and outside of Iraq, and Kocho [her hometown] was still occupied by [IS]. There was so much the world needed to hear about what was happening to Yazidis … Deciding to be honest was one of the hardest decisions I have ever made, and also the most important … More than anything else, I said, I want to be the last girl in the world with a story like mine.”

Murad and her friend Lamiya Aji Bashar, joint recipients of the European Union’s 2016 Sakharov Prize for Freedom of Thought, continue the fight for the 3,000 Yazidis who remain missing, presumed still in captivity. Murad also received the Vaclav Havel Human Rights Prize, the UN’s first  Goodwill Ambassador for the Dignity of Survivors of Human Trafficking, the Clinton Global Citizen Award and the Peace Prize from the United Nations Association of Spain.

The documentary On her Shoulders, which premiered at the 2018 Sundance Festival, focuses on her story and follows her journey, from testifying before the UN to visiting refugee camps and meeting with government officials.

She used her international profile to found Nadia’s Initiative, an organization that campaigns for and provides assistance to victims of sexual violence. She promised in her first press conference after accepting the Nobel Peace Prize to use all of her prize money to support the organization and use her voice to defend the rights of persecuted people around the world.

The prize gave hope to the Yazidi community back home. Nagham Hasan, a Yazidi activist and gynaecologist who offered treatment and counselling to many Yazidi women in refugee camps in Iraq including Murad, told the broadcaster Voice of America, “When Nadia escaped her captivity and arrived in the camp in Sinjar she was traumatized and afraid, but now she has blossomed into this strong woman and become the voice of all men and women victims of sexual violence.”

Her healing process was helped by writing her memoir The Last Girl, a moving and personal account of her harrowing ordeal and the path it set her on to activism and global recognition. She also got engaged in August 2018 to Abid Shamdeen, also a Yazidi activist, and tweeted at the time, ’The struggle for our people brought us together & we will continue this path together.’

Her bravery has won hearts and minds around the world. Journalist Kiran Nazish, who runs a global support network for women in journalism, wrote of Murad’s Nobel win, ‘This is a prize shared by every woman with the courage to speak out despite their fears and traumas. Women across the world who are standing up against oppression and censorship against their bodies, and their lives. These women are the lucky ones. As Nadia Murad told me that night in March 2016 [when Nazish met her] — “survival is a kind of serendipity, one that empowers you to fight for the survival of others”.’