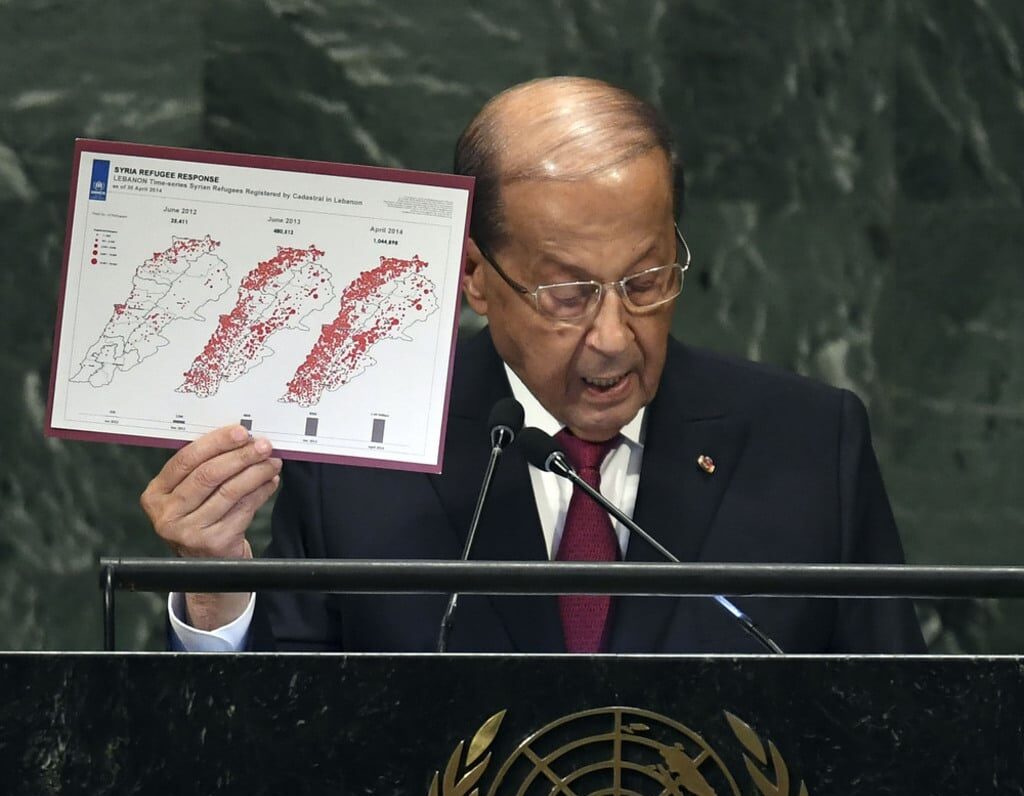 As of October 2018, there are 976,002 Syrian refugees registered with Office of the United Nations High Commissioner for Refugees (UNHCR) in Lebanon and a total estimate of 1.5 million in the country according to local NGOs. They began seeking refuge in Lebanon at the beginning of the war in 2011 and face many obstacles to leading normal lives.

The presence of Syrians in Lebanon is not new, but the circumstances have been very different from one time to another. The Syrian army occupied Lebanon from 1976 until 2005, when they were forced to withdraw under international pressure for their alleged role in the 2005 assassination of Prime Minister Rafik Hariri. The tragic event mobilized people into the streets, where they called for the Syrians to leave the country. The Syrians finally withdrew following the adoption of UN Security Council Resolution 1559, which called for the withdrawal of foreign forces from Lebanon.

Before the Syrian civil war, unskilled Syrian workers had been in Lebanon since the 1990s, working mostly in agriculture and other low-paying jobs in order to help sustain their families back home. At the beginning of the war, these workers brought their families to live with them in Lebanon, far from the fighting. Starting in 2012, thousands of refugees looking for shelter crossed the border as well, up until 2015 when Lebanon started preventing them from coming into the country and the UNHCR was forced to stop registering newcomers.

On 29 June 2018, an opinion editorial by the research department of Blominvest Bank published in the local English-language newspaper The Daily Star linked the presence of Syrian refugees to the rise of unemployment in Lebanon. The article stated, “between 2007 and 2010, the Lebanese economy was booming and the regions’ economies were also in prosperity…. since the 2011 Syrian refugee crisis, the unemployment rate in Lebanon has soared; this was largely fueled by an oversized influx of Syrian refugees who began to compete for jobs available to Lebanese nationals in the market.

Lebanon’s unemployment rate therefore almost doubled post-2011 to reach 20 per cent. According to the International Labour Organization’s latest estimates, unemployment in Lebanon stood at an average rate of 9 per cent in the period from 1990-2010. The Lebanese labor force totaled approximately 1.5 million individuals out of a population of 4.3 million. Thus, around 138,000 persons were unemployed in all of Lebanon.”

The article also pointed out that the average monthly wage for a Lebanese employee ($597) and a Syrian one ($278) are very different, leading employers to hire Syrians in service industries that constitute the majority of the employment sector, and recommended the State send Syrians back to their country in order to preserve the Lebanese economy. This thinking is widely spread in Lebanon despite the fact that more people in the country means more people to buy goods and rent apartments, thus participating positively in the economy.

Some municipalities have set up curfews for Syrians, not allowing them outside their home after nightfall, or the Lebanese Army has evicted them for “security reasons”. United Nations officials identified 3,664 such evictions from 2016 through the first quarter of 2018. “Municipalities have no legitimate justification for forcibly evicting Syrian refugees if it amounts to nationality-based or religious discrimination,” said Bill Frelick, refugee rights director at Human Rights Watch (HRW) in a report published on 20 April. He continued by stating that “any eviction of a Syrian refugee, as with anyone else, should be on an individual basis and for transparent, lawful and proportionate reasons following proper procedures.”

Lebanese politicians have been publicly calling for Syrians to leave the country, in particular Foreign Miniser Gebran Bassil, who doesn’t label Syrian “refugees” but instead as “migrants” and “displaced.” In an interview with The National, Bassil said that “they should feel at ease to go back… and (we) have to stop encouraging them to stay in Lebanon. The return of refugees has to happen gradually, we are talking about different categories of refugees, some are economic migrants.” On the margins of the United Nations General Assembly, he also said that “Lebanon does not accept Syrians to be refugees, not one of them.”

This political rhetoric has allowed vicious acts to take place against Syrians. To Reuters, Syrian refugee Abu Yazan, living near Tripoli, recounted an attack led by two men: “They both got off the motorcycle and beat me. The second guy took off his belt and hit me with it on my back, my head. I couldn’t do anything.” His wife cried for help but onlookers did nothing. Other refugees told Reuters they have hidden in their homes or camps for fear of assault, arrest, or humiliation.

Life for Syrian refugees in Lebanon has become increasingly harder, especially after 5 January 2015, when Lebanon tightened the documentation list mandatory to enter the country. Refugees now need legal residency permits in order to stay, which costs $200, a sum many refugees are unable to pay. In order to survive, many families make their children work instead of going to school to gain a supplementary income.

As a result, the proportion of Syrian child refugees working in Lebanon has risen to 7% from 4 % in late 2016, according to research by the Danish Refugee Council released to the Thomson Reuters Foundation. “Households in Syrian refugee camps in Lebanon, for example, are prone to resort to child labor to ensure the survival of their family,” the Food and Agriculture Organization said in a statement released on 12 June to mark World Day Against Child Labour.

“We have significant concerns about deteriorating conditions of life for refugees in Lebanon,” HRW Syria researcher Sara Khayyali told Fanack. “There is a rising and very negative public discourse calling for refugees to leave, and the conditions are bad enough for some to return prematurely to Syria. At a policy level, they have difficulties obtaining legal documentation which increase the risk of exploitation by employers and prevents them from accessing medical care. At least 13 municipalities have evicted people just for being Syrian, and they are mostly unable to get civil documentation like birth and death certificates. That plus a hostile rhetoric lead us to believe that things haven’t been this bad in a while.”

Although it is difficult to verify the numbers, General Security head Maj. Gen. Abbas Ibrahim claimed that 50,000 Syrian refugees had returned from Lebanon so far in 2018 and that the number could climb to 200,000 within a year’s time. In mid-October, 15 buses brought 776 Syrians back to their country.

Some Syrians have managed to build themselves a life through studies and work through an employer’s sponsorship. This is the case of Tarek Zakanda, a young man from Damascus who arrived more than two years ago in order to study. He now studies graphic design after studying English literature in Syria and teaches Arabic as a freelancer, “because I like languages,” he told Fanack. “I really like living in Lebanon, and especially Beirut, as it’s a hub for artists. Every day in this city is full of events and things to be done; I made friends from all over the world in this small city!”

He thinks that “some Syrians finds their life hard here because they’re illegal, or because of the lack of jobs and low income, especially if they have family here…it is hard here for many people I’ve met to integrate into the society because most of the time they will face either racism or a bad environment, but on the other hand you see many Syrians really happy with their lives here because they met good people and friends and found good jobs.” Zakanda hopes to leave Lebanon after his studies in order to “see the world.”

Others, like Ali Khedr, a 27 year-old musician, photojournalist and filmmaker from Salamieh, came to escape military service and avoid detention in Syria. He is also the co-founder of a voluntary initiative called Syrian Eyes which provides services to vulnerable communities in refugee camps. “For me, living here is a mix between struggle and joy,” Khedr told Fanack. “If you work hard, you can probably enjoy the good things about this country, but life here is quite difficult for Syrians, Palestinians and even for most Lebanese people because it is a daily struggle to survive.”

He regrets that “we lack here the residency status, the freedom of movement, and we have work limitations,” himself having stopped renewing his residency because “it’s so difficult to achieve and I have to pay for every month I delay.” As a result, he is afraid of being banned from the country at every checkpoint on his way, cannot maintain a bank account and always struggles to get paid for his freelance work.

“Speaking of rights, you know if you get assaulted or robbed or are the victim of any kind of crime, as a Syrian you are not allowed to be a victim and you cannot report anything to the police if you don’t have residency because they will stop you for your residency issue,” he said to Fanack. “Also, one of the tragic things that people face here is that if a Syrian dies in this country, his or her family will suffer in trying to pay for hospitals and find a spot to bury the dead, as municipalities don’t allow Syrians to be buried in public cemeteries or private ones.”

Ali Khedr spoke about “structural racism through the laws and hate speeches made by politicians and the Lebanese media.” He says, “adding more burdens on these communities through inhumane and unjust policies will only lead to more instability, hatred and fear of the other, and the many threats of sending refugees back are literally like sending them to death. But I believe that what’s going on here is a microcosm of what’s going on all around the world, even in Europe.”

Lebanon Syria Human Rights Refugees
You may also like