Saad Eddin Ibrahim: Over Half a Century of Political Activism in Egypt

Born in 1938, life-long activist and sociologist Dr Saad Eddin Ibrahim can look back on 60 years of Egyptian politics. While his voice has started to tremble and has lost some of its former strength, his memory is crystal clear. He can recall events such as his encounter with Egypt’s second president, Gamal Abdel Nasser, in the 1950s, his relationship with Hosni Mubarak in the 1980s and his first visit to Israel after the Oslo Accords in the 1990s as if they happened yesterday.

A few years back, Ibrahim and his wife Barbara moved from the centre of Cairo to a quiet, high-end suburb. Every morning, Ibrahim swims a few laps in the pool for exercise. He is “officially retired” but is an honourable chair of the board of the Cairo-based Ibn Khaldun Center for Development Studies, which he founded in 1988. He still attends the weekly open floor dialogues at the centre and travels regularly to participate in conferences and workshops.

One of his last visits abroad stirred controversy. Palestinian students branded him a ‘traitor’ when he gave a lecture on Egypt-Israel relations at Tel Aviv University in January 2018, accusing him of ‘normalizing’ the State of Israel. They started chanting at the beginning of his speech and continued their protest outside the auditorium.

Ibrahim explained that Tel Aviv University had planned an extensive programme to commemorate 100 years since the Egyptian 1919 revolution against the British occupation, and that he was invited by the Israeli professor Shamin Shimeer –“an old friend and colleague from US graduate school” – to give a keynote speech on this topic. 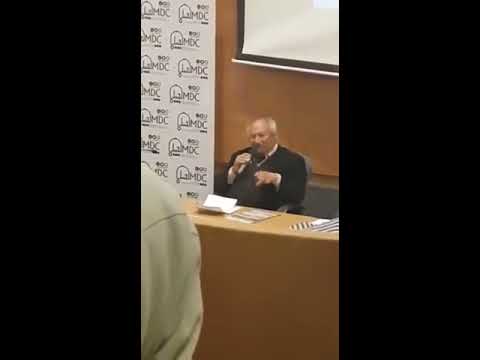 “There is a huge constituency in Israel interested in Egypt, not only scholars but also journalists and activists,” he said.

“Saad’s point is that after 40 years of refusing normalization with Israel, what has it gained for the Palestinians?” his wife Barbara, an American and herself a sociologist, added. “We want to end occupation, hate the settlements, are actually in favour of certain aspects of BDS [boycott, divest, sanction]. But I’m a real proponent of academic freedom, which means that outlier ideas deserve a place in the academy so they can be proven right or wrong. If you shout people down so they can’t speak, you’re preventing that.”

Ibrahim’s Tel Aviv lecture may have been extra controversial because he used to be a strong opponent of the Camp David Accords. “In the 1980s, Saad was still ardently anti-Israel and would not consider a trip even if it meant it cut him off from Palestinians,” Barbara said. “Whenever I invited him to join my work trips to the Palestinian territories, he would say that he couldn’t face an Israeli official, and wasn’t sure if he could control himself at a checkpoint.”

His stance on Israelis, academics in particular, eased after the Oslo Accords, especially when a group of Israeli researchers visited his Ibn Khaldun Center in Cairo. It led to academic exchange and reciprocal visits in the following years. Barbara: “We do have many [Israeli] friends, like-minded progressive like ourselves, who are displeased with their own government as we are. It humanizes the conflict when you start to see diversity in the other side; they are not just the enemy.”

Ibrahim became politically active when he was still at high school in a village near Mansoura in the Nile Delta. In 1955, he was selected as a promising student from his governorate to meet Gamal Abdel Nasser, then president. Ibrahim recalled that he confronted Nasser with the torture of a young Muslim Brotherhood boy in his village. “He [Nasser] was kind enough to let me speak, he started to take notes and asked me to continue.”

As a teenager, Ibrahim’s older brother recruited him to join the Brotherhood. “A very masonic type of organization, in which individuals are conditioned from a very early age to listen to and obey their elders and to be dedicated and to do anything for the movement,” he said. He left the group a few years later but continues to see a future for political Islam. “They should and could evolve like Christian democrats in Europe into Muslim democrats, and become a mainstream political party with a religious dimension.”

Ibrahim regrets that in its brief year in power (2012-13), the Brotherhood failed to do this. “They were in a hurry to take over and alienated a lot of people. They abused the opportunity […] but I still believe it is possible, that’s my own leaning as a democrat. The younger cadres could easily be re-socialized to accept diversity and competing peacefully without monopoly.”

He has done extensive research into political Islam over the years. In his collected essays Egypt, Islam and Democracy, published in 2002, he examined the prospects for democracy in Egypt and the role of Islamic activism in this. In Towards Muslim Democracies, published in 2007, he made a case for the compatibility of Islam and democracy.

He has also written on Muslim extremism. He described the typical jihadist as a young man from a working or lower middle-class background, who had tried to complete higher education but failed to climb the social ladder due to a bad economy, nepotism and a corrupt system. This left the man disillusioned and willing to consider (radical) Islam as the solution for society’s problems.

Other research has focused on minorities and minority rights. Ibrahim analyzed the Coptic community in Egypt as a minority in the ’90s, which was controversial at the time as it was still taboo in Egypt to define a group as a minority along religious lines.

Close to the Mubaraks

Ibrahim’s first clash with the regime came when he was studying in the United States (US) in the ’60s. As president of the North American Arab Student Association, he refused to follow the official political line of the Egyptian state. For that, his scholarship was retracted and his passport not renewed, effectively forcing him to stay in the US. He started teaching at Indiana University, where he met Barbara during an anti-Vietnam protest. In 1975, when Anwar al-Sadat had replaced Nasser as president, the couple moved with their two children to Egypt, and Ibrahim started working at the American University of Cairo.

In the ’80s, one of Ibrahim’s students was Suzanne Mubarak, and Ibrahim became an acquaintance of her husband, the recently elected Hosni Mubarak. “The first ten years I used to see him regularly, once every two or three months,” Ibrahim said. “Mubarak was a simple man and very unsure of himself. I would be the one talking all the time, he asked questions and listened.” On several occasions, Ibrahim even wrote speeches for Mubarak.

In later years their relationship deteriorated, to say the least, “The second ten years of his tenure, Mubarak became very self-assured … and then wouldn’t listen to anybody,” Ibrahim recalled. “The last ten years I stopped seeing him.”

Ibrahim disagreed in particular with Mubarak’s plans to install his son, Gamal Mubarak, as his successor. In 2000, Ibrahim wrote the sarcastic article ‘Gomlukia’, which roughly translates as ‘royalist republic’, about Arab leaders trying to shape the republics they ruled into a monarchy-like system with birth-line succession. The same day the article came out Ibrahim was arrested, and years of court cases and detentions followed. “Those were very interesting years for me. It was in prison I met some of the Islamic militants, whom I had studied for 20 years.”

In 2007, Ibrahim left Egypt again out of fear of renewed imprisonment, only to come back in February 2011 to join the celebrations following Mubarak’s ouster and the 25 January Revolution. In the years since, the celebratory mood has been forcefully crushed under President Abdel Fattah al-Sisi. Ibrahim described the current regime as “unwise” to clamp down on civil society and shun Islamists. For instance, a law that was ratified in May 2017 imposed severe restrictions on NGOs. The Ibn Khaldun Centre was forced to scale back its activities as it became increasingly difficult to raise funds and receive overseas grants.

“Not the career we had expected when we got married, but an interesting one,” Barbara said of their life together and the turbulent decades of political activism. Ibrahim nodded. “It all worked out, with ups and downs, but the net result is fine.”

Speaking with Ibrahim, one feels that his mission is over. He has done his part – “clashing with every regime from Nasser to Sadat, Mubarak and al-Sisi” – and now hopes that his fight for democracy, rights and civil society in Egypt will continue after him. “We have gone through a lot of regimes and have survived, outlived them, so I hope we will outlive the current regime.”