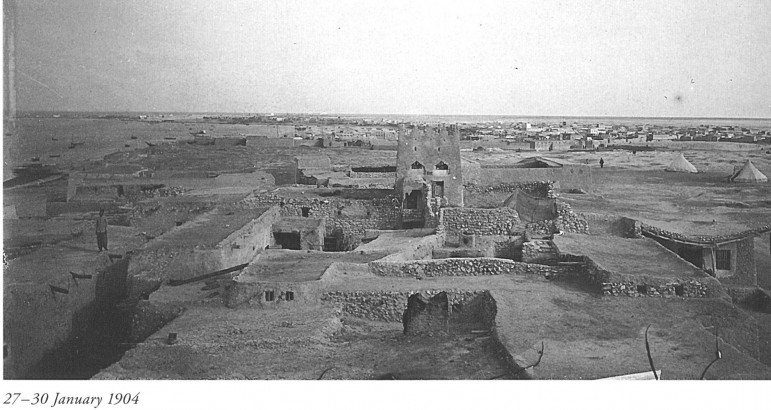 At the end of the 19th century, Jassim was the paramount Sheikh of Qatar, but his leadership was contested within his own family. His brother Ahmad, who was appointed kaymaqam after Jassim’s clash with the Turks, was his main challenger. Jassim wanted to establish close relations with the Saudi-Wahhabi forces in central Arabia, even publicly accepting their religious creeds. Ahmad however threw in his lot with the Ottomans.

Their feud only ended with Ahmad’s murder under mysterious circumstances in 1905. When Jassim died in 1913 – the year the Saudis drove the Ottomans from eastern Arabia – his fifth son Abdullah succeeded him. Abdullah’s leadership was contested within the family from the very beginning. With his ambitious kin turning to the Saudis for armed support, and with the Ottomans gone, Abdullah had no choice but to plead with Great Britain for military and diplomatic assistance.

In November 1916, Abdullah and the British signed a new treaty. The ‘chief of Qatar’ promised to abstain from maritime warfare and not to establish relations with other powers nor to cede any land, pearling or concession rights without British consent. In return the British would protect Qatar from attack by sea. Thus Qatar independently entered the British ‘trucial system’ in the Gulf.

The British allowed Abdullah to buy arms to keep family members at arm’s length. But he also had to secretly pay Ibn Saud an annuity of 100,000 Indian rupees – then the local currency of the British controlled sheikhdoms of the Gulf – in exchange for not meddling in family affairs. In desperate need of cash, Abdullah subsequently granted an oil exploration option to a subsidiary of the British Anglo-Persian Oil Company (APOC) in 1926.

In 1935, this option was extended after the British guaranteed to protect Qatar from ‘unprovoked aggression by land’. In the process, the oil company defined the borders of Qatar in a map attached to the concession. Britain also recognized Abdullah’s son Hamad as heir apparent, in an effort to streamline the Al Thani dynastic succession. But oil was not discovered in Qatar until 1939.

By then, Qatar’s economy and society were in deep crisis. The crash of the pearl market – as a result of the Japanese invention of artificially cultured pearls around 1930 – combined with a worldwide economic depression had crippled the local economy, which was almost entirely dependent on pearl fishing.

In 1937, the Al Khalifas of Bahrain almost delivered Qatar’s deathblow by declaring a trade and travel embargo on the tiny peninsula. It was the direct result of renewed hostilities over al-Zubara, which had been visited by oil company representatives. Qatari traders migrated to other places in the Gulf, taking their entire clans with them. Whole villages were deserted and fell to ruin. The total population of Qatar dropped from 27,000 in 1908 to a mere 16,000 or less in 1949.

Qatar Economy Politics International Affairs
You may also like