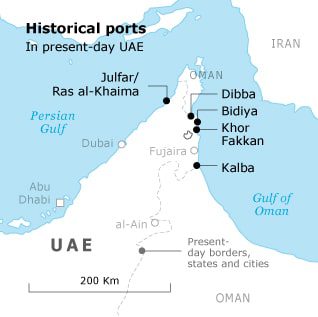 Historically, the eastern Arabian coast was at the intersection of two different ways of life, nomadic pastoralism, originating in the interior of the Arabian Peninsula, and long-distance sea trade (including trade in pearls) linking the area to civilizations in the Nile Valley, the Tigris-Euphrates basin, and the Indus Valley. While the coastal towns traded with the nomadic pastoralists of the interior, their primary orientation was towards the sea. The area has thus long been cosmopolitan, with people, ideas, and goods from distant lands constantly passing through. The settled population changed with the trading seasons, tied to the monsoons, which led to large seasonal shifts in the ports’ populations and to long periods during which sailors stayed (and often married) in distant ports until it was again safe to sail.

Today’s major ports are new, largely because the desert’s constantly shifting sands and silting of waterways would, over time, block ports. The populations themselves, however, were also very mobile, because, as Lawrence Potter put it, ‘in a region where boats and not land constituted capital, it was easy to sail away and reestablish themselves elsewhere and there was little a ruler could do to stop this’. From the 14th to the 16th century, Julfar, in Ras al-Khaima, was the most important port. By the mid-15th century, it had grown from a small fishing village into an important town, and it is thought to have been linked by trade to the growing mercantile center of Hormuz. Following Julfar’s decline, the town of Ras al-Khaima became the principal port in the area.

Merchant ships from Spain and especially Portugal began trading regularly to the Gulf in the 15th and 16th centuries. Their primacy gave way to the Dutch and English in the early 17th century. By the 18th century, Britain was the dominant power in the Gulf. In the mid-19th century the British, in order to protect their commercial interests, signed treaties – hence the name Trucial Coast – with local leaders to ban piracy which struck at maritime shipping. These treaties laid the basis for British rule.