Following a year of negotiations, Iran and the P5+1 nations (the five permanent members of the UN Security Council plus Germany) failed to reach a nuclear accord by the deadline of 24 November 2014. The parties did, however, agree to a seven-month extension in the hope that a comprehensive agreement might still be attained. Negotiators anticipate that a political agreement—which is expected to be a broad statement on the future of Iran’s nuclear programme—can be reached by 1 March 2015 and an implementation plan by 1 July 2015

In November 2013, Iran and the P5+1 concluded a Joint Plan of Action (JPOA), originally intended to last six months, which required Iran to dilute its stocks of 20%-enriched uranium, limit new enrichment to 5% and allow for enhanced monitoring of its nuclear facilities, in exchange for limited relief from sanctions. This agreement was followed by a six-month extension. With the latest extension, the terms of the original JPOA will remain in place. A comprehensive and landmark deal is within reach, should both sides display the necessary flexibility.

Iran’s uranium enrichment capacity and the sequencing of sanctions relief continue to be the two major sticking points in negotiations over a comprehensive agreement. On these issues, the two sides have very different red lines that have been at the crux of the divide. With regard to uranium enrichment, Iran’s red line is the right to industrial-scale enrichment as part of their drive towards self-sufficiency, while the P5+1 deems industrial-scale enrichment beyond Iran’s practical needs. The P5+1 also believes that any agreement reached should last sufficiently long (at least ten years), to ensure that Iran’s breakout capacity (the time it would take to produce enough highly enriched uranium for a nuclear weapon), does not slip under one year.

The second pair of incompatible red lines concern the sequencing of sanctions relief. There has been a clear-cut difference between Iran’s demands for permanent lifting of sanctions and the suspension proposed by the P5+1. Iran expects that any irreversible concessions it makes must be accompanied by the termination and not simply the suspension of sanctions. Under the latter scenario, Iran would fail to attract the foreign direct investment its economy desperately needs. For the P5+1, sanctions are their key leverage and the combination of UN, EU and US sanctions means that relief in one area might weaken the entire sanctions regime.

As this process enters its latest stage, there are growing domestic pressures on both sides that may undermine negotiations and cause the issue to escalate. On 6 January 2015 Republicans will assume control of both houses of Congress for the first time in eight years, placing the process at risk to congressional activism. Despite the likelihood that President Obama would veto such action, Congress could pass delayed-trigger sanctions that would come into effect in the event that Iran fails to meet agreed deadlines. This may derail the process, as a result of lost political momentum, and add to the pressure placed on Iranian negotiators to strike a deal that preserves Iranian interests. At the same time, there are powerful forces in Iran that oppose any deal with P5+1.

Although critics have seen the extension as confirmation that the process will ultimately fail, US Secretary of State Kerry asserted that the negotiations had made “real and substantive progress,” and EU envoy Catherine Ashton and Iranian Foreign Minister Javad Zarif stated that there remains a “credible path” towards a comprehensive agreement based on the progress made during previous negotiations and “the new ideas which continue to be explored.” Indeed, the parties have made considerable progress in Vienna, and positions have narrowed on a variety of issues over the last year.

There is an appreciation now that, after going through an “eleventh hour” exercise, positions have been clarified, and continued negotiations are necessary to reveal the parties’ true red lines that could serve as the basis for a comprehensive accord. Furthermore, as parties now engage in what will inevitably be a period of intensive diplomacy, lessons can be learned from the last 12 months. Procedural problems encountered include the simultaneous assessment of political and technical aspects of the issue and the timing constraints of multilateral negotiations. Nonetheless, much of what has been achieved lies beneath the surface, in the personal trust between negotiators and constructive direct talks between Iran and the US on the issue.

That the world will witness in 2015 a comprehensive nuclear agreement on a crisis 12 years in the making is by no means guaranteed, but the considerable progress made and lessons learned in the past year display promise that the challenges can be overcome. Ultimately, this will depend on difficult political decisions to be taken in Tehran and the P5+1 capitals, as well as technical analysis and assurances. 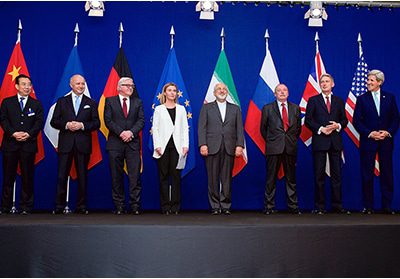 Nuclear Deal with the West
After Rouhani took office, he repeated his promises and began work to improve relations with the world on the basis of t...