Nuclear Deal with the West

The election, in mid-June 2013, of moderate cleric Hassan Rouhani (b. 1948) as president of Iran made progress in the nuclear negotiations conceivable. Rouhani defeated a range of conservative candidates to win the election in the first round, with 50.7 percent of the vote. He attracted voters with a program of moderate domestic social policies, greater openness, and promises of improvement in the dire economic situation. He also promised to try to normalize Iran’s relations with the world, which had soured under his predecessor, Mahmoud Ahmadinejad. Of course, without such a normalization—that is, solving the nuclear dispute and lifting sanctions—improvement of the economic situation would be impossible.

After Rouhani took office on 4 August 2013, he repeated his promises and began work to improve relations with the world on the basis of transparency in nuclear policy. An important first step was his nomination as foreign minister of Mohammad Javad Zarif, the former UN ambassador (2002-2007, under the reformist president Mohammad Khatami). As UN ambassador, Zarif was said to have been involved with the so-called ‘Grand Bargain’, an Iranian plan to resolve all outstanding issues between the U.S. and Iran in 2003. The plan, however, ended up unread in an American desk drawer because the then US government, under President George W. Bush, was not interested in normalization of relations with Iran. Also, in a break with standing policy, Rouhani put the nuclear file in the hands of Zari frather than the official nuclear negotiator.

In his speech to the General Assembly of the United Nations on 24 September, Rouhani offered immediate ‘time-bound and results-oriented’ negotiations aimed at removing any ‘reasonable concerns’ about the Iranian nuclear programme. He assured the participants that ‘peace is within reach’, but international sceptics, prominent among them the government of Israel and a majority of members of the US Congress, continued loudly to express their doubts about Rouhani’s willingness and ability to bring about change. In his speech to the General Assembly a week later, Israeli prime minister Benyamin Netanyahu repeated his accusations that Iran was building an nuclear bomb, an assertion always denied by Tehran. He called Rouhani ‘a wolf in sheep’s clothing, a wolf who thinks he can pull the wool over the eyes of the international community’.

In his speech on 24 September, however, US president Barack Obama stressed his wish to reach a diplomatic solution of the Iranian controversy—that is, to force Iran, through negotiations, to provide guarantees that it was not building a nuclear bomb. An expected meeting in New York between Obama and Rouhani did not materialize—possibly because the Iranian side got cold feet at the last moment—but the two leaders did, in the end, speak by telephone, which was a first.

In another first, Zarif and US secretary of state John Kerry on 27 September joined a high level meeting in New York on the margins of the UN session of P5+1, consisting of the permanent members of the UN Security Council plus Germany, which is negotiating with Iran about its nuclear program, under the leadership of Baroness Catherine Ashton, the EU foreign policy chief. This time, the American and Iranian representatives did shake hands. After the meeting, the parties sounded cautiously optimistic. Kerry detected a ‘very different tone’ from the Iranian government, and Zarif, in a comment more noncommittal than Kerry’s said the talks were ‘very constructive’ and ‘very substantive’.

Just as the US government had to cope with resistance to its dealings with Iran from its important ally Israel and a majority in Congress, the Iranian government met strong domestic opposition to its policies from conservative groups, especially in the Revolutionary Guard and Parliament. From the beginning of his presidency, however, Rouhani could count on the open support of Supreme Leader Ayatollah Ali Khamenei, who said, in his speech on the occasion of the inauguration of the new president in August, ‘I support the issues raised by the new president about conducting foreign policy wisely and rationally. Of course, we have enemies with whom rationality doesn’t work, but given the noble objectives of the Islamic Republic, we have to pursue these goals seriously’.

This stands in striking contrast to the presidency of the reformist Mohammad Khatami, who, from the beginning, encountered resistance to his policies from the Supreme Leader, in part because Khatami’s election was a complete surprise for the powerful conservative faction under Ayatollah Khamenei, which had counted on the election of its candidate, the speaker of the parliament Nateq Nouri. This time the Supreme Leader had in fact beforehand approved  in calculated Rouhani’s election by not pressing conservative candidates to leave the race, thus leaving the field to one instead of four conservatives. Of course, although Rouhani is more moderate than his four adversaries and did hold important offices under Khatami, he is a prominent and trusted member of the Iranian Islamic political system.

After a series of more or less successful preparatory meetings, Iran and the P5+1 reached a ground-breaking interim deal (for six months) in Geneva on 24 November, called officially the Joint Plan of Action. It consisted of a freeze of important portions of the Iranian nuclear programme in exchange for a relaxation of sanctions. Perhaps most important was the implicit acceptance by the P5+1 of Iranian uranium-enrichment capabilities, which the P5+1 had long refused to do. It had become clear to everyone, however, that no deal would be possible without the toleration of some Iranian enrichment capability. Iran had consistently emphasized its ‘absolute right’, to enrich uranium in accordance with the Nuclear Non-Proliferation Treaty (NPT), of which Tehran is a signatory. In return , Iran agreed not to enrich above 5 percent and to dilute all stocks of uranium above 5 percent or to convert it into uranium dioxide. Iran also accepted, among many other provisions, stricter inspections by the International Atomic Energy Agency. The Israeli government, members of the US Congress, and Saudi Arabia voiced strong criticism of the deal, which they condemned as too lenient. They continued to demand the total ban of Iranian enrichment and, in fact, a total halt to its nuclear programme.

The agreement was implemented on 20 January 2014. In the meantime, Ayatollah Khamenei grew more critical of the West, especially the US. In his speech on 9 February 2014 commemorating the anniversary of the Islamic Revolution, he said that the US remained fundamentally Iran’s enemy, as Washington continued to seek regime change in Tehran. At the same time, however, he continued to restrain critics of Rouhani’s policies. On his website he wrote: ‘No more than a few months have passed since the government took office. Authorities should be given the opportunity to push forward strongly. Critics should show tolerance towards the government.’ Conservative voices continued, however, to try to make life difficult for Rouhani. In mid-March, for instance, conservatives voiced sharp criticism of Catherine Ashton, after she met human-rights activists during a visit to Tehran. Foreign Minister Zarif felt compelled to cancel a dinner with Ashton on 16 March,  the night before new nuclear talks in Vienna.

After the Vienna talks of 17-19 March, however, both Zarif and Ashton voiced optimism about the conclusion of a permanent agreement before 20 July 2014. 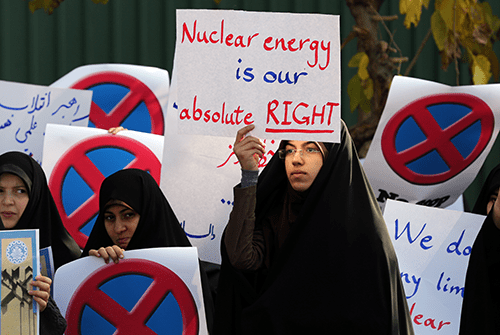