The nuclearization of the Middle East was initiated by Israel‘s nuclear efforts. Israel’s nuclear program dates back to the early years of the state. Apart from scientific research, the program is almost entirely military in nature. On the basis of a conversation with the current President Shimon Peres, the American journalist Seymour Hersh mentions 1952 as a critical year.

At that time, Prime Minister David Ben-Gurion appears to have told a select group of ministers and officials that, in the long run, the only way to bridge the vast demographic, economic, and military gap between Israel and its Arab neighbours was to build nuclear weapons. Ben-Gurion susequently steered Israel’s nuclear project and in 1952 established the Israeli Atomic Energy Commission (IAEC). 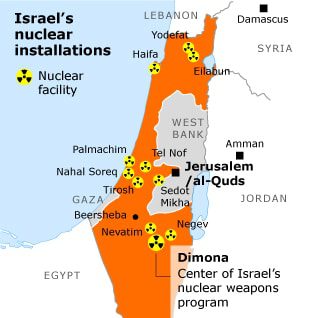 In 1964, at a meeting between Prime Minister Levi Eshkol and American President Lyndon B. Johnson, it was agreed that Israel would not test the bomb or officially admit its existence. In return, the United States would turn a blind eye. This policy, known as ‘the bomb in the basement’, remains in force. The introduction of the Nuclear Non-proliferation Treaty (NPT) in 1968 and the Nixon-Meir (President Richard Nixon-Prime Minister Golda Meir) secret deal of September 1969 made this policy possible. The NPT’s objective is to prevent the spread of nuclear weapons and weapons technology.

Israel has not entered into the NPT, as Israel pre-conditioned its signing on the US provision that it would guarantee Israel’s security at any time, linking regional peace to the Israeli withdrawal from the occupied territories. The government of Israel at the time saw nuclear weapons as essential to providing for Israel’s security – giving them up would be more detrimental than losing a measure of support from the United States.

According to the American expert Anthony Cordesman, Israel’s nuclear arsenal now probably numbers just over a hundred nuclear devices ranging from tactical devices to ones capable of developing as much as one megaton of TNT. The latter include ballistic missiles, fighter-bombers, submarines, and possibly cruise missiles.

Jane’s Defence Magazine claims that, in terms of the size of its arsenal, Israel is now the world’s fifth nuclear power. Its forces are capable of turning much of the Middle East, including cities as far away as Tripoli (Libya) and Tehran, into radioactive heaps of rubble within less than an hour after the order has been given.

During the 1990s there was increasing discussion of the establishment of a Middle East Weapons of Mass Destruction Free Zone (MEWMDFZ). Subsequently, during the 1995 NPT Review Conference, states parties adopted a Resolution on the Middle East calling upon all states in the region to accede to the NPT and place their nuclear facilities under IAEA safeguards.

The resolution ‘endorses the aims and objectives of the Middle East peace process and recognizes that efforts in this regard, as well as other efforts, contribute to, inter alia, a Middle East zone free of nuclear weapons as well as other weapons of mass destruction.’ To Tel-Aviv, a Middle East WMD-Free Zone is preconditioned to regional peace, while the Arab states assert that peace can only occur after Israel renounces the right to possess nuclear weapons. Israel, with the support of the United States, has resisted accepting full-scope IAEA safeguards prior to a comprehensive peace settlement.

Israel Politics International Affairs Nuclear Programs
You may also like