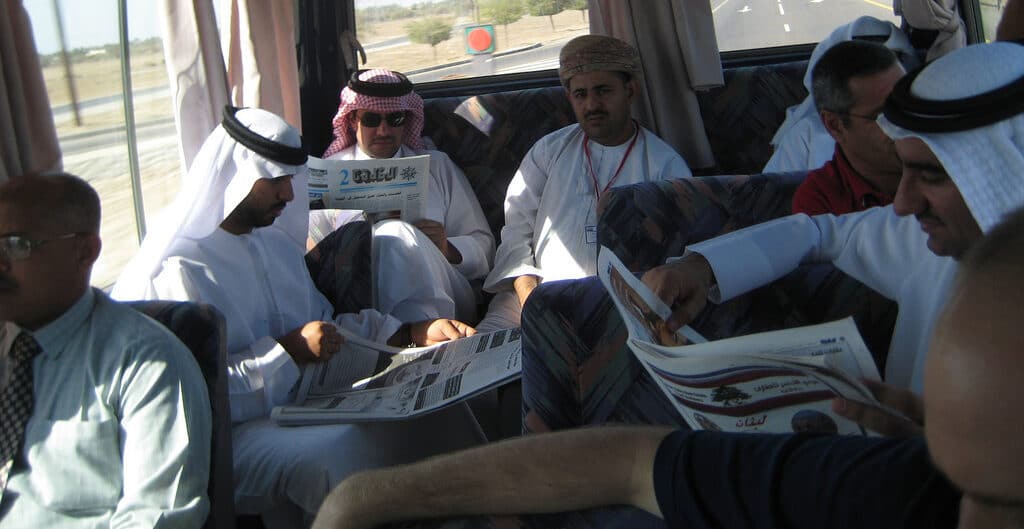 The first Omani-owned media outlets emerged on the Tanzanian island of Zanzibar, which was part of the Omani Sultanate between 1832 and 1964. Omanis such as Abu Muslim al-Bahlani established newspapers here as early as 1911, with the publication of al-Najah. Several other press titles followed but they would all become inactive after the end of Omani rule in Zanzibar.

During the reign (1932-1979) of ultra-conservative Sultan Said III bin Tamur, Oman’s own mass media environment was practically non-existent. In fact, Oman was the  last country in the Middle East to have its own radio station and daily newspaper.

Radio was the first mass media device to be put into operation in 1970, after Said’s son Qaboos’ palace coup, initially broadcasting for five hours per day, mainly to residents in the capital Muscat.

Then came print publications, with al-Watan being the first newspaper to be published in the sultanate in 1971. Television broadcasting began in 1974 and was initially restricted to Muscat but coverage was soon extended as infrastructure developed.

As the Omani media environment gradually grew, the government also sought greater regulation. Human rights organization Freedom House refers to the 1984 Press and Publications Law as ‘one of the most restrictive statutes of its kind in the Arab world’, allowing the government to censor any media material deemed politically, culturally or sexually offensive.

With the introduction of satellite television technology in the late 1980s, Omanis became exposed to a greater choice of media outlets and satellite channels soon became significantly more popular than the state-owned Omani broadcasts. Oman’s media environment became even more diverse in 1997, when the government allowed the sale of foreign newspapers and magazines that had previously been considered critical of Oman or the sultan.

However, this greater media openness for foreign publications contrasted with increased repressive measures enacted against the domestic press a year earlier. The 1996 Basic Law prohibited the publication of content that incites ‘public discord, violates the security of the state or abuses a person’s dignity or rights’.

Dial-up internet connections were introduced in 1997, but due to the country’s relatively high rural population and lack of infrastructure in certain areas, initial uptake was slow. An increase in service providers and broadband and wireless technology have since improved internet penetration.

Oman’s 21st-century media environment now includes more than 20 print publications as well as several television and radio stations, each with private and state-owned entities following the introduction of a limited number of private broadcasting licenses in 2004.

Oman’s media environment is not conducive to freedom of expression, and it ranks 125th out of 180 countries in Reporters Without Borders’ 2016 World Press Freedom Index. The 1996 Basic Law guarantees freedom of expression and freedom of the press, but as with other Gulf states these guarantees are regularly overlooked or contradicted by other legislation. Journalists can be fined and sentenced to jail for criticizing the sultan, the ruling family or Islam.

The government maintains the right to close down any media outlet at will, and state-owned organizations continue to dominate the media thanks to their vastly superior resources. Self-censorship is common as journalists are required to obtain a licence, renewable each year, in order to work for an Omani media outlet. Writers and broadcasters who fall foul of the government are sometimes banned from operating.

With the increasing popularity of the internet, Omani authorities initially demonstrated a greater degree of tolerance towards criticism of government policies and officials online than in the traditional mass media. However, the 2002 Telecommunications Act means that the government can prosecute citizens for any message sent through any communications channel if it is deemed to ‘violate public order and morals’. The BBC also remarks that Omani authorities monitor private telephone calls, emails and internet chat rooms.

The Omani authorities also continue to arrest journalists publishing information contrary to the interests of the government. In August 2016, authorities ordered the closure of al-Zaman newspaper and arrested three of its journalists – two of whom have subsequently received jail terms – for publishing a report claiming that the chairman of the Omani Supreme Court had unlawfully influenced a trial verdict. The decision to close the newspaper was subsequently reversed.

Online bloggers and commentators are also pursued. In February 2016, former Omani diplomat Hassan al-Basham was sentenced to three years’ imprisonment for a series of political and religious-orientated Facebook and Twitter posts that were considered to be insulting to God and the sultan.

In the same month, an artist named Sayyid Abdullah al-Daruri was handed a three-month prison sentence for stressing his Dhofari roots in a Facebook post. Dhofar is a politically sensitive region of Oman, which staged a rebellion in the 1960s and 1970s.

Television in Oman was monopolized by the state for 30 years until a 2004 decree allowing the licensing of a private channel (as well as private radio stations). Oman’s domestic television environment consists of the following:

Following the introduction of private radio licences, private stations must adhere to the broadcasting regulations imposed by the state, including  strict controls and limitations over the number of news broadcasts and general content. As a result, the most successful private stations mainly broadcast music, such as the Arabic-language al-Wisal and Hala FM, and the more Western-orientated Hi FM and Merge FM.

The press is significantly less popular than television as a source of news for Omanis, with total daily circulation estimated at 274,000 copies in 2010. Nevertheless, the press remains a popular outlet for advertising, which has enabled private publications to continue operating despite relatively low sales. The majority of readers are government employees and the staff of state-run companies since all government entities subscribe to newspapers.

Facebook has grown increasingly popular in recent years, with the percentage of the Omani population (around 5 million in December 2016, of whom 2 million are expatriates) with registered accounts increasing from 18.9 per cent of adults in 2012 to 27.9 per cent, or over 800,000 users, in 2014. This figure dwarfs the number of registered Twitter users in the country, although this has also increased from around 14,000 in 2012 to 38,000 in 2013.

YouTube was the second most popular website in Oman in 2014 and played a particularly prominent role in documenting the 2011 protests in the country, due to the relative anonymity afforded to its users.

Facebook and Twitter were also important outlets during this time, but users of these platforms were pursued more aggressively by the Omani authorities. There are now few publicly accessible Facebook pages affiliated with anti-government causes in Oman, but a handful still refer to the 2011 protest movement or continue to highlight the cases of political prisoners detained in the country.

Omani media outlets have embraced the online environment, with traditional state-owned and private outlets quick to establish websites and publish or broadcast content worldwide via the internet. Furthermore, a number of dedicated online publications have been founded.

Internet chat rooms and forums are commonly used in Oman. Sabla is described by the BBC as Oman’s ‘most popular political website’. It serves as an online chat room, forum and e-commerce hub. Here, a relatively high degree of criticism and dissent is tolerated by the Omani authorities who use Sabla as an indicator of public sentiment and a potential early warning system against popular unrest.

The government monitors all chat rooms active in the country and imposes temporary shutdowns if excessive dissent is voiced. Sabla is the dominant online forum in Oman, leading to the demise of other, less popular services such as Farrq and al-Harah.

For Omani bloggers and social media users, a distinction is often made by the Omani authorities between content published in English and Arabic. A greater degree of tolerance is typically afforded to English-language content, whereas criticism or offensive language published online in Arabic tends to be punished far more severely.

Below are the latest articles by acclaimed journalists and academics concerning the topic ‘Media’ and ‘Oman’. These articles are posted in this country file or elsewhere on our website: 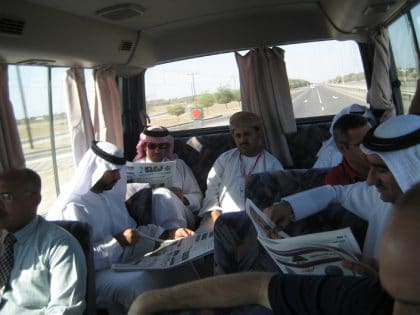 With the introduction of satellite television technology in the late 1980s, Omanis became …