The Basic Law promulgated in 1996 guarantees freedom of expression and of the press, within the limits of the law. According to Freedom House, Oman’s press freedom ranks 71 out of 100 and has the status ‘Not free’.

Local newspapers are not subject to censorship, according to the Ministry of Information. In practice private and state-run print and broadcast media tend to support the government’s views, even though ‘constructive’ criticism of the government is permitted. It is evident that journalists also practice self-censorship, in view of the situation. It is noteworthy that many of the managerial positions in this branch are staffed by expatriates. 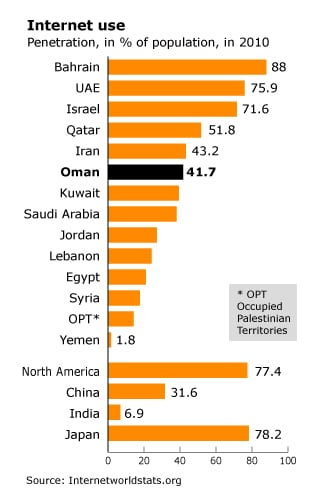 Oman’s Telecommunications Act allows for authorities to prosecute individuals for any kind of message, sent via any means of communication, which violates public order and morals, or is harmful to a person’s safety. According to the law ‘every person who sends a message via a means of communication that is contrary to the governing system and public morals (…) shall be punished by a prison sentence of not more than one year and a fine of not more than 1,000 Riyal’ (2,600 USD).

In 2006, Abdullah al-Riyami, a journalist and poet, experienced harassment and intimidation from government authorities after publishing critical comments on the Omani government. In 2006, Mohamed al-Harthy and another writer were sentenced to pay a fine, while a third person was sentenced to a month in prison in addition to a fine of 15,000 USD after they were charged with insulting two government officials on the Internet forum al-Sabla al-Omaniya owned by Said al-Rashidi. Al-Rashidi subsequently shut down his website.

Reporters Without Borders (2009) has drawn attention to these issues. However, the organization also maintains that ‘the Gulf is often seen as one of the Middle Eastern regions where respect for freedom of speech and publication is developing best’. There are no limitations on media access to and use of international news services, whether through satellite television or the Internet. The Internet Service Manual has laid down rules for use of the Internet. The government can censor politically sensitive and pornographic content.

The Journalists’ Association was inaugurated in 2006. It operates under the supervision of the Ministries of Social Development and Information. The objectives include nurturing new talent and spreading awareness of unbiased reporting of events. According to journalists the Association is not yet geared for looking after their interests.

In principle, all inhabitants of Oman have access to the Internet through the national telecommunications company. There are some 1,250,000 Internet users (mid-2010), or 42 percent of the population (compared to 10 percent in 2005).