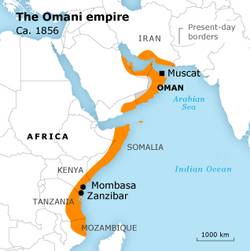 In the early 16th century a prosperous maritime network connected the countries bordering the Persian Gulf such as Iraq, Iran, and Pakistan with Africa, India, and the Far East. Oman was actively involved. Circa 1490, Omani seafarer Shihab al-Din Ahmad ibn Majid compiled the famous Book of Profitable Things concerning the First Principles and Rules of Navigation, which was used by many navigators in the region. Vasco da Gama, for example, is known to have used it when crossing the Indian Ocean from Mombasa in Africa to India.

With the arrival of the Portuguese the situation in the region changed drastically. Pursuing control of the eastern trade routes, the Portuguese under Alfonso de Albuquerque (later viceroy of India) sacked the Omani ports from Ras al-Hadd to Hormuz in the Gulf on their way to India in 1507. For more than a century, the Portuguese were a dominant force in the regional trade network, although they did not aim for political power. Several forts were constructed by the Portuguese in Oman, often on older structures, such as al-Mirani and al-Jalali in Muscat. Their architecture influenced later building styles in Oman. 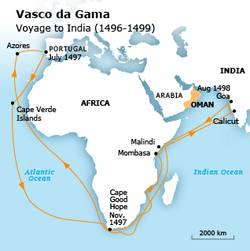 Portuguese control began to decline in the 17th century, partly due to competition from the Persians and European powers such as the Dutch and the British, who arrived in the region to pursue their own commercial goals. Successive rulers in Oman were able to evict the Portuguese from their ports and contributed to their eventual expulsion from India and East Africa. The last Portuguese stronghold in Mombasa fell to the Omanis in 1698.