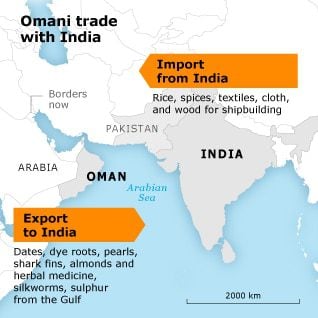 Throughout history, India and Africa formed the basis for Oman’s intercontinental exchange. Evidence of trade links with India, Oman’s major trade partner, dates back to the third millennium BCE. In the 10th century CE, the Arab historian al-Masudi stated that ten thousand Muslims – Bayasira (from Pakistan), Omanis, and Basrans – were living on the western coast of India. Oman obtained its staple food of rice from India. Other imported goods were spices, textiles, cloth, and wood for shipbuilding. Omani dates, dye roots, pearls, shark fins, almonds and herbal medicine were exported to India, as well as transit goods from the Gulf such as silkworms and sulphur.

In the 18th and 19th century, 80 percent of the trade in Muscat, which virtually controlled the passage into the Persian Gulf, was with India. Trade networks were mostly in the hands of Indians in Oman, such as the Khoja and people from Gujarat, whose descendants still live in the country. They worked with partners or agents in Mumbai. The Indian traders also followed the Omanis to East Africa. The merchants and sailors worked together to compete with the European powers in the Indian Ocean, for example in the coffee trade from Mocha in Yemen. 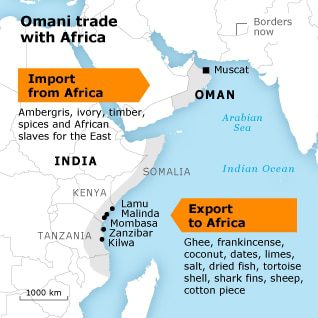 Oman’s ties to countries in East Africa are equally intensive and long-standing. Omanis settled along the African coasts in the 7th century. In the 9th century, Arab merchants were involved in the gold trade in present-day Zimbabwe. Omanis, among others, brought Ibadi Islam to Eastern Africa. After they had driven the Portuguese out of the African ports, they expanded their trade network in this region. In the 17th and 18th centuries the entire coast of East Africa between Mogadishu and Madagascar, including the islands of Zanzibar and Kilwa, came under Omani control. Omani governors were installed in Mombasa, Malindi, Kilwa, and Lamu. At times, they assumed independence from their home country.

Goods exchanged between Africa and Oman included ghee, frankincense, coconut, dates, limes, salt, dried fish, tortoise shell, shark fins, sheep and cotton piece from Oman, and ambergris, ivory, timber, and spices from Africa. Omani traders from Nizwa, Ibri, Sur, Muscat and Matrah were involved in this trade network in the 19th century. Most of these goods were destined for countries such as China, India, and Iraq. Omanis also played an important role in the slave trade between Africa and the East, whose main market was on the island of Zanzibar. Market revenues accrued to the Omani ruler. Slaves from Africa were already being transported to Iraq in Abbasid times.