Given Kuwait’s dependence on oil, it seems appropriate to begin the country’s history in the Jurassic period (208-146 million years ago). Tectonic processes during the Jurassic and the Cretaceous (146-165 million years ago) periods trapped huge deposits of organic material beneath caps of impenetrable rock, resulting in the creation of huge underground oil reservoirs.

During these millions of years, the surface area of present-day Kuwait was being formed by the alluvial sediments of a no-longer existent river. This sediment was rich in minerals, and the concentration of these minerals intensified when, at the end of the last ice age, about 11,500 years ago, the climate began to warm.

Rising and evaporating groundwater brought these minerals to the surface in ever-larger concentrations, contaminating the soil and preventing any sustainable agriculture.

While much of the Fertile Crescent was entering the agricultural era about 11,000 years ago, no such activity took place in what is now Kuwait. Nonetheless, the area was almost certainly in use, as seasonal grazing grounds for nomadic herders, and, while there were no natural springs that permitted permanent settlement inland, the rich fishing grounds off Kuwait’s northern coasts attracted small fishing communities.

The Euphrates and Tigris rivers drain into the Gulf just north of Kuwait’s borders. The nutrient-rich soil they deliver to the northern Gulf attracts a huge variety of fish and shellfish. This river delta also provided fresh water that could be transported down the coast by boat, an activity that continued well into the 20th century. The remains of one such early fishing community have been found at Ras al-Subiya. Stone walls, potsherds, and the remains of a boat discovered at this site hint at links with the Ubaid culture (4500-4000 BCE) of Mesopotamia. 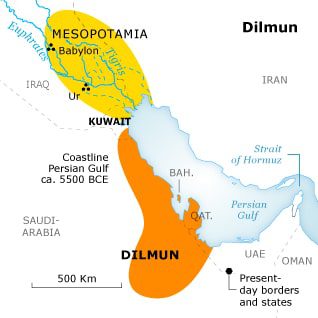 More substantial remains of an early settlement have been found on the island of Failaka, at the mouth of Kuwait Bay. Since 6000 BCE the sea level in the Gulf had been falling, and human habitation on low-lying Failaka became feasible around the middle of the third millennium BCE.

The island’s attractions were obvious: it was located at a strategic point on the coastal trade route from Mesopotamia to the present-day United Arab Emirates. Being an island, it could be defended much more easily against Bedouin raiders than could site on the mainland surrounding Kuwait Bay.

On the tells of south-western Failaka have been found the remains of a Bronze Age trading settlement established around 2300 BCE. Archaeological remains are also present of the religious culture thriving in the period of the Dilmun civilization, which around this time probably centered on present-day Bahrain. 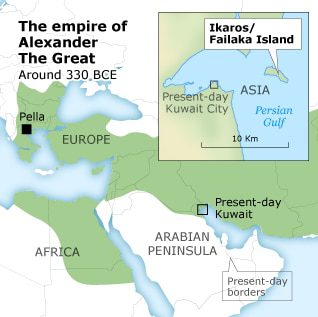 The power of Dilmun declined after 1600 BCE. Rising sea levels during the second half of the second millennium BCE also contributed to the fact that around 1000 BCE Failaka appears to have been completely deserted. The age-old cycle of rising and falling sea levels in the Gulf continued to influence local settlement patterns.

When Nearchus, admiral of Alexander the Great, arrived at the head of the Gulf in 324 BCE, the water level had dropped again, below the present level. The area of the island Alexander himself is said to have named Ikaros was thus larger than it is today.

A Greek trading colony was established on the island, and when Alexander died in Babylon in 323 BCE and his empire collapsed, Ikaros/Failaka retained its Hellenistic identity. Its inhabitants, including Arabs and Persians, continued for some centuries to speak Greek. The modern name Failaka may come from the classical Greek fylakion, ‘outpost’.