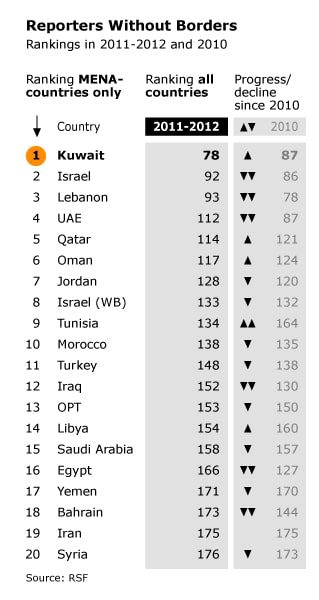 The sophisticated atmosphere of Kuwait is due, in no small part, to its outspoken and diverse private media, especially the printed press. The Kuwaiti Constitution guarantees freedom of the press and freedom of expression, albeit within the limits of the law. The latter condition is tricky, however, because it has regularly been used by the authorities to limit severely the freedom of the press in practice.

Local journalists, bloggers, and academic writers engage almost automatically in self-censorship when touching on sensitive subjects such as Islam and the power of the royal family, especially the Emir and the Crown Prince. The Censorship Department of the Ministry of Information scans all imported media, literature, and films for ‘immorality’.

Domestic material is reviewed and censored by the Printing and Publishing Office of the same ministry. The authorities can also be expected to interfere when journalists or bloggers ‘insult’ friendly foreign heads of state, create ‘domestic unrest’ or ‘threaten national security’ in any other way.

While press offences in Kuwait are formally no longer punishable by prison sentences but only by (often substantial) fines, journalists nevertheless continue to risk jail sentences under the provisions of the criminal law: any Muslim citizen can file criminal charges against any other citizen ‘defaming’ Islam, the ruling family, or public morals.

Both citizens and the state continue to abuse this article of the criminal law for political purposes. A Kuwaiti who insulted the Emir in an Internet forum was sentenced to the maximum penalty for ‘libel and slander’ – two years in prison – in November 2007. In November 2009, the Kuwaiti lawyer and journalist Muhammad Abdel Qader al-Jassem was arrested under the same article.

The complaint was filed by the Prime Minister himself, Sheikh Nasser al-Mohammad al-Sabah, whom al-Jassem had reportedly insulted in a diwaniya in October that year. The criminal charge against al-Jassem may be part of the present government crackdown on the inciting of ‘political instability’ by diwaniyas. This campaign began in the spring of 2008 and has included the demolition of the private buildings in which the gatherings took place.

Since 2005, Kuwait has earned the highest ranking of all Arab countries on the annual Press Freedom Index of Reporters Without Borders. In 2009, it surpassed Israel as the country with the greatest press freedom in the Middle East. In 2011 Kuwait ranked 78th and was the top-ranking country in the Middle East.

Kuwaiti journalists are not only threatened with fines and imprisonment: In October 2009 Zayed al-Zaid, publisher of the news website www.alaan.cc well-known for his anti-corruption stance, was beaten by an unknown assailant as he left a local conference on transparency. A month before that, local journalists had been attacked by employees of the Ministry of Higher Education. In 2001 Hidaya Sultan al-Salem, then the editor of the feminist weekly al-Majalis, was assassinated for her criticism of tribal culture.