The Tunisian Revolution in 2010 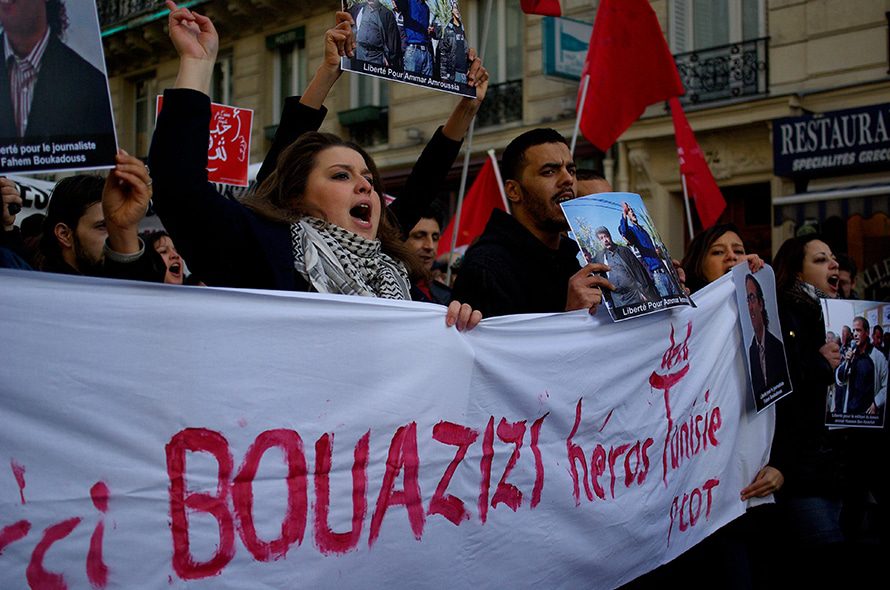 Political disillusionment, caused by fierce police suppression and economic hardship – most evident in the high poverty and unemployment rates, particularly among Tunisia’s youth – had long undermined the legitimacy of the autocratic Ben Ali regime in the eyes of most Tunisians. When, on 17 December 2010, a street vendor named Mohamed Bouazizi, a resident of the impoverished town of Sidi Bouzid, protested his plight by self-immolation, protests were sparked that led eventually to a general uprising against the Ben Ali regime.

In the beginning, protests were limited mostly to Tunisia’s south, the country’s poorest region, where the police tried to contain demonstrators through arrests and extreme violence. Eventually, however, through media and online platforms such as Facebook and Twitter, news of the clashes reached other parts of the country, which responded with similar uprisings. The Tunisian General Labour Union (Union Générale Tunisienne du Travail, UGTT), Tunisia’s powerful trade union, as well as Facebook and Twitter facilitated the organization of mass protests that would rock the entire country.

What was initially a protest of impoverished and marginalized people came to involve all social groups – including professionals such as lawyers, doctors, and teachers – who took to the streets protesting their economic situation and demanding more political rights. Ben Ali’s response to what would become a general uprising against his regime was at first marked by the use of violence and public threats of punishment, and he blamed national and international media for spreading false information and supporting the actions of what he called ‘extremists’.

When this failed to contain the protests, which became increasingly powerful and widespread, the regime was forced to resign, and Ben Ali and his family fled to Saudi Arabia on 14 January 2011.