Throughout its history, Bahrain’s media has remained almost entirely under the auspices of the ruling Sunni elite. The country’s power structure and demographics – a Sunni dynasty reigning over a Shiite majority – mean that the government has traditionally placed particular emphasis on the media as a propaganda tool, and has sought to minimize dissident Shiite voices as much as possible through its close control of the sector.

The kingdom’s first newspaper, Jaridat al-Bahrain, was established in 1939 (ceasing publication in 1944), and the country’s first radio broadcast followed the year after, although the modern media environment truly began following independence in 1971. The regulatory body Bahrain Radio and Television Corporation (BRTC) was established in the same year, and television broadcasting began in 1973. In 1976, the country’s oldest active newspaper, Akhbar al-Khaleej, was set up, along with the Bahraini news agency.

As with the rest of the Middle East, Bahrain’s television environment has been heavily influenced by the rise of satellite broadcasting in the region in the 1980s and 1990s. The capital Manama was host to the Orbit Communications Company, a Saudi-owned satellite TV network, between 1994 and 2009. Satellite TV penetration in the kingdom was estimated at 51 per cent in 2010.

Until 2002, there were only two active newspapers (in addition to their English-language sister publications), both of which operated under the then Ministry of Information. In 2010, the Ministry of Information was replaced by the Information Affairs Authority (IAA), with the remit of regulating the kingdom’s press and controlling the BRTC. The 2002 constitution ostensibly ushered in a new era of press establishment in the kingdom, and as of 2014, the IAA listed seven daily and 15 weekly active publications.

Bahrain has one of the highest internet penetration rates (92.7 per cent in 2016) in the Middle East, and this degree of online connectivity has altered its media landscape considerably. Social networks such as Facebook and Twitter, along with video-sharing platforms such as YouTube, initially gave opposition groups inside the kingdom an unprecedented means to express their opinion, although the government responded harshly by shutting down websites and arresting outspoken bloggers.

Bahrain’s media environment is one of the most repressive in the Middle East. Article 23 of the 2002 constitution stipulates that ‘every person has the right to express his or her view or opinion either orally or in writing or through other means’. However, a press law enacted in the same year effectively negates this constitutional provision, imposing up to five years’ imprisonment upon those deemed to have insulted Islam or the king, incited actions contrary to the security of the state or called for change in government. In 2014, the law was updated to increase the maximum prison term to seven years for insulting the king, and in 2015, a two-year prison term was introduced for ‘insulting‘ state institutions such as the parliament and security forces.

Following the quelled mass protests of 2011 and subsequent state of emergency, the kingdom became a more hostile environment for journalists. Authorities began arresting writers for publicly airing grievances against the government, and 95 journalists were fired without explanation in the immediate aftermath of the uprising. Post 2011, journalists are increasingly being convicted on charges of participating in demonstrations or under anti-terror legislation, which can result in life sentences.

In 2015, the government temporarily closed down Bahrain’s only independent newspaper al-Wasat on the grounds of ‘repeated dissemination of information that affects national unity and the kingdom’s relationship with other countries’. The newspaper’s co-founder, Karim Fakhrawi, died in state custody in 2011.

In 2016, Bahrain’s Photographic Society was shut down by government authorities, who claimed its members were acting ‘contrary to the law and public order’. In November 2015, freelance photographer Sayed Ahmed al-Mousawi was charged under anti-terror laws and given a ten-year jail sentence for photographing anti-government demonstrations.

Bahrain also has a zero-tolerance policy toward criticism of its regional allies. In the last two years 2015 and 2016, human rights defenders and political commentators have been jailed for questioning the international legality of Saudi Arabia’s military campaign in Yemen.

All domestic channels are regulated by the BRTC, and private broadcasting licenses are not granted. The BRTC operates five terrestrial television networks. Satellite television is popular and al-Jazeera and al-Arabiya constitute the main sources of broadcast news in the country, yet the government maintains tight control over which satellite channels are available. In 2011, the authorities jammed the satellite signal of London-based pro-opposition outlet LuaLua TV prior to its launch, and also proceeded to block its internet livestream within the kingdom.

In 2015, al-Arab TV, a new Saudi pan-Arab satellite channel owned by Saudi billionaire businessman al-Walid bin Talal, began broadcasting from Manama. The channel was closed by Bahraini authorities hours after it began broadcasting, on the grounds that it had not been granted ‘the necessary permits’. One of the channel’s first guests had been Khalil Marzuk, a notable Bahraini opposition figure.

Bahrain’s first radio station was established in 1955, and an English-language station was created in 1977. At present, BRTC operates five national stations and holds a near-monopoly on radio broadcasting. However, in 2006 a license was granted to a private company to run Voice FM, a radio station catering to Indian expats.

All of Bahrain’s major newspapers are privately owned, however the government wields strong influence and actively appoints the boards of directors for several major publications. Al-Wasat is the only newspaper that operates partially outside of state control. The websites of Bahrain’s two major English-language newspapers also publish content tailored specifically to the kingdom’s largest expat community, from the Indian subcontinent. The following newspapers are popular in Bahrain:

Social media is hugely popular in Bahrain, with an estimated 800,000 registered Facebook users (58 per cent of the population) in 2016. The number of active Twitter users stood at 62,000 in March 2014, a marked decline on previous years, likely owing to the post-2011 security crackdown on social media.

Social media in Bahrain has been used as a means of sharing information that would otherwise have fallen foul of the kingdom’s publication laws. In particular, Bahrain’s Shiites have made extensive use of social networks to organize, stage and document anti-government protests, often in collaboration with Shiite opposition groups in Saudi Arabia.

However, as a result of the 2011 uprising, and the perceived role played by social media networks in allowing Shiite opposition groups to organize and communicate, the Bahraini authorities have since launched a targeted campaign against social networks. This crackdown has prompted many social media users to use pseudonyms or exercise self-censorship when posting online, but arrests are still common. One of the most prominent cases is that of Nabeel Rajab, founder of the NGO Bahrain Center for Human Rights, who has been imprisoned intermittently since 2011. In 2015, he served two months of a six-month sentence for ‘offending national institutions‘ on social media. In 2016, he was re-arrested and is still awaiting trial for further social media infringements, including criticizing Saudi Arabia’s military campaign in Yemen.

Although Rajab’s case has received international coverage, Bahrain continues to enforce its zero-tolerance approach to online dissent. Earlier in 2016, the Interior Ministry announced the arrest of several citizens on the vague charge of ‘misusing social media‘ to ‘incite people or instigate people to abuse others’.

The online environment in Bahrain remains closely controlled, without true freedom of expression. A 2013 survey conducted by North Western University found that only 38 per cent of Bahraini respondents agree with the statement: ‘On the Internet, it is safe to say whatever one thinks about political affairs’.

The American human rights organization Freedom House outlines several ways in which the Bahraini government maintains control over the internet. The government has reduced nationwide internet speeds during significant anniversaries and events, whereas state authorities can block websites without a court order. In 2010, Human Rights Watch reported that the government had shut down at least 1,000 websites, blogs and social media pages. Freedom House has also documented the state’s use of public relations firms and ‘cyber armies‘ in an attempt to skew online discussions and trending topics in favour of the government, and discredit opponents.

Bahrainis’ prolific internet use has spawned various online publications and news websites catering to opposition views, such as Bahrain Mirror and Bahrain Online, as well as human rights organizations such as The Bahrain Center for Human Rights. Although such websites have long been banned by Bahraini internet service providers, local citizens are able to access them using proxy servers and VPNs.

Below are the latest articles by acclaimed journalists and academics concerning the topic ‘Media’ and ‘Bahrain’. These articles are posted in this country file or elsewhere on our website: 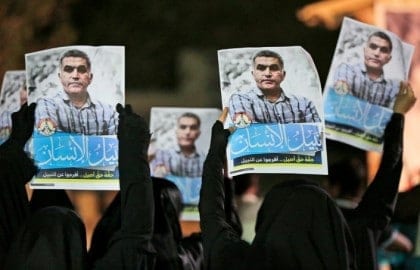 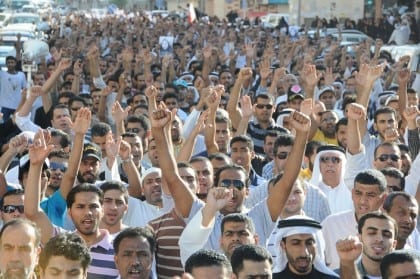