The original inhabitants of North Africa apparently descended from Neolithic people who migrated there between 15,000 and 10,000 BCE. They were nomadic herdsmen who occasionally cultivated land and hunted.

The earliest evidence of (semi-)permanent settlements in Libya dates back to 8000 BCE. The main source of knowledge about this period is the petroglyphs in the Acacus Mountains (near Ghat), Wadi Matkhandoush (south-west of Sabha), and Tassili n’Ajjer and the Hoggar Mountains (both in Algeria). 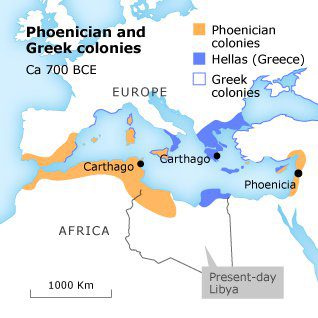 The Phoenicians were the earliest arrivals. In the 12th century BCE, international traders based in what is now Lebanon criss-crossed the Mediterranean. Around 700 BCE, Phoenicians who sought to expand their trade in gold, silver, ivory, and raw materials established settlements at Lebda (Leptis Magna), Oea (Tripoli), and Sabratha. The name Tripoli reminds us of the prosperity of these three ancient cities, from which the Phoenicians traded with the Amazigh tribes in the interior. These remains of the ancient civilizations in Libya – Leptis Magna (Lebda), Sabratha, Apollonia (Marsa Susa) and the port of Cyrene – are now important tourist attractions.

The Phoenician colonies were governed from Carthage, in modern Tunisia, which was founded in 814 BCE and, by about 400 BCE, dominated the North African coast between Tripolitania and the Atlantic. After several wars against Rome, Carthage gradually lost its importance. In 146 BCE, the Romans defeated the Phoenicians, and Carthage was destroyed: ancient accounts say it was laid waste and bestrewn with salt.

In Fezzan, the modern settlement of Germa has remnants of large cities. Archaeologists believe that these cities were outposts on trade routes, and they flourished with markets and forums for public entertainment. Their inhabitants were called Garamantes and were probably descended from the Neolithic population. Some of them were familiar with cultivation and probably came originally from Libya’s eastern oases. 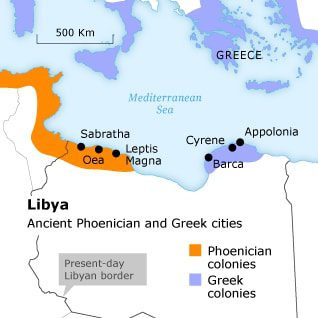 The Garamantes formed a substantial nation in Fezzan between 900 BCE and 500 CE. They are believed to have had writing, horses, and wheeled vehicles. The Greek historian Herodotus wrote in the 5th century BCE that people in Fezzan used wagons with four horses to hunt ‘troglodyte Ethiopians’, probably referring to the Toubou in the Tibesti Mountains.

The Garamantes dominated the caravan routes through the desert to Egypt and sub-Saharan Africa. Salt, traded for gold and slaves, was used to preserve meat and food. Herodotus described the Garamantes’ agricultural practices: spreading salt on the earth to germinate seeds and relying on hundreds of underground aqueducts, foggaras , in the oases for a flourishing agriculture. The Garamantes probably collapsed when the underground water supply was exhausted.

The Imazighen/Berbers adopted much of the Phoenician culture and language, which, like related Semitic languages, was written from right to left. It was long thought that the Phoenician language was replaced by the Latin language of the Roman conquerors in two centuries, after the destruction of Carthage, but recent research indicates that the regional elite used the language much longer. This included church father Augustine (354-430 CE) and the Roman emperor Septimius Severus (reigned 193 to 211 CE).