Egypt has a rich history spanning thousands of years. As a result, it has a wide range of monuments spanning four different periods: Pharaonic, Greek, Coptic and Islamic. These monuments are among the most important in the world, which has led many historians and archeologists to specialize in Egyptology. The field received a major boost following the 1799 discovery of the Rosetta Stone, a stone dating from 196 BCE inscribed with two languages (Egyptian and Greek) using three scripts (hieroglyphic, demotic and Greek).

This article describes some of Egypt’s most famous and significant archeological sites and monuments.

Archeology from the Pharaonic Era

The pyramids are the greatest example of ancient Egyptian engineering. Visitors to Egypt often focus only on the three famous pyramids on the Giza Plateau, outside Cairo. The Pyramid of Khufu, which was built around 2560 BCE and is the largest of the three, is distinguished by its meticulous design and the beauty of its proportions. The pyramid’s original height of 146 metres has been reduced to just under 139 metres due to erosion. However, it is the oldest of the Seven Wonders of the Ancient World and the only one to remain largely intact.

Next in size is the Pyramid of Khafra, named after the fourth king of the Fourth Dynasty (2520-2494 BCE) and the son of King Khufu. The original height of the pyramid was 143 metres, but it is now less than 136 metres high. The original casing can still be seen at the top of the pyramid.

Located in the south of the plateau, the Pyramid of Menkaure, named after the son of King Khafra, is the smallest of the Giza pyramids. At 66.5 metres high when it was built (it is now 62 metres), the pyramid is less than half the height of the pyramids dedicated to Menkaure’s father and grandfather.

No scholar can write about the pyramids, especially the Pyramid of Khafra, without referring to the Sphinx, a reclining limestone statue with the body of a lion and the head of a human. The two elements of the statue have been combined so harmoniously that it is easy to forget that this is a mythical creature. The Sphinx is located on the eastern edge of the Giza Plateau and was carved from the bedrock. It measures 73 metres from paw to tail and around 22 metres high from the base to the top of the head.

Ain Shams Obelisk is the major surviving remnant of the ancient city of Heliopolis, to the north-east of Cairo, which was notable as the cult centre of the sun god. The ancient Egyptians called it Lunu (‘city of the sun’), which the Arabs later changed to Ain Shams (‘eye of the sun’). The area was once full of obelisks and other structures, which were scavenged for construction elsewhere or taken out of the country. Ain Shams Obelisk, which was erected by Senruset I of the Twelfth Dynasty, still stands in the same place where it was built some 4,000 years ago.

Luxor Temple is located on the eastern bank of the River Nile near the city of Luxor (ancient Thebes). To the rear of the temple are chapels built by Amenhotep III of the Eighteenth Dynasty. Other parts of the temple were built by Ramses II. As in many other temples, the existing buildings were built on the foundations of older buildings.

Three kilometres from Luxor Temple lies the massive complex of Karnak. It features a mix of architectural styles. However, its importance lies as much in its history – which spans almost 2,000 years – as its architecture. Construction began during the Middle Kingdom and continued into the Ptolemaic era, although most of the existing buildings date from the New Kingdom. The complex was the main place of worship of the gods Amun-Ra, his wife Amunet and their son Khonsu, also known as the Theban Triad. The Great Temple of Amun, which is the heart of complex, is the largest in the world.

The Abu Simbel temples are two rock temples in southern Egypt. Carved out of the mountainside in the 13th century BCE, during the reign of Ramses II, the temples are architectural marvels. They are constructed in such a way that the sun lights up the face of the most sacred statue twice a year: on Ramses’ birthday and coronation day.

In 1968, the temples were relocated in their entirety to an artificial hill. The relocation was necessary to avoid the temples being submerged during the creation of Laker Nasser, the reservoir formed following the construction of the Aswan High Dam on the River Nile.

Archeology from the Ptolemaic Era

The Ptolemaic era is named after Ptolemy, one of the seven bodyguards who served as Alexander the Great’s generals and deputies. Ptolemy was appointed governor of Egypt after Alexander’s death in 323 BCE; in 305 BCE, he declared himself king. The Ptolemaic Dynasty ruled for nearly 300 years.

The Lighthouse of Alexandria is located in the south-eastern part of the island of Pharos, off the coast of Alexandria. Construction began during the reign of Ptolemy I and was finished in 279 BCE under Ptolemy II.

Pompey’s Pillar is a triumphal column located in the ruins of the Serapeum temple in Alexandria. At almost 27 metres high and with a diameter of 2.70 metres at its base, the column is one of the largest columns of its kind ever erected.

Archeology from the Coptic Era

In the 2nd century AD, Christianity spread in Egypt. From the 5th century until the Muslim conquest, various churches were built in the Nile Valley.

Tree and Spring of the Virgin

Located in the al-Matareya suburb of Cairo, the Tree and Spring of the Virgin are considered to be the most important Christian shrines in Egypt. According to local belief, the Virgin Mary and Jesus Christ stopped in al-Matareya, then a village, during the flight to Egypt. Mary rested against a sycamore tree and water sprang up for her to bathe Jesus. Although there is no evidence to support this belief – the spring predates Jesus and the tree was not planted until the end of the 17th century – the location has been a place of pilgrimage for Coptic Christians for centuries.

Dating back to the 4th century, the Virgin Mary’s Coptic Orthodox Church in Cairo is one of the oldest churches in Egypt. Its alternative name, the Hanging Church, comes from its location above a gatehouse of Babylon Fortress. The church is reached via 29 steps and its nave is suspended over a passageway.

Also dating back to the 4th century, this church in Cairo was built above a cave where the Holy Family is believed to have lived while Joseph worked at the fortress. The church, which is an early example of Byzantine architecture, is named after two martyred Roman Christian soldiers.

This monastery in Cairo contains three churches, the largest of which is the Church of Saint Shenouda, which dates back to the 5th century. The second is the Abu Seifein Church and the third is Saint Mary Damshiria Church, which takes its name from the village of Damshir.

Located in the Kom al-Dekka area of Alexandria, the Roman Amphitheatre dates back to the 2nd century. It was restored in the 4th century.

The Black Head Temple was discovered in 1936 in the al-Raas al-Sawda (‘black head’) area to the northeast of Alexandria. The temple was built between the 2nd and 3rd centuries. Among its most striking features is a statue of an exposed foot on a short marble pillar that bears an inscription in Greek. The Roman knight Aazodorus had fallen and broken his foot. When he recovered, he built this temple to honour the goddess Isis.

Located at the foot of Mount Sinai on the Sinai Peninsula, Saint Catherine’s Monastery resembles a medieval fortress. Built between 548 and 565, the monastery is one of the oldest working Christian monasteries in the world. It also contains the world’s oldest continually operating library.

Archeology from the Islamic Era

The Mosque of Amr ibn al-As is the earliest Islamic building in Egypt and the oldest mosque in Africa. It was built in 641 by Amr ibn al-As in al-Fustat, a city that grew out of an Arab army encampment on the site of present-day Cairo.

A majestic red brick complex, the Ibn Tulun Mosque was built on Mount Yashkur in Cairo by the founder of the Tulunid Dynasty (868-905).

The Saladin Citadel of Cairo

The citadel is a medieval Islamic fortification on the Mokattam Hills in Cairo. It was fortified by the Ayyubid ruler Salah al-Din (Saladin) between 1176 and 1183 to protect it from the Crusaders.

Gates in the walls of the Old City of Cairo

These gates are an example of Fatimid military architecture. Jawhar al-Siqilli, the Sicilian-born commander who built Cairo, ordered the construction of the gates in 968. Bab al-Nasr and Bab al-Futuh are located in the north of Cairo. Bab Zuwaila is located in the south.

The Egyptian Museum in Cairo contains one of the world’s most important collections of ancient Egyptian antiquities. Unlike many museums in Egypt, which are housed in former palaces, the neoclassical building was designed by the French architect Marcel Dourgnon in 1897 to function specifically as a museum.

Below are the publications by acclaimed journalists and academics concerning the archaeology in Egypt section of this country file: 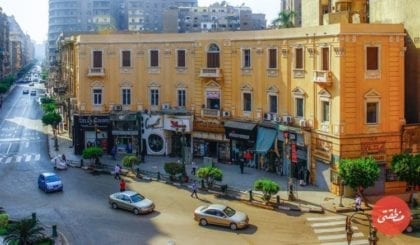 The Paradox at the Heart of Cairo’s City Centre Revival

In short, the government and private parties such as Al Ismaelia for Real Estate …