Arab-Muslim forces from the Arabian Peninsula, led by Amr Ibn al-As, defeated the Byzantine army in 636 CE, during the reign of Umar Ibn al-Khattab, the second caliph (literally, ‘successor’) after the death of the Prophet Muhammad. Commander Amr Ibn al-As conquered Egypt city by city and built his capital Fustat, north of what is now known as Old Cairo. Egypt became a province in the vast Islamic empire that was ruled by Damascus and later Bagdad. As in Roman times, Egypt’s main role was as a producer of food. During the following centuries, Egypt was gradually Arabized and Islamized.

The Fatimid caliphs ruled an empire that included North Africa, Sicily, Syria, and the western part of the Arabian Peninsula – in fact, half of the Muslim world at its peak. As Egypt was at the center, the caliph built a new capital in 969 CE, the city of al-Qahira, Cairo, the Conqueror. The city featured palaces and the mosque-university of al-Azhar, the oldest Islamic school of learning still in existence.

The Fatimids’ friendly relations with the Byzantine Empire during its campaign against Latin Christians and the destruction of the Church of the Holy Sepulchre in Jerusalem supposedly provided the pretext for the crusades, although, in reality, Christian expansionist politics were in sway. Egypt became a target of the Crusaders in 1167, but Salah al-Din ibn Ayyub (1138-1193), also known as Saladin, put a stop to this.

Saladin became ruler of Egypt after the death of the last Fatimid caliph in 1171. He declared himself sultan (literally, ‘authority’), a secular title, rather than caliph. Known for his personal modesty, generosity, culture, political capability, and, not least, his success in repelling the Crusaders, Saladin later became a legend in Arab history. After Saladin’s death, his successors in the Ayyubid dynasty kept Egypt a union, in contrast to the eastern territories. The Ayyubids became increasingly dependent on an army of Turkish-speaking slaves from the Black Sea region. One of those slave-soldiers, Baibars, also known as the Crossbowman, eventually seized power and introduced the era of the Mamluks.

Mamluk emirs (military leaders) controlled Egypt for three centuries characterized by intrigue, infighting, and assassinations. Egypt again came under threat from a foreign invasion when the Ottomans to the north consolidated their power by defeating the Shiite Persians and conquered Mamluk territory in Syria. The last Mamluk sultan, Tuman Bay, was executed in Cairo by the Ottomans in 1517.

An ensuing power struggle within Egypt was won by Muhammad Ali (1769-1849), an Albanian officer in the Albanian Corps of the Ottoman army. The Ottoman sultan acknowledged him as pasha in 1805, as he proceeded to rid Egypt of remnants of the Mamluk power structure. Muhammad Ali is regarded as the founder of modern Egypt.

Though officially a vassal of the Ottoman sultan, he administered Egypt independently, confiscating private lands, introducing modern technology from Europe, building railways and factories, and digging canals. Muhammad Ali was also the first in centuries to build an army consisting of Egyptians, instead of depending only on Mamluks. Ali’s expansion and ambition to control parts of Syria put him in direct confrontation with the British and the Ottoman Empire.

Towards the end of his life Muhammad Ali was forced to sign a treaty confining his power to Egypt. He died in 1849.

His grandson, Said Pasha (1822-1863), granted a concession to French engineer Ferdinand de Lesseps to dig the Suez Canal (Port Said, at the northern end of the canal, is named after him). By the time it was completed in 1869, Egypt was drowning in its debts to European lenders. To stave off bankruptcy Khedive Ismail (1830-1895), leader of Egypt at the time, was forced to sell his Suez Canal shares to the British government.

The Digging of the Suez Canal 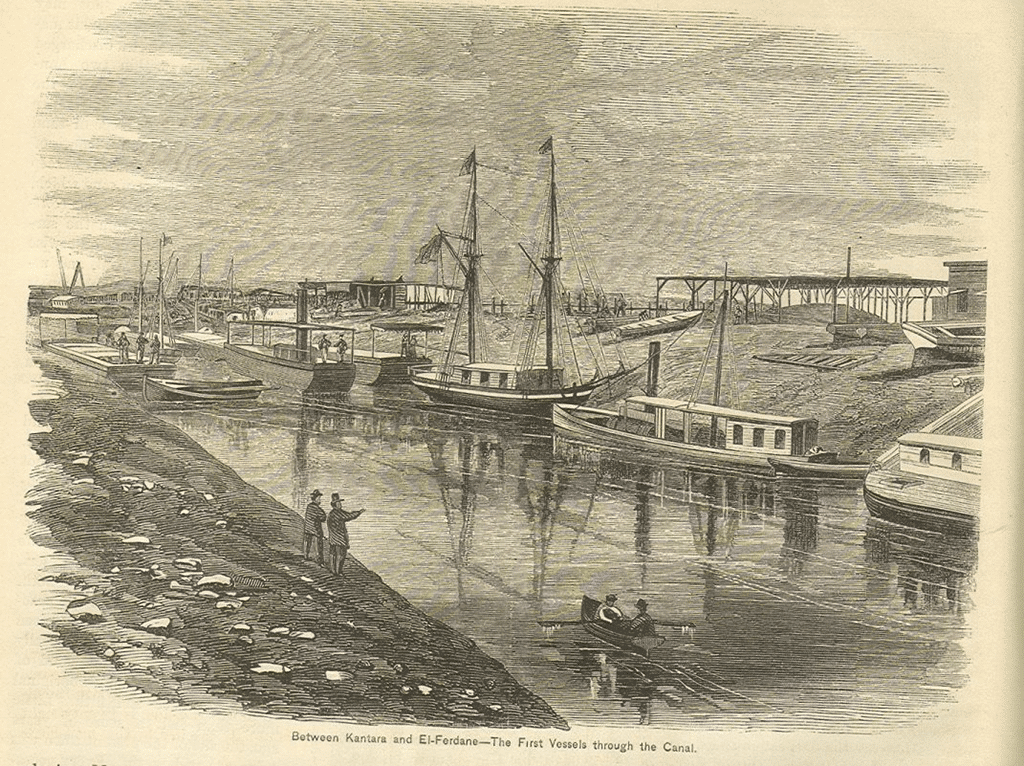 Suez Canal, 1869It took ten years to dig the almost 193 kilometers long Suez Canal (1858-1868). During the whole project, a total of 1.5 million laborers were involved. At any given moment 30,000 men were at work, many of whom died as a result of accidents and diseases.