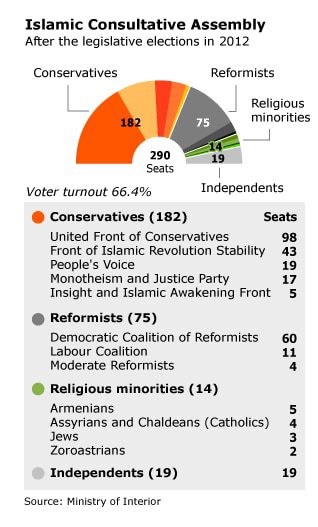 The parliamentary elections for the Ninth Islamic Consultative Assembly (or Majlis), were held in Iran on 2 March 2012, with a second round on 4 May 2012 in those 65 districts where no candidate received at least 25 percent of the votes cast.
More than 5,000 candidates registered, but more than a third of those were disqualified by the Guardian Council, leaving about 3,400 candidates to run for the 290 seats representing the 31 provinces.

In the elections, pro-Khamenei supporters won a large majority of seats over pro-Ahmadinejad candidates. Although the Parliament has no direct control over key foreign-policy and security matters, it does have some influence over those policies and coming elections. In the wake of the crushing of the reformist protests against the 2009 election results, the Guardian Council allowed few if any reformist candidates to run. The new Parliament was opened on 27 May 2012.