Jordan’s spending on education is increasing, to nearly 11.5 per cent ($1.3 billion) of the state budget of $11.3 billion for 2015, according to Ministry of Finance figures. The rise in spending is aimed at reforming the education sector, which is a top priority for the king, the government, and for observers outside the government. In 2015, there are 4,935 schools across the kingdom, with 1.6 million students. The number of teachers is estimated by the Ministry of Education at 85,000, making the ratio of students to teachers 19 to 1.According to Walid al-Jallad, spokesperson of the ministry, the increase in spending on education is intended to improve the enrolment rate of primary-education students, currently stand at 98 per cent, and to take the pressure off public schools caused by offering free education to tens of thousands of Syrians, who, with their families, have fled their war-torn country for Jordan.

“We have been building more schools every year across the country,” he said, adding that the ministry’s strategy for the medium term is to improve the quality of education and Jordan’s ranking in international reports. According to the Phenix Center for Economics and Informatics Studies, Jordan has participated in several international ranking tests to evaluate students in science and mathematics, and the results of students fell below anticipated levels.

Jallad said there are plans to boost education, which include enhancing the capabilities of teachers and improving the curricula and the General Secondary Education Examination, known as Tawjihi, which students have to pass before being admitted to universities. Teachers will also be trained on best educational practices in order to improve their skills and, ultimately, the performance of students. Teachers will be appointed on the basis of competitiveness and efficiency, he said, adding that the ministry also aims to build 450 schools in the next five years, in order to accommodate the increasing number of students. There are only 38,000 students enrolled in vocational training schools, so promoting vocational education is also a priority.

In August of this year, King Abdullah met with stakeholders in the education sector to discuss plans and strategies. At the meeting, attended by top government officials, the king stressed the importance of making the utmost effort to address all elements of the educational process, including curricula, students, and educators, which, it is hoped, would be reflected positively in the outcome of the entire process and would qualify students to meet the needs of the job market.

Ziad al-Abdullah, a member of the Jordan Teachers Association, said the government has, over the past two years, succeeded in recovering the reputation of, and public trust in, the Tawjihi exams, not only by adopting strict measures against cheating but also by taking a new approach in the questions, focusing on critical thinking, rather than memorization.

Jordan still enjoys a regional reputation in education, but strategies should be adopted to improve its image and educational outcomes. A study on education, a copy of which was made available to Fanack, was conducted this year by former prime minister and renowned academic Adnan Badran. Badran says that private education in Jordan has opened the educational sector to competition in teaching, curricula, learning aids, facilities, schooling activities, and fostering an environment for nurturing learning.

In Jordan, schooling is the main incubator of creativity, innovation, and excellence in entrepreneurship in quality and relevance, in order to build the needed human capital for the knowledge economy, Badran says, adding that reform is underway in Jordan in general education, from kindergarten to Tawjihi.

In Jordan, there are 32 public and private universities enrolling about 450,000 bachelor’s students and 35,000 postgraduate students, according to the Higher Education Ministry. The Kingdom is also home to 55 community colleges, with 42,000 students enrolled. Government spending on higher education for 2015 is estimated at $146 million, according to the Finance Ministry.

A major challenge for Jordan is the large number of university graduates every year, estimated at more than 60,000, for whom it is difficult to create enough jobs. Badran says that the marketplace for higher-education graduates is not limited to Jordan, and graduates in larger numbers now compete in the regional markets. Remittances from Jordanian university graduates working abroad exceed $3 billion a year. Officials estimate the number of Jordanian expatriates, mainly in the oil-rich Gulf region, at 750,000.

As the Middle East in 2015 is increasingly suffering from terror and radicalization, activists and experts are worried that Jordan’s curricula somehow promotes extremism and have called on the Education Ministry to update curricula to be align with the moderate and modern image of the Kingdom. A ministry official rejects such claims and says authorities are in the process of updating textbooks.

Professor Thouqan Obeidat pointed out, in an analytical study he prepared in Arabic (July 2015), some of the teachings still in the curricula that, he said, contradict Jordan’s values of tolerance and the plans of the ministry itself that aim to promote coexistence and fight radicalization. Obeidat, who served as director of curricula at the ministry in the 1990s, told Fanack in October 2015 that the ministry, in the latest curriculum update (late August), updated the cover of the report but not the content.

He said that, although the vast majority of Jordan’s population is Muslim, curricula should not exclude other components of the society, including Christians, labelling some of the material as extremist in its references to the terrorist group Islamic State in Iraq and Syria, saying, for example, that “Muslims should be tolerant among each other and should not cause harm to each other.”

Content dominated by Islamic teachings, he said can be found in several books, not only in books on Islam. In the national education textbook for the fifth grade, Obeidat said that the author attacks modern science and philosophy by describing them as distracting Muslims from the practice of their faith. “Modern science has several benefits in our lives, especially in agriculture, but it has distracted people with unrest and destroyed civilizations by promoting secularism and capitalism.”

Obeidat said that, in the Arabic-language textbook, photos and paintings of women always show them with their heads covered, even when they were sitting with family, adding that, in the textbook on Islam, the author says that women are not allowed to leave their homes unless they obtain the permission of the husband or other man in authority in the home. “The school curricula are written by people who follow the approach of the Muslim Brotherhood,” he charged, adding that, because the region has become an incubator of radicalization, authorities should work on updating textbooks to promote coexistence with all mankind, regardless of religion. The current curricula say that Muslims should be tolerant towards one another. What about tolerance for people of other faiths?,” Obeidat wonders.

Activist Dalal Salameh, also a former official in the Education Ministry, has also criticized the types of courses being taught at schools, saying that Islam is taught not only in the textbook on Islamic religion but also in other textbooks, such as Arabic language.

Students in the primary grades are taught that Muslims should not harm each other, Salameh said, warning that current curricula restrict real humanitarian values to Muslims, excluding others. Salameh, who is also a columnist, indicated that, although there is no explicit hate speech in the curricula, hate can be sensed in the content of the curriculum. However, she said that a complete or sudden change in the curricula would be challenged by many in Jordan, noting that the best way to update textbooks with content on tolerance and acceptance of other people would be to begin a national dialogue that allows people to say what they believe.

Former prime minister Marwan Muasher also talked about the issue, which has recently become a heated debate in other countries, such as Egypt, as well as in Jordan. In an article published on 26 August 2015, in the Arabic daily al-Ghad, Muasher charged authorities with being reluctant to confront the ideology of exclusionism that controls the education system, adding that such an ideology is a threat to pluralism in the Kingdom and can jeopardize creative thinking and the acceptance of others.

Muasher said that the art content of the curricula is limited, not exceeding one per cent, adding that art can inspire students to be more creative and innovative. Muasher praised people who have the courage to criticize the present curricula, which, he said, promote exclusionism and extremism, describing activists in the field as seeking to rescue Jordanian society from darkness and destruction.

But Wafa Abdallat, director of the curriculum department at the Education Ministry, denied charges that the content of textbooks promotes radicalization, saying that Jordanian curricula call for tolerance, respect for other cultures and religions, and gender equality. Abdallat said that the ministry is updating secondary-level textbooks and would cancel the topic of national education topic to be replaced by a textbook on Jordan’s modern history. She said that the ministry is open to all suggestions and constructive ideas that can contribute to curriculum development.

Below are the latest articles by acclaimed journalists and academics concerning the topic ‘Education’ and ‘Jordan’. These articles are posted in this country file or elsewhere on our website: 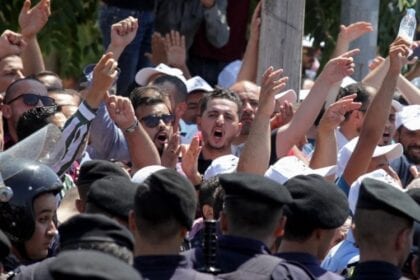 Amid the revolutionary fervour sweeping the Arab world, Jordan has gone largely unnoticed. … 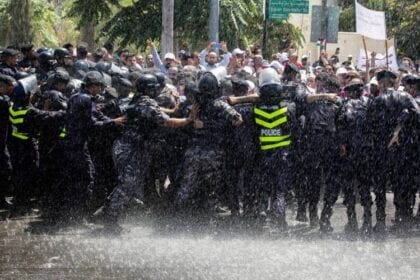 The protest was met with a harsh police response. According to reports, tear gas was used … 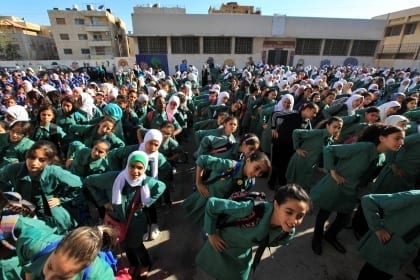 Jordan still enjoys a regional reputation in education, but strategies should be adopted …