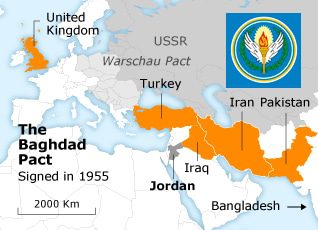 In the first half of his reign, King Hussein’s position was frequently under threat. The 1950s and 1960s were the heyday of a radical anti-Western Arab nationalism that demanded the liberation of Palestine, pan-Arab unity and socialism at home, and non-alignment abroad. Jordan – with its restless majority Palestinian population, the longest Arab border with a truculent Israel, and surrounded to the north and east by far more powerful radical Arab states – was at the heart of the turbulence. As the head of a regime that many accused of having betrayed the Palestinians in 1948 and that relied on the United Kingdom and the United States (the two countries that, after Israel, were the most detested by the radicals), Hussein was an obvious target.

Key foci of opposition in the 1950s were the Baghdad Pact and the continuing British military presence in Jordan. Conceived as a bulwark against Soviet expansion into the Middle East, the Baghdad Pact was a military alliance signed by Iraq, Turkey, Iran, Pakistan, and Britain in 1955. Jordan came under intense British pressure to join. King Hussein favoured the move, but in December 1955 the country was swept by five days of anti-Hashemite demonstrations and riots that were quelled only by the intervention of the Arab Legion and the imposition of a curfew. Hussein backed away from the Baghdad Pact, dissolved Parliament, and called a general election. In January 1956, however, his dissolution of Parliament was ruled invalid by the courts. Further rioting erupted, to be quashed once more by the army.

In a bid to appease his opponents, in March 1956 the king fired Sir John Bagot Glubb (Glubb Pasha), the British officer who had been second in command of the Arab Legion since 1930 and its commander since 1939. The Arab Legion was renamed the Jordan Arab Army.