After the French occupation of Syria, nationalists had fled south to Amman, which they had been calling on Sharif Husayn’s second son, Abdullah, to lead a campaign to recover Syria. In November 1920 he responded by travelling with a force of armed tribesmen to the small oasis town of Maan, today in southern Jordan but then in the kingdom of Hejaz. Abdullah remained in Maan for three months awaiting the British reaction. The British, whose presence in Transjordan was only nominal, were worried that Abdullah might complicate Britain’s relations with France.

By early 1921, however, London had decided that Transjordan should be included formally in its Palestine mandate; that, as a gesture to their wartime promises to the Arabs, the territory should be exempted from the mandate’s provisions concerning a Jewish National Home; and that Abdullah should abandon his declared designs on Syria and instead head a British-sponsored Transjordanian administration.

In March 1921 Abdullah moved north to Amman. That month a conference of British officials in Cairo resolved that Abdullah should govern Transjordan under the British high commissioner in Palestine. In late March, Winston Churchill, the Colonial Secretary, accompanied by Lawrence, travelled to Jerusalem, where he signed a formal agreement with Abdullah.

In 1921 Transjordan’s population was only about 230,000. It had no significant natural resources and few settlements, and its only real revenue was a British subsidy. Transjordan was ‘a country – if it was a country at all… which was conceded to Abdullah because nobody else really cared to have it’, wrote Lebanese historian Kamal Salibi. Abdullah was utterly dependent on the British, especially for cash and military support. Although he cultivated, and generally enjoyed the allegiance of, the tribes, the ultimate guarantor of his rule was his army, the British-officered Arab Legion, formed in 1923 (from 1939 to 1956 led by Sir John Bagot Glubb, better known as Glubb Pasha).

At that time Ibn Saud and his Wahhabi fighters were expanding their power in what would become Saudi Arabia, a process that would bring about the demise of the Sharif Husayn’s Kingdom of the Hejaz. In an effort to salvage at least a part of his family’s domains, Abdullah, backed by the British, in 1925 announced the incorporation of Maan and Aqaba districts into Transjordan. 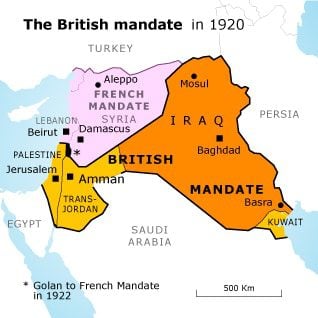 In 1923 London recognized the existence in Transjordan of a government under Abdullah and acknowledged him as emir but said nothing about the status of his domain. An Anglo-Transjordanian Agreement of 20 February 1928 went a step further, recognizing the territory as an ’emirate’, or principality. Transjordan’s formal independence from the UK was agreed in a treaty signed on 22 March 1946 that also provided for ‘perpetual peace and friendship’ between the two, while providing for continued British support for the Arab Legion and access to military facilities. On 15 May 1946 Abdullah’s compliant government resolved that his title should be upgraded from ‘Emir’ to ‘King’, and this was endorsed by his equally compliant Parliament on 22 May 1946. In the same session, Parliament voted to change the country’s name to the Hashemite Kingdom of Jordan.