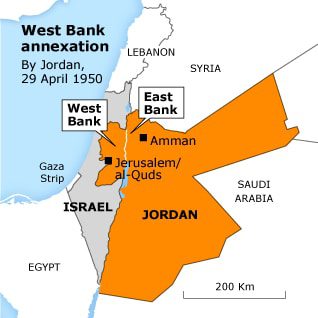 On 1 December 1949 some three thousand delegates attended a Palestinian Congress in Jericho, just north of the Dead Sea, and passed a resolution calling for the unification of Jordan and Palestine under Abdullah. Within days, the resolution was ratified by Abdullah’s government and parliament in Amman. On 11 April 1950 general elections were held embracing both banks of the Jordan. On 24 April a joint session of the upper and lower houses of parliament adopted a resolution declaring support for ‘complete unity between the two sides of the Jordan and their union into one state, which is the Hashemite Kingdom of Jordan, at whose head reigns King Abdullah I, ibn al-Husayn (son of the Sharif of Mecca)’. On 29 April 1950 the West Bank was formally annexed.

Although the Arab Legion’s creditable performance had enabled him to pose as a champion of the Palestinians, Palestinian self-determination had not been Abdullah’s objective. Many, perhaps most, Palestinians saw him as a traitor. On 20 July 1950, while entering the Aqsa Mosque in Jerusalem for Friday prayers, King Abdullah was shot dead by a young Palestinian. The full circumstances of the assassination have never been established, but it is was widely believed to have been in revenge for Abdullah’s collusion with the Zionists.

As a stopgap, Abdullah’s son, Naif, was appointed regent. On 6 September 1951 Naif’s elder half-brother, Talal, who had returned from Switzerland where he had been receiving treatment for schizophrenia, was crowned King. In August 1952 his worsening illness forced him to abdicate in favour of his son Hussein, who ascended to the throne, aged just eighteen, on 2 May 1953.