The coastal region of present-day Lebanon corresponds to an important part of ancient Canaan, which extended from Ugarit (now Ras Shamra) in northern Syria, along the coast and the valley of the river Orontes, down to southern Israel. Later, in the 1st millennium BCE, Tripoli, Byblos, Beryt (Beirut), Sidon (Saida), and Tyre were famous, independent Phoenician cities.

Phoenician fleets sailed out to North Africa, where they established colonies, often resembling trade factories. Their most important colony was Carthage (Carthago, meaning New City), near present Tunis (Tunisia). They even explored the Indian and Atlantic Oceans and the African coasts, starting from the Red Sea, sailing south around the Cape, and from there, back to Carthage, following the African coastline. On other occasions, the Phoenicians reached West European shores and traveled as far as Normandy (in France). 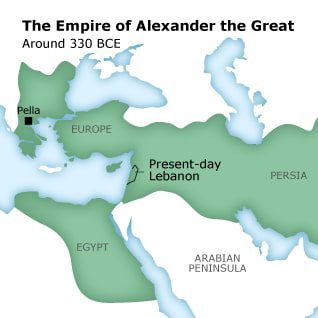 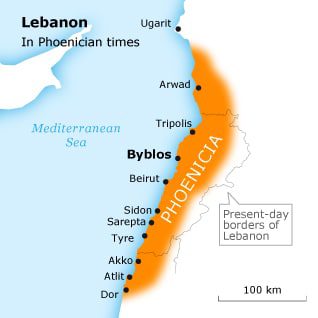 Phoenicia was part, successively, of the Assyrian, Babylonian, and Persian Empire until 333-332 BCE. But its cities retained their independence, each ruled by its own king. The Persians especially, allowed the Phoenicians to conduct their own business and did not try to impose their Persian culture.

The Phoenician cities each had their own army – although they supported one another when necessary. However, even their combined forces could not resist those of Alexander the Great from Macedonia.

Tyre (Sur), which was built both on the mainland and on an island, offered the greatest resistance and was the last of the Phoenician cities in the Levant to fall, in 332 BCE, after a siege that lasted for seven months. Afterward, the only Phoenician city to remain out of Greek hands was Carthage. It would remain independent until 146 BCE when it was finally taken by the Romans.

Alexander the Great’s conquest of the Phoenician cities in the 4th century BCE meant that the Levant came under Hellenistic rule. Alexander went on to conquer Egypt and the Persian Empire, but he died within a decade of his conquests. After his death (323 BCE), his empire was divided among his three generals. Antigonos was given Greece, Egypt went to Ptolemy, and Seleukos (or Seleucus) received the eastern part of the empire, from Asia Minor to the eastern border, more or less coinciding with present-day Iran’s border with 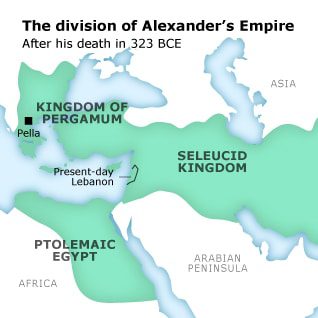 In Lebanon, philosophy flourished under the influence of the Greeks. Diodoros of Tyre, a member of the Peripatetic school, is a well-known philosopher. The Greeks were tolerant towards other religions; many of the gods worshipped in different religions were considered identical to the Greek gods, only with different names.

Baal was the word for ‘Lord’ in the Aramaic-Syriac language spoken in the region. El was considered the equivalent of Ra in Egypt, and of the Greek god Zeus and the Roman Jupiter. Melkart, the Baal associated with Tyre, was viewed by the Greeks as an avatar of Heracles.

In 64 BCE, the Greek rulers in Lebanon and surrounding countries were supplanted by the Romans, who would stay there until 636 CE. After their conquest of Carthage, the Romans extended their empire to the southern shores of the Mediterranean, which eventually became ‘a Roman lake’ in the words of the late Lebanese historian Boutros Dib. In many respects, Roman civilization was just a continuation of Greek culture. But where politics, law, and administration were concerned, the transition from one empire to another did entail a break.

Where the Greeks insisted on local democracy and the independence of cities, the Romans endeavored to install a centralized administration – in Rome. Moreover, many Roman emperors leaned towards dictatorship. They even inclined towards deification – which was strongly resisted by the Christians in their empire. Still, the emperor’s power was not unlimited.

Another change for the newly conquered peoples was the introduction of Roman law, which was written in Latin, a language most people did not master. In the eastern region of the Roman Empire, the cultured language was Greek, and the vernacular language – at least around Mount Lebanon – Aramaic-Syriac. Whereas local customs and traditional law had essentially been respected under Persian and later Hellenistic rule, now the law of the land was Roman, and the institutions were imposed by Rome.

The kings who had ruled the cities along the Lebanese coast since Phoenician times were replaced by governors – often chosen from the same families – and citizens were ‘classified’ in a hierarchical system. In later centuries, the differences between the social classes tended to diminish. In the third century, Emperor Caracalla (211-217) awarded Roman citizenship to all inhabitants in the provinces, including the peripheral provinces or colonies.

Periods of prosperity and peace alternated with periods of anarchy and (civil) war. The empire was regularly attacked by the Parthians and Sassanid (Persians) on its south-eastern flank and by Germanic-speaking bands of warriors (Goths) and Vandals in the north and north-east. In addition to these attacks, the Roman Empire was at times weakened by internal power struggles.

From the first century CE on, the Christian religion spread along the Mediterranean Coast and beyond. Lebanon and Syria were among the very first countries to be Christianized. The Christians in the Roman Empire were at first ignored or tolerated, then persecuted, and eventually recognized. The persecutions were at their height during the reign of Diocletian (284-305). His successor, Constantine (305-337) converted to Christianity. With him came a new, more stable era.

Under his predecessor, the Roman Empire had been divided into a western and an eastern empire. Constantine, head of the eastern empire which was by far the more powerful and economically successful, moved its capital eastwards to Byzantium (Constantinople), which allowed him to be closer to its enemy, the Sassanid (Persians). Constantine thus laid the foundations of what would later be called the Byzantine Empire, which was consolidated by Justinian I (527-565).

He temporarily reunited the two empires and subdued the Goths and Vandals in the provinces of Italy, Spain, and North Africa. On the eastern frontier, he waged war against the Persians – eventually with success, although only after an extended and costly campaign to force them to withdraw from (the north of) Syria.

Justinian I, who fought corruption in all governing bodies, also codified the Roman laws and jurisprudence. He greatly stimulated law studies (Beirut had a famous law school) and among his main legacy is the Corpus Juris Civilis, published in 529, containing all the laws promulgated in the Roman Empire since Hadrian (117-138).

The later laws were collected in another volume, Novellae Constitutiones Post Codicem. Another compilation, the Digesta (533), contained the jurisprudence. Many of the texts compiled in this work were written by the Lebanese jurist Ulpian from Tyre, who lived in the 3rd century. In 533, a handbook for law students (Institutes) was also produced.