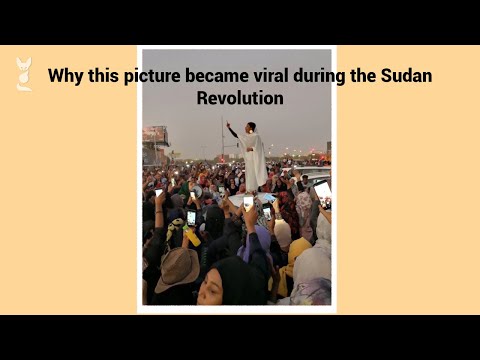 Small groups of young men and women are moving close to and far from each other with fear and caution, amid fabricated talk designed to distract attention. They are scattered in the roads leading to the main streets in the Sudanese capital Khartoum to deliver the messages of their movement, which appear to those who do not know them to have no purpose. At 1pm local time, a loud zaghroudah (long trilling of joy) came from an unknown girl in a corner, followed by another zaghroudah to mark the launch of the demonstration.

For 106 days, demonstrations against President Omar al-Bashir that started in December 2018 had a distinct feminist impetus. Women did not confine themselves to making zaghroudah, which in Sudanese culture is a symbol of masculinity and magnanimity. They were leaders and pioneers in protests the size of which has not been seen in any other Arab Spring uprising.

The Western correspondents who flocked to Khartoum during the protests noted the phenomenon. Olivia Macadre, a journalist for the French-language Mediapart website, reported that the international press was stunned by the extent of women’s participation but noted that ‘this was neither strange nor new to women in this country’.

Women filled the squares where thousands of people had been protesting since 6 April in front of the army headquarters, Macadre wrote. According to the reporter, these women were doing a lot of work, including helping to run a makeshift clinic to treat sick and injured people.

After 30 years of totalitarian rule, the Sudanese revolution has been undisputedly a women’s revolution. It has also served to debunk the stereotype that Sudanese women are voiceless, powerless and deprived of their freedom, refuting a popular saying that a ‘woman is a hatchet that does not break the head’, meaning that no matter how powerful women are, they will have no impact.

Women have emerged as the symbol of the popular protest movement that eventually toppled al-Bashir on 11 April. They inspired young people after facing live ammunition and tear gas, verbal and physical violence, arrest and harassment in prison in a concerted effort to discourage women from joining the protest marches.

Although al-Bashir’s brutal regime affected all Sudanese people, overt, covert and symbolic repression of women was a prominent feature of his Islamization and Arabization policies. He asserted repeatedly that Sudan has refused to sign the United Nations Convention on the Elimination of all Forms of Discrimination Against Women on the grounds that it constitutes a violation of Islam. Meanwhile, wealthy Islamist allies of the regime, as well as al-Bashir himself and his senior aides, have traditionally practiced polygamy. polygamy was almost extinct among the educated classes before al-Bashir came to power and was considered reprehensible even among the original Muslim Brotherhood group and its historical leaders.

For three decades, the regime tried to enforce coercive nominal laws by imposing restrictions on women and limiting their movement and freedom. These practices fell under the notorious Public Order Law, which condones the whipping and imprisonment of women for wearing trousers, not covering their hair with a scarf or making or selling alcohol.

The humiliating punishments for these alleged transgressions generated profound outrage among women, especially the educated middle-class living in cities. They played a leading role in the revolution from the very beginning and encouraged other women who had never shown an interest in politics to take to the streets.

According to activist Marafi Sati, “Sudanese women are among those who were most harmed by the practices of al-Bashir’s regime. This is why they led the ranks of the revolution, hoping for change. Not only did they want to change the ruling regime, but they also sought to change [men’s] perception that has for a long time looked at women as a second-class object.”

Sati said she was confident that the next change would be in the interest of women, adding, “We do not feel that we will be frustrated in the future, because our confidence is not in the revolution but in ourselves first, and in the level of awareness that Sudanese women have.”

A number of women have emerged as international symbols of the revolution, including an activist known as the ‘hunter of tear gas canisters’. In a video that went viral on social media, Rifqah Abddulrahman can be seen picking up tear gas bombs and throwing them back at the riot police in what has become an iconic act of bravery.

In an interview with a local television station, Abddulrahman said that her insistence in participating in the revolution was a desire to bring about change that goes back to the September 2013 uprising, in which almost 200 people were killed, according to government statistics. She learned to ‘hunt’ for the tear gas canisters during her participation in previous demonstrations, she said, which has seen her arrested five times.

Alaa Salah, a 22-year-old student, also became a symbol of women’s rights after she climbed on the roof of a car and chanted “revolution”, a chant that was repeated by thousands of people who participated in the protests. Dressed in a traditional white robe and gold earrings, Salah recalled the outfit that women wore in the 1960s and 1970s when they took to the streets to protest against the previous military dictatorships.

Early on in the protests, Salah inspired women to march toward the sit-in square. Tens of thousands of women wearing white arrived – an amazing scene that resembled a field of white flowers.

This was followed by another march in solidarity with women in detention, in which the participants gathered in front of the women’s prison in Omdurman on 10 February to demand the release of women prisoners.

Sudanese women have also played a prominent role in exposing members of the security forces by releasing photos and video footage showing their brutal treatment of peaceful protesters.

Minbar Chat is a women-only Facebook group with more than 346,000 members interested beauty, fashion, marital problems, love stories and the collection and exchange of information about young people, especially those who manipulate girls. During the revolution, the group quickly transformed into a platform for unmasking the violent behaviour of security officers. The women specialized in identifying security personnel who have killed or used extreme violence against peaceful demonstrators. They found information about these personnel, including addresses and telephone numbers, causing panic among security forces and partially deterring excessive violence.

Despite the revolution’s successes, many Sudanese feel that justice has not been served and that they are being marginalized in the negotiations underway between the forces of the Declaration of Freedom and Change, which are representing the protestors, and the transitional military council. Women leaders in particular, are demanding that women be allocated half the seats in all the transitional authorities.