War loomed over Europe, and this threat induced the British government to revise its policy towards Palestine once more. If Britain had to go to war, Arab hostility in the region towards London could have dangerous effects. In May 1939, the British government issued a White Paper which stated that ‘His Majesty’s Government believe that the framers of the Mandate in which the Balfour Declaration was embodied could not have intended that Palestine should be converted into a Jewish State against the will of the Arab population of the country.

The government, therefore, declared ‘unequivocally that it is not part of their policy that Palestine should become a Jewish State. They would indeed regard it as contrary to their obligations to the Arabs under the Mandate, as well as to the assurances which have been given to the Arab people in the past, that the Arab population of Palestine should be made the subjects of a Jewish State against their will’. Palestine would gain independence by circa 1949 and would include ‘a Jewish Home’. 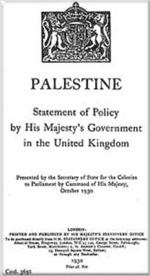 The White Paper put severe restrictions on Jewish immigration in Palestine, which would have to be at a rate ‘which, if economic absorptive capacity permits, will bring the Jewish population on to approximately one-third of the total population in the country (…). This would allow the admission (…) of some 75,000 immigrants over the next four years.’ Thereafter, Jewish immigration would depend on Palestinian consent.

Palestinians and the Zionist movement alike rejected the White Paper. When in September 1939 war was declared in Europe, the leader of the Jewish Agency in Palestine, David Ben-Gurion, stated that ‘we (the Jews) shall fight this war as if there was no White Paper en we shall fight the White Paper as if there was no war.’ But the relative degree of cooperation between the British and the Jews in Palestine had come to an end.