Historical Palestine is part of the so-called Fertile Crescent, the area of fertile lands in the Middle East, where the ancient civilizations of Babylonia, Assyria, Phoenicia and Egypt arose. Greek and Roman civilizations also flourished in this region. Palestine was especially significant as a land bridge between the dominating regions of Mesopotamia and Egypt.

Archaeological research has established that agriculture and inhabited agglomerations in the region date back to about 8000 BCE. Human remains recovered in caves on Mount Carmel prove that the inhabitants belonged to the same group as the Neanderthal of Europe.

In the Early Bronze Age (the third millennium BCE) towns developed in Palestine, first in the northern and central parts and along the coast of the Mediterranean Sea. 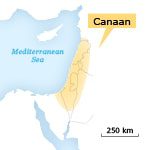 These early town dwellers are usually called Canaanites, and regarded as the original Semitic population of the region. These Palestine towns were probably independent city-states. At the end of the third millennium urbanization came to a halt and a pastoral culture developed under the influence of nomads, supposedly originating from east of the Jordan River.

In the second millennium BCE, a second phase of urban civilization developed, based on agriculture. This civilization had close ties to the towns on the Phoenician-Canaanite coast. Around 1500 BCE, Egyptian armies began to invade Palestine. Under the Egyptian King Thutmose III a stable administration was established in Palestine. The region of Syria-Palestine was divided in three administrative districts under Egyptian governors. The district of Canaan included all the land stretching from the Egyptian border to Byblos and was inhabited by amongst others semi-nomadic Hebrew tribes, that supposedly had come from Mesopotamia.

During the early decades of the 12th century BCE, Egyptian hegemony dwindled as the pharaonic rule increasingly weakened. The Hebrew tribes were strengthened by Israelite clans, which according to their written tradition had been led out of Egypt by Moses. The Israelites distinguished themselves from their neighbours by their monotheistic religion, which proved to be a powerful binding force.

From circa 2000 BCE, the ‘Sea People’ entered the region from other parts of the Aegean, among whom the Philistines who settled in today’s region of Gaza. From them the Romans would later derive the name of the region: Syria-Palaestina or Philistine Syria.[/one_half]