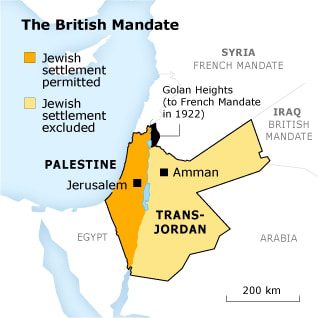 In 1920, the British Mandate for Palestine came into existence, which was approved by the Council of the League of Nations in July 1922. The preamble of the decision stated that ‘the Mandatory should be responsible for putting into effect (…) the establishment in Palestine of a national home for the Jewish people, it being clearly understood that nothing should be done which might prejudice the civil and religious rights of existing non-Jewish communities in Palestine’. This was the exact wording of the Balfour Declaration of November 1917.

Article 2 of the decision read: ‘The Mandatory shall be responsible for placing the country under such political, administrative and economic conditions as will secure the establishment of the Jewish national home (…) and the development of self-governing institutions, and also for safeguarding the civil and religious rights of all the inhabitants of Palestine, irrespective of race and religion.’

Article 4: ‘An appropriate Jewish agency shall be recognized as a public body for the purpose of advising and co-operating with the Administration of Palestine in such economic, social and other matters as may affect the establishment of the Jewish national home and the interests of the Jewish population in Palestine, and, subject always to the control of the Administration, to assist and take part in the development of the country. The Zionist organization, so long as its organization and constitution are in the opinion of the Mandatory appropriate, shall be recognized as such agency.’

Article 6: ‘The Administration of Palestine, while ensuring that the rights and position of other sections of the population are not prejudiced, shall facilitate Jewish immigration under suitable conditions and shall encourage, in co-operation with the Jewish agency (…) close settlement by Jews on the land, including State lands and waste lands not required for public purposes.’

Article 25: ‘In the territories lying between the Jordan and the eastern boundary of Palestine as ultimately determined, the Mandatory shall be entitled, with the consent of the Council of the League of Nations, to postpone or withhold application of such provisions of this mandate as he may consider inapplicable to the existing local conditions, and to make such provision for the administration of the territories as he may consider suitable to those conditions (…).’ The mandate officially came into force on 29 September 1923.

The Zionist movement protested vehemently, yet to no avail, against the exclusion of the lands east of the Jordan River (Transjordan took up 76 percent of the mandated area) from the clauses concerning the establishment of a Jewish national home. In 1946, Transjordan would become the Hashemite Kingdom of Jordan under King Abdullah, one of the sons of Sharif Husayn ibn Ali.