The enclaves of the northern coast 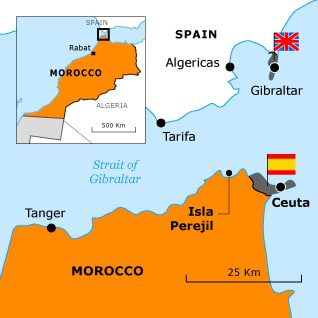 In the late 15th century, during the Christian reconquest (Reconquista) of Spain, civil war and state weakness in Morocco opened the way for Iberian expansion. In 1415, Portuguese forces took Ceuta, at the entrance to the Mediterranean, and they went on to occupy various fortresses on the Atlantic coast: Ksar es-Seghir (al-Qasr al-Saghir) in 1458 and Asila and Tangier in 1471. The Spanish took Santa Cruz de la Mar Pequeña, near Agadir, in 1476. Once the Reconquista was complete, the Spanish concentrated their efforts in the Mediterranean. They took Melilla, in the far north-east, in 1497, Peñon de Alhucemas and two nearby islets in 1559, and Peñon de Vélez, in the west, in 1564. At the same time, the Portuguese solidified their control of the entire Atlantic coast and its maritime trade by occupying Arguin (in modern Mauritania, 1499), Anfa (modern Casablanca, 1458), Agadir (1505), Safi (1507), Azemmour (1513), and Mazagan (1515, modern al-Jadida).

By the beginning of the 17th century, the Moroccans had recaptured all of the Atlantic fortresses, but Ceuta, on the Mediterranean coast, remained in Portuguese hands, and the Spanish held onto their Mediterranean enclaves and incorporated Ceuta in 1580, during a temporary union of the crowns of Spain and Portugal. Ceuta and Melilla are now substantial cities. Ceuta (population 80,579 in 2010) occupies a narrow isthmus of land of 18.5 square kilometres; Melilla (population 78,476 in 2011), on the coast of the Guelaya Peninsula, has an area of 12.3 square kilometres. Peñon de Alhucemas (4.6 hectares) and the Peñon de Vélez (just under 2 hectares) are small military bases, like the Chafarinas group, three small islands near the Algerian border (totalling 52 hectares), which Spanish forces occupied in 1847. Ever since independence the Moroccan government has sought to reincorporate these enclaves into its territory. The inhabitants of Ceuta and Melilla strongly oppose the claim, although it has not been vigorously pursued since the late 1970s, after the failure of the Moroccan case over the colonization of the Spanish Sahara at the International Court of Justice. Nevertheless, Moroccan troops in 2002 occupied Isla Perejil, an uninhabited rock of 15 hectares on the Atlantic side of the Strait of Gibraltar, which the Spanish government claims is part of Ceuta. The Spanish government landed troops of its own, leading to a noisy diplomatic incident that did not resolve the issue.

The eastern and southern frontiers

It was the 16th century Saadi Sultan Ahmad I al-Mansur (1578-1603) who expelled the Portuguese from the Atlantic coast. He also sent an army across the Sahara to seize the gold mines of Gao and the city of Timbuktu (both in present-day Mali). By the 19th century, Moroccan domination was little more than a memory: the sultan was recognized across the Sahara as the ‘Commander of the Faithful’ (amir al-muminin), but he had no real political power. In pre-colonial North Africa, political control was defined by the agreed allegiance of particular tribes or places. This was marked in part by the institution of the baya, a formal recognition by the inhabitants that they recognized a particular ruler, and, less frequently, by paying him taxes; Oran was thus recognized as Algerian and Oujda as Moroccan. Allegiances could change: after the French invasion of Algeria in 1830, the inhabitants of Tlemcen wanted to shift their baya to the Moroccan sultan, but he refused. He wanted to avoid fighting the French army, but that happened anyway, and French troops briefly occupied Moroccan territory in 1844. The Treaty of Lalla Marnia or Lalla Maghnia (1845) fixed the frontier from the Mediterranean southwards for about 150 kilometres, as far as Figuig, and then listed communities further inland that fell under one sovereignty or another. ‘As for the country to the south of the kessours [communities] of the two governments, as there is no water, it is uninhabitable and is a desert in every sense, so that delimitation is unnecessary’, according to the international law professor Clive Parry.

Although the Lalla Marnia treaty did not delineate the full length of the Algerian frontier, the imperialist colonial division of Morocco had begun. It continued in 1860 when, after a brief and inconclusive war around Tétouan, the Moroccan government was obliged to agree to the Treaty of Ras al-Oued with Spain. Among other concessions, the sultan agreed to an expansion of the Ceuta territory and to return Santa Cruz de la Mar Pequeña to Spanish rule, even though no one knew exactly where it was. It was eventually identified as the city of Sidi Ifni, but in 1879 an expedition sent to stake the claim was beaten back by fierce waves and equally fierce military resistance.

In 1879 British commercial adventurers set up a factory at Tarfaya, in southern Morocco, and in 1887 the Spanish established a military post at Villa Cisneros (now Dakhla), even further south, in what is now Western Sahara. In response, Alaouite Sultan Hassan I appointed a governor over the Sahara to unify the Saharan tribes and uphold what authority he had; this was Sheikh Mohammed Mustafa Ma al-Aynayn, who came from a prominent religious family in what is now Mauritania. In the 1880s and 1890s Hassan I also sent military expeditions to southern Morocco that extracted taxes, permanently reoccupied some fortresses, expelled the English from Tarfaya, and received the bayas of many tribes. In 1896-1897 the Alaouite Sultan Abdelaziz subsidized Ma al-Aynayn’s vast new religious centre at al-Semara. Meanwhile, the French army was occupying the desert oases of the far south-east, in what Paris asserted was Algerian territory. In 1900, French forces occupied the oases of Tuat.

In the next decade, the basis was laid for French and Spanish colonial rule over Morocco. As the French army pushed northwards from the Senegal River, many Mauritanian tribes rallied round Ma al-Aynayn in a loosely organized allegiance to the sultan. But Morocco was now coming apart under European pressure, and in 1909 Sultan Abdelaziz was overthrown by his brother Abdelhafid, who was, in his turn, removed by the French, after French troops imposed the Protectorate in 1912.

In the wake of the treaty of Fez, under which Abdelhafid agreed to the Protectorate, the old diplomatic headquarters of Tangier was split off to form an international zone, ruled by a consortium of European powers. The arrangements were only finalized in December 1923, in the Statute of Tangier.

The French government had already recognized future Spanish ‘rights’ over much of northern Morocco, and an expanse of sand in the far south, and once the French protectorate had begun, they agreed to a Spanish sub-protectorate over 20,000 square kilometres in northern Morocco and 23,000 square kilometres around Tarfaya, in the south. Those boundaries were carefully defined. Ifni (still unoccupied), the Spanish Saharan territories of Sakia al-Hamra and Río de Oro (Oued Eddahab), and the northern enclaves and islets remained full colonies of Spain and were excluded from the Protectorate.

The boundaries between Morocco and Algeria (or French West Africa) were defined by military operations, and the lines of division were designed to be temporary. The occupation had to be imposed by force, and it was not until 1936 that Spanish troops occupied Ifni and Ma al-Aynayn’s old base at al-Semara and met up with French forces moving north from Mauritania. Armed resistance finally petered out in 1936, but this was the final reduction of the historic territory of Morocco, leaving memories of a greater Morocco to be resurrected in the late 20th century.

The frontiers after independence

For the nationalist Istiqlal party, this was not enough. Allal al-Fassi, one of its main leaders, described a ‘Greater Morocco’, including Mauritania, a large part of Algeria, and even Mali. Al-Alam (The Flag), the party newspaper, published a map showing just those frontiers. Morocco was independent but incomplete.

After Algeria gained independence in 1962 under a left-wing government, the Moroccan government used the ‘lost territories’ as an excuse to invade Algeria. There was a short war that ended in 1964, leaving the frontier south of Figuig undefined. There is still an unresolved, though inactive, dispute over the territory of Chirac Pastures (Pâturages Chirac) in south-eastern Morocco. In 1960, the Moroccan government also briefly contested Mauritanian independence, but none of these territorial disputes was as important as that of the Western Sahara.

Almost immediately after Moroccan independence, the irregular Army of Liberation attacked Spanish positions in the south. It besieged Sidi Ifni until 1958, but after Tarfaya was returned to Moroccan rule in April 1958, its main activity was in the Spanish Sahara, where the Spanish needed French help from West Africa to defeat it.

Although the Spanish retained control of the Western Sahara, their rule was ineffectual. They did little to develop the economy. Although they had known of rich deposits of phosphates since the late 1940s, it was not until 1972 that exports began. This required the longest conveyor belt in the world, 62 miles long, to transport the rock from the mines at Bu Craa to the coast. There were also rich fishing grounds whose exploitation began in the early 1960s, but profits were negligible. A search for oil proved fruitless. By 1974, there were only 300 miles of metalled road, the 28,010 inhabitants of the capital, Laayoune or El Aaíun (more than a third of the population of the Western Sahara), lived in an extensive shanty town, and only 2,700 out of a school-age population of around 35,000 attended school. Half the population was under 15, the literacy rate was 5 percent, and unemployment was nearly 60 percent. In 1967, the Spanish set up a territorial assembly, the Jamaa (Djemaa), comprising tribal leaders loyal to Spain, but it likewise had no power.

What was the status of the Spanish Sahara? Was it once a part of Morocco, now detached, in which case, Rabat argued, it should be returned to the motherland; or had colonialism made it a separate territory, entitled to self-determination and independence, which a resolution of the UN General Assembly in 1960 had resolved was the right of all colonized peoples (UNGA Res. 1514)? In short, an expression of sovereignty based on the right of a state to control its territory collided with the idea that sovereignty is legitimized only by self-determination.

In December 1966, having already resolved that the Sahara and Ifni should be ‘liberated from colonial domination’, the General Assembly specified that Ifni would be Moroccan and that the Spanish authorities should hold a referendum in the Spanish Sahara to determine the local inhabitants’ wishes, taking into account the wishes of other ‘interested parties’ (UNGA Res. 2229). These other parties were the Algerian government, which feared Moroccan expansionism, and the Mauritanian President, Moktar Ould Daddah, who spoke of a ‘Greater Mauritania’, a supposed common culture shared by Arabic-speaking tribes between the Senegal River and the Drâa valley.

In 1969, Madrid handed back Ifni but ignored the Saharan question, even though there were the first stirrings of nationalism among the local population. Arab nationalists such as Muammar Gaddafi in Libya and Houari Boumedienne in Algeria opposed Moroccan expansionism, even though Algeria backed an independent Sahara and Qatar supported the Mauritanian positions. Even King Hassan II took a nationalist stance, speaking of his ‘unwavering attachment to the principle of self-determination’ for the Sahara. There was no contradiction, because he believed that the Saharans would vote to join Morocco. Thus, the principles of the United Nations and of the Moroccan nationalist movement could both be satisfied.

In 1975 King Hassan took advantage of political confusion in Spain following the death of General Franco to incorporate part of the Spanish Sahara into Morocco. The rest was transferred to Mauritania, which abandoned its area in 1979, in the face of determined opposition from the POLISARIO independence movement. The Mauritanian sector was then added to Moroccan territory by force.