There are some physical remains of the early inhabitants of Morocco, such as the tools of the ‘pebble people’ at Sidi Abderrahman, near Casablanca, and the later flint tools (12,000 BCE) of the Oranian culture in western Morocco. The Sahara began to dry up in about 5000 BCE, and by the third millennium BCE, the Sahara expanded, splitting the Maghreb off from sub-Saharan Africa, and anchoring it more firmly in the Mediterranean basin. By the end of the first millennium BCE, the climatic conditions in Morocco were roughly those of today.

After the 8th century BCE, Phoenicians from Tyre, in what is now southern Lebanon, moved into the western Mediterranean and established a line of coastal settlements to link the Phoenician homeland with the rich minerals of southern Spain. Carthage, in Tunisia, was the most important, and in Morocco there were settlements at Rusaddir (now Melilla) and Lixus, near present-day Larache in the 7th century BCE, and near Essaouira, on the Atlantic, as well as smaller trading posts at Tamuda, near Tétouan, and at Ksar es-Seghir (al-Qasr al-Saghir) and Tingis (Tangier), on the Strait of Gibraltar. The Carthaginians were trading people and had little need to control the hinterland.

The first indigenous kingdoms were that of the Mauri, a tribal federation in the 4th century BCE, and the Maesulians, in the 3rd century BCE, between the River Moulouya and the present-day city of Constantine, in Algeria, which undermined the Carthaginians. The main opponent of Carthage, however, was Rome, with whom it went to war in the 260s BCE over Sicily.

In 243 BCE, Carthage was forced to abandon Sicily and pay a huge indemnity to Rome. The Carthaginians, led by Hamilcar Barca and his son Hannibal, regrouped. In 202 BCE, the Romans defeated Carthage, in the Second Punic War. The final defeat of Carthage, in 146 BCE, was achieved with the assistance of local allies, and, in the century that followed, the Romans allowed North African client kingdoms to emerge. 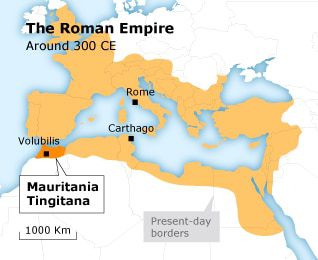 But they were not always trustworthy, and after the Roman Civil War (49-45 BCE), Consul Caesar abolished all the native kingdoms including Mauritania, which covered what is now Morocco and Algeria. In 25 BCE Emperor Augustus handed authority in Mauritania to Juba II, who ruled from Iol Caesarea (now Cherchell, in central Algeria), as a faithful ally. Volubilis (near Meknes), the second city of his kingdom, developed into a great metropolis. When Juba died in 23 CE, the Romans found it difficult to crush the rebellion that followed until, in 40 CE, Mauritania was annexed to the Roman Empire. During this period, the towns of the far west remained resolutely pro-Roman, particularly Volubilis, which became the capital of a new Roman province, Mauritania Tingitana, which corresponded roughly to the northern part of modern Morocco.

Mauritania Tingitana was one of a string of Roman provinces along the north coast of Africa, but the Roman occupation did not extend far into the continent. It was marked by a string of military strongholds stretching inland from the Atlantic coast at Salé. The limes, from which the English word ‘limit’ is derived, was a network of forts and ditches that protected the areas under direct Roman control. Volubilis had perhaps 20,000 inhabitants, most of them of local origin, and it was wealthy, because it produced a huge agricultural surplus of olives and grain and minerals such as lead, silver, iron, and copper. It was on the fringe of the Roman Empire, but the villas of the richer inhabitants were comfortable, with decoration that shows Greek influences, and floor mosaics that sometimes resemble Berber designs. The local petty kingdoms beyond the limes were not always peaceful, and relations with the Baquates, whose territory stretched northwards from Volubilis towards the Mediterranean, shifted from hostility to armed truce to a guarded co-existence.

Another challenge to Rome was Christianity, which spread to North Africa in the second century CE, despite the efforts of Roman emperors to persecute it out of existence, but the main Christian centres were to the east, in what is now Algeria. Mauritania Tingitana was the least Romanized part of north-west Africa, and, late in the 3rd century, Roman forces began to withdraw. Rome abandoned control of Volubilis in 285. It became the capital of the Baquates but remained essentially a Roman town, although it seems to have converted to Christianity. There were bishops in Tingis and Lixus and perhaps elsewhere.

Late in the 4th century the Vandals, a Germanic people on the Danube frontier of the Roman Empire, rebelled, crossed Europe into Spain, and in 429 invaded North Africa. The far north-west was less wealthy, and the Vandals left little trace there. There is some evidence that local kingdoms maintained the Roman social and political system, but we know little about this period.

Vandal rule did not last long anywhere. In 533 Justinian, the emperor in Byzantium who had begun to rebuild the Roman Empire, sent an army to reimpose Roman rule in North Africa, but once again the far north-west was peripheral: Byzantine occupation was limited to Ceuta and Tangier, although Byzantine remains have been found at Salé, and Volubilis was still occupied. Tribal chiefs used the Byzantine presence to strengthen their own rule, and there were several shadowy local kingdoms; the details are unclear.