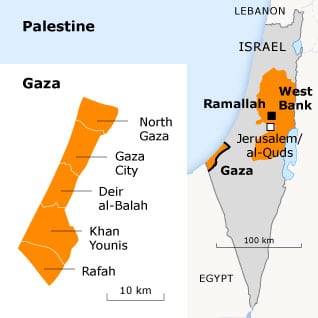 Gaza City is the largest population centre in Palestine, with almost half a million inhabitants. This is a direct result of the massive influx of refugees in 1948. The city is located on a hill, five kilometres inland, but completely merged with the eponymous port in the course of the 20th century.

Gaza (Ghazza) lies on the ancient trade route running from Egypt via the Mediterranean coast to Syria and further into Arabia. Following from these trade contacts, Arabs were present in Gaza long before the arrival of Arab conquerors and Islam in the 7th century. Among those Arabs was Prophet Muhammad’s great-grandfather, Hashim ibn Abd Manaf, a prominent tradesman, whose grave is located in the Sayyid Hashim Mosque in Gaza.

At the same time, the trade route also served as a land bridge crossed by a series of armies belonging to empires either on the rise or in decline. Further inland, they would soon have been confronted with a shortage of drinking water. As such, Gaza has been besieged and captured many times in her long history, and thus has been heavily damaged on numerous occasions, and her population either killed or driven from the city. Because of her strategic position, Gaza – once walled in – has often served as a garrison town.

Later in history, conquerors also came from Europe. Thus, in 1799, a heavily damaged and battered Gaza fell into the hands of the French emperor Napoleon Bonaparte, and, more than a century later, it was taken by the British general Edward Allenby (1917), after a siege which lasted for eight months. Between 1948 and 1967, Gaza came under the control of Egypt. It has since been occupied by Israel – since 2005 indirectly. As a result, Gaza’s socio-economic structure has been totally disrupted.

However, there is another side to the story. In times of peace and stability, Gaza was a flourishing port. It was also a centre of education, frequented by intellectuals – and from the latter years of the Turkish-Ottoman Empire, was one of Palestine’s political-intellectual and nationalistic bulwarks.