Ideology was less important for Hafiz al-Assad than it had been for his predecessors: power was far more important. Al-Assad launched his Corrective Movement (or Correctionist Movement, as it is often termed in official literature), first, because, had he not, he would have been ousted himself, and then, because he favoured more pragmatic economic policies, including a larger role for the private sector, looser links with the Eastern Bloc, and closer ties with the wealthy Arab Gulf States and the West.

The state continued as the central player in the economy after al-Assad’s November 1970 coup, but the aim was more to boost production than to produce an egalitarian society. Pragmatism was the hallmark of all domestic policies under Hafiz al-Assad, not just economic policies, and this approach has continued into his son’s presidency. The overriding, all-pervading objective has been the maintenance of the regime.

Hafiz al-Assad understood that to ensure real security for his regime every part of society had to be brought firmly under his control. The formal structures of the state were key arenas for his programme. In 1971 a tame People’s Assembly, or Parliament, was created. The following year saw the formation of the National Progressive Front (NPF) linking the Baath Party and five other parties deemed to be ‘progressive’ and ‘patriotic’. In 1973 a new Constitution was promulgated, guaranteeing the leading role of the Baath Party in both state and society and granting the President ultimate power in all areas. In 1971 the party itself was restructured.

Its collective leadership was replaced by Hafiz al-Assad personally, and lower leadership appointments were thereafter made from above rather than being subject to election by the membership. Party membership, bringing with it petty privileges and access to the power system, was encouraged. At the time of the 1963 coup party membership stood at just over 400; by 1971 it had reached 65,398. Ten years later it stood at 374,332 and by mid-1992 it had jumped to 1,008,243.

At the same time there was a massive expansion of the state bureaucracy and of the military and intelligence services, bringing tens of thousands of Syrians and their families within the direct purview of the al-Assad-controlled state. As part of the restructuring of the state, al-Assad accelerated the creation of regime-controlled trades unions and professional associations.

Within a few years of seizing control, Hafiz al-Assad’s position was unassailable. He was the supreme commander of the Armed Forces, secretary-general of both the Regional (Syrian) Command and National (pan-Arab) Command of the Baath Party, and head of the executive branch of government. He was personally responsible for appointing his Vice Presidents, the Prime Minister, government ministers and their deputies, military officers, senior civil servants, and judges.

The government was answerable not to Parliament or the people but to al-Assad himself, who had the right to dissolve Parliament at will. Crucially and unsurprisingly, al-Assad also controlled the succession to the Presidency. Under the 1973 Constitution, Syria’s presidents were elected by referenda, with the only candidates being nominated by the party’s Regional Command, itself headed by al-Assad. In addition to all these powers, Hafiz al-Assad had at his disposal the state of emergency, originally declared in December 1962 and extended after the March 1963 Baathist coup, which permitted his security agencies to crush dissent ruthlessly and with impunity.

Below are the publications by acclaimed journalists and academics concerning the Hafiz al-Assad section of this country file: 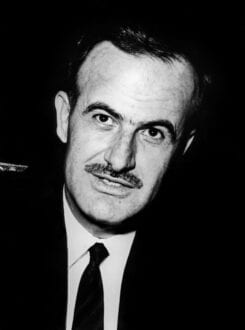 Often – and routinely in the 1980s – Syria used violence as a foreign policy tool and, … Syria: Rebellion and the Hama Massacre in 1982

While responding to the Islamists' bloody violence with mounting brutality of its own, the …

Syria Politics Defence and Security
You may also like