Hebron is considered one of the oldest towns in the world. Muslims initially called the city Masjid Ibrahim (Ibrahim’s Mosque), as it was said that Ibrahim (Abraham) was buried there in the Cave of the Patriarchs, together with his son Ishaq (Isaac) and grandson Yaqub (Jacob), and their respective wives, Sarah, Rebecca, and Leah. Ibrahim was said to be an ancestor of the Prophet Muhammad. Ibrahim is considered to mean ‘Friend (Khalil) of God’ by Muslims. Traditionally, Palestinians used to refer to the city by the same name.

Because of its religious importance, throughout the centuries, a small community of religious Jews has resided in the city (as in Jerusalem and elsewhere). In a period of heightened political tension between Zionist Jews and Palestinians, members of the Jewish community – not adherents to political Zionism – were attacked by demonstrating Palestinians during an outburst of violence on 23 and 24 August 1929. Some were killed, while others were hidden by their Palestinian neighbours, thus escaping the angry crowd. Others fled the city.

Shortly after taking the West Bank in 1967, Jewish settlers, referring to this event, took possession of first one and then a number of buildings in the centre of Hebron (as squatters). At the time, the Israeli authorities were unwilling to take action against this provocation. The presence of the Jewish settlers has since been a source of heightened tension, severely impairing the city in fulfilling its role as the most important commercial and industrial centre in the southern part of the West Bank. 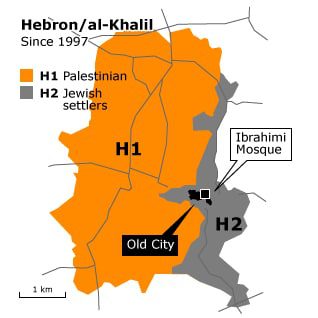 After a series of incidents, in 1997, the Israeli government proceeded to divide the city into H1, covering 80 percent of the city’s territory, where about 115,000 Palestinians lived, and H2, the remaining 20 percent, including the city centre where the Ibrahimi Mosque is located and where about 600 settlers set up house after 1967, together with 35,000 Palestinians. The protection of the Jewish settlers has been entrusted to 1,500 Israeli soldiers.

A whole neighbourhood in the commercial heart of the city has been closed off to Palestinians on military orders. This neighbourhood has been left to the mercy of the elements and has become overrun with weeds in some areas. The Ibrahimi Mosque, where a Jewish colonist shot dead and wounded a number of Palestinian believers on 25 February 1994, has since also been subdivided: 40 percent of the space remained as a mosque, the rest was turned into a synagogue.

The neighbouring, strongly deteriorated Old City also risked falling into ruin because of the extremely difficult political and economic situation. This threat has since been staved off as a result of a substantial restoration project financed with foreign funding. The under-utilization of the Old City has thus been averted.