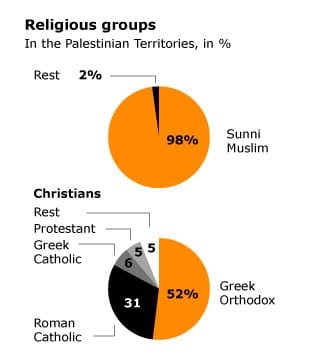 The substantial majority of Palestinians in Palestine (98 percent) are Muslim. In addition, there is a small Christian community.

Palestinian Muslims are Sunni Muslims, adherents to the main branch within Islam. All Muslims are obliged to fulfil five acts, the so-called Five Pillars of Islam: the creed (al–shahada) ‘There is no God but Allah and Muhammad is his messenger’; daily prayers, five times a day (al-salat); almsgiving (al-zakat); fasting during Ramadan (al-sawm); and the pilgrimage to Mecca (the hadj). In addition to the Five Pillars, there is the duty to defend the community of believers (umma) against unbelievers and apostates in their own community (jihad).

Sunni religious leaders are not organized hierarchically. Moreover, there are loose ties between the believers and the religious leaders. Three different roles can be distinguished: the imam (worship leader), the qadi (judge) and the mufti (expounder of Islamic law). The qadi presides over issues related to family law, such as marriage, divorce and inheritance. Most Palestinian Muslims adhere to the Hanafi school of law, one of the four existing schools of law within Islam. The mufti is authorized to issue fatwas (opinions), which serve to guide Muslims. In many cases, the higher religious echelons have spent many years reading theology at the leading al-Azhar University in Cairo (Egypt) – the Vatican of the Sunni world. Practising Muslims pay religious tax (khums) to religious dignitaries.