Although there were already contacts with the Arabs in the Arab Peninsula and some Arab tribes lived in the periphery, the region was first conquered by Arabs at the beginning of the 7th century. After the second caliph (successor of the Prophet Muhammad), Umar ibn al-Khattab, had defeated the Byzantines in 637 in the Battle of Yarmouk (a tributary of the River Jordan), his armies turned towards Jerusalem.

After a siege, the inhabitants surrendered in 638 and Caliph Umar received the keys to the city from the patriarch, Sophronius. Looting of possessions and the massacre of the inhabitants – which was very common in those days – did not occur. In the following centuries, Palestine formed part of a succession of Arab states in which Islam was the official religion. 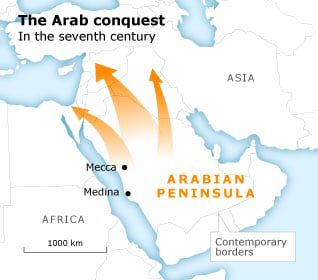 The Arab conquerors did not colonize the territory they had taken. They simply did not have the numbers to do so. Key to their success, both in Palestine and elsewhere, was to refrain from full colonization of the local inhabitants and instead to accommodate them, to a certain extent.

Known as the ‘People of the Book’ (Ahl al-Kitab), Jews and Christians – who had been hard pressed in the latter years of Byzantine domination – were left in peace to freely observe their religion. After handing over Jerusalem, their rights were set down in writing by Caliph Umar – in the so-called Uhda al-Umariya (the Covenant of Omar).

However, Jews and Christians did have to pay head money (jizya) in their capacity as dhimmis (non-Muslim subjects), and a number of restrictive measures were imposed on them. As such, they were a source of tax income for the rulers, which explains the weak incentive to convert them.

In Palestine and other parts of the region it took several centuries for the indigenous population to convert to Islam. Eventually, conversion to Islam was the result of both tax concessions as well as mixed marriages – between a Muslim male and a non-Muslim female (the opposite is forbidden within Islam – unless the father converts to Islam – as children from wedlock naturally inherit their father’s religion).

The spread of Arabic as the common language was much more expeditious. A synthesis of many local elements also produced a rich Arab culture.