The June War of 1967, which lasted for six days, is an example of an escalation of the situation; an escalation which various Arab rulers, not the Palestinians, were held responsible. Israel seized the opportunity to start a war which ended in a devastating defeat for Egypt, Syria, and Jordan. In the course of the war, Israel occupied the Gaza Strip and the West Bank, as well as the Sinai Peninsula (Egypt) and the Golan Heights (Syria) – thus taking control of the remaining part of the former mandate territory of Palestine. Another 300,000 Palestinians (about 30 percent of the population) were forced to flee. 88 percent of the inhabitants of the Jordan Valley fled, most of whom ended up in Jordan. Palestinians call these events in 1967 al-Naksa (the Setback). The June War changed the balance of power in the region, to Israel’s advantage.

As a result of the events of 1967, all of Palestine was occupied, with far-reaching social and economic consequences. Conversely, the occupation offered Palestinian inhabitants in the West Bank and the Gaza Strip the opportunity to visit Palestinians in Israel (and vice versa) for the first time since 1948, which they frequently did. Tens of thousands of Palestinians were also granted permits to work in Israel, especially in the construction industry, but also in the manufacturing and agricultural sector. 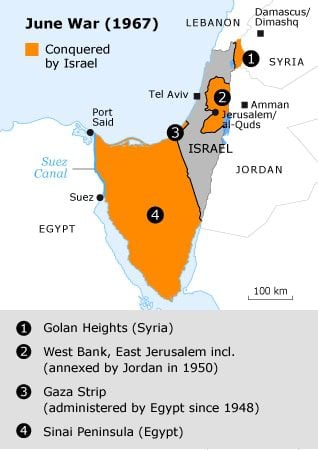