Mamluk rule was brought to an end in 1516 by yet another group of conquerors from the east, the Ottoman Turks, who had converted to Islam. 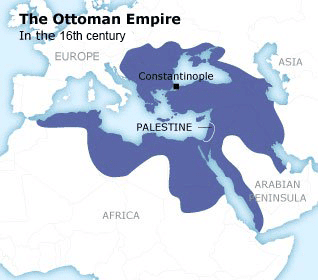 For the following four centuries (with a brief interlude in the first half of the 19th century), Palestine formed part of the Ottoman Turkish Empire.

Initially, this empire stretched from the Balkans and the Middle East to North Africa. It was far too extensive to be colonized by the Turks, and could at best be held by force of arms and (in part locally) with the aid of civil servants. It was ruled from Istanbul, formerly known as Constantinople.

At the head of the Ottoman Turkish Empire stood the sultan, who replaced the Arab caliphs and took over the role of highest religious authority within the community of believers (umma). In the multi-ethnic Ottoman Turkish Empire, Islam was the ideological binding agent. Religious communities belonging to the People of the Book retained their protected status based upon the so-called Millet system (milla means ‘nation’), and had autonomy where internal matters were concerned.

In the following centuries, Bilad al-Sham – the most important Arab region within the empire – was repeatedly divided into various administrative districts. 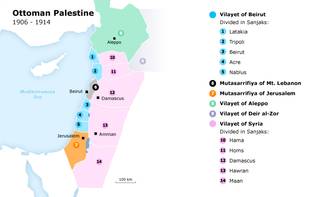 The denomination Jund Filastin (Military District of Palestine) disappeared. In the 19th century, the government in Istanbul retained the term Ard Filastin (Land of Palestine).

In the last division, in the 1880s, the northern part of Palestine was incorporated by the Vilayet or Wilaya (province) of Beirut, whereas the southern part received the status of the Sanjak (district) of Jerusalem, directly administered from Istanbul.

The establishment of a separate District of Jerusalem was at the strong instigation of the Western (Christian) powers of Great Britain, France and Russia, which had established close relations with the various Christian communities. Via these, they managed to penetrate the Ottoman Turkish Empire, facilitated by the fact that the Empire, after centuries of growth, was now in decline, leading, among other developments, to loss of territory in the Balkans. It was increasingly difficult for Istanbul to defend itself against the urge for expansion among Western powers.

In a bid to offer resistance, the Ottoman Turks carried through a thorough reorganization of the Empire in the first half of the 19th century (Tanzimat). This focused upon a greater centralization of the administration, in anticipation that this would give the economy a strong impetus. Tax collection was radically reorganized and landed property was privatized. Military service was also introduced. Initially, the measures taken, in combination with increasing trade relations with the West, did indeed have a positive effect.