The most prominent city in the West Bank is Jerusalem. The name derives from the Hebrew Yerushalayim, once the capital of a Jewish kingdom. Muslims call the city al-Bayt al-Muqaddas or Bayt al-Maqdis (Holy City), or, in short, al-Quds (the Holy One). Jerusalem’s prominent status is founded upon the Aqsa Mosque (al-Masjid al-Aqsa; the Farthest Mosque) and the Dome of the Rock (Masjid Qubbat al-Sakhra). Both are situated on the site known as the Haram al-Sharif (Sacred Noble Sanctuary), a walled plateau in the Old City.

Emulating the Prophet Muhammad, his followers initially faced the direction of Jerusalem during their daily prayers. Later, Muhammad diverted the direction of prayer (qibla) towards Mecca. Within Islam, al-Quds is regarded a holy place as a result of the Prophet’s Night Journey to the heavens ascending from the rock of the Haram al-Sharif – the third most important place, after Mecca and Medina (in the Arab Peninsula).

After the Arab conquest of Palestine, the second caliph (successor to the Prophet Muhammad), Umar ibn al-Khattab, commissioned the construction of the Aqsa Mosque in 638 CE on the spot where the Prophet supposedly prayed. In 690, the fifth Umayyad caliph, Abd al-Malik ibn Marwan, replaced the building with a more permanent structure. He also commissioned the construction of the Dome of the Rock.

In antiquity, the First and Second Jewish Temple were located in the same place. The Second Jewish Temple was destroyed by the Romans in 70 CE. Religious Jews regard the Western Wall (HaKotel HaMa’aravi) – better known as the Wailing Wall – as the last remnant of the Second Jewish Temple; as such, it is their most sacred site. In front of the Wailing Wall is a large square – a remarkable sight in such an ancient city. It was constructed directly after the city was taken by Israel in 1967. The Palestinian Mughrabi (Moroccan) quarter was bulldozed in the process. The 650 inhabitants were allowed only three hours to pack their belongings.

The Haram al-Sharif is called the Temple Mount by the Jewish inhabitants (Har HaBayith). The Roman (Byzantine) emperor Justinian erected the Church of St. Mary on the plateau, which was razed to the ground by invading Persians in 614.

For Christians, too, Jerusalem is a sacred city. The Church of the Holy Sepulchre was built on the spot where Jesus of Nazareth was purportedly crucified (Calvary or Golgotha), buried, and resurrected. Together with the Church of the Nativity in neighbouring Bethlehem, this church is the most important Christian site of pilgrimage in the world. The Via Dolorosa, the route which Jesus is said to have walked on the way to his crucifixion, runs through the Old City. Just outside the Old City are many places mentioned in the Bible, such as the Mount of Olives (Jabal al-Zaytun) and Gethsemane. In the Old City, four neighbourhoods have arisen over the course of history: a Christian, Armenian, Muslim and Jewish quarter. 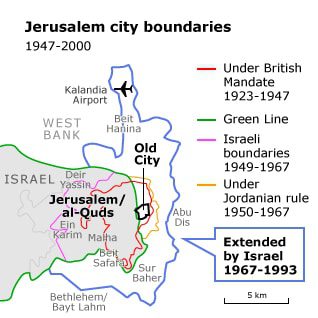 Jerusalem has been a divided city since the War of 1948-1949, when Israel gained possession of the western half of the city and Jordan obtained the eastern half, including the Old City with its holy sites and large souk (market hall). During the June War of 1967, Israel also took East Jerusalem.

The occupation led to annexation (28 June 1967), and Jerusalem was subsequently declared the ‘eternal, indivisible capital of the State of Israel’. At the same time, the municipal boundary was extended substantially both to the north, east and south. Israel thus annexed an additional 64 square kilometres besides the six square kilometres of East Jerusalem.

Since 1967, a chain of Jewish settlements was erected around East Jerusalem in a bid to strengthen Israel’s hold on the city and to block the natural growth of Palestinian East Jerusalem. These include, among others (from north to south), Givat Ze’ev, Ramat Allon, Pisgat Ze’ev, Ramat Shloma, Har Homa, and Gilo.

The same active policy is also being enforced in the Old City: Palestinian homes are either expropriated or bought up by Palestinian straw men or corrupt officials, and subsequently assigned to Jewish settlers. Since the introduction of highly restrictive measures in 1993 and especially since the erection of the Wall with its intimidating ‘border crossings’, East Jerusalem has in effect become more or less inaccessible to Palestinians in the West Bank, for whom the city virtually lies in a foreign country. As a result, Palestinians in the West Bank are cut off both from their spiritual-religious centre as well as from important health and other services in East Jerusalem.

Jewish settlements in Greater Jerusalem on a 3,500 pixel map, of May 2006, distributed by Central Intelligence Agency (CIA) in the United States. Original link: memory.loc.gov