On 2 November 1917, British Foreign Secretary Arthur Balfour wrote a letter to Walter Rothschild, a leading figure in the British Jewish community, expressing the government’s support for a Jewish homeland in Palestine. Comprising a single paragraph, the text became known as the Balfour Declaration. 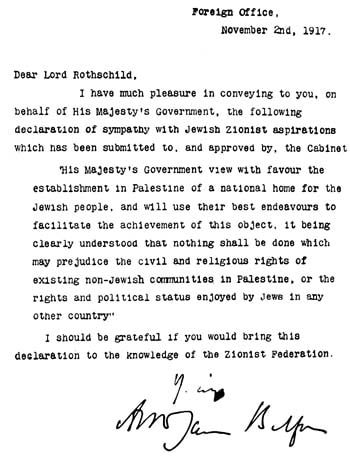 Palestine was, at the time, a remote province in the disintegrating Ottoman Empire, with which Britain had been at war since 1914. Yet despite having no claim to the territory, the British made the declaration without consulting its 650,00 inhabitants, made up of about 92 per cent Arabs (Muslim and Christian) and 8 per cent Jews. With World War I raging, many people in Europe had other things on their minds and paid little attention to this particular bit of political manoeuvring.

In fact, the story of the Balfour Declaration began 20 years earlier. In 1897, the Zionist movement held its inaugural congress in Basel, Switzerland, with the aim of establishing a Jewish state. The common nationalist thinking in those days was that every people needed a homeland. Since the Zionists considered Jews a people without a homeland, a homeland had to be found. And the most logical place for it, according to the Zionists, was Palestine.

To secure such a Jewish homeland ‘by public law’, the movement’s founder, Theodore Herzl, made various advances to different governments in the years preceding WWI.

He started with the Ottoman Sultan Abd al-Hamid, but the sultan refused to help. Herzl then approached the German government, which also declined. The British government offered Herzl a location in East Africa. However, the leaders of the Zionist movement insisted that only Palestine would be considered for a ‘Jewish national home‘.

The Zionists’ cause seemed largely futile, until Britain declared war on the Ottoman Empire on 5 November 1914. By that time, the Zionist movement had attracted supporters and sympathizers in Europe and the United States, and it began to focus its efforts on the British. In December 1914, Herbert Samuel, then president of the United Kingdom’s Local Government Board, later the first High Commissioner in Palestine and a known Zionist sympathizer, wrote a memorandum for Prime Minister Herbert Asquith on the subject of a Jewish state in Palestine. In it, Samuel acknowledged that:

‘The time is not yet ripe for the establishment there of an independent, autonomous Jewish state. (….) The dream of a Jewish state, prosperous, progressive and the home of a brilliant civilization, might vanish in a series of squalid conflicts with the Arab population. I am assured that the solution of the problem of Palestine which would be the most welcome to the leaders and supporters of the Zionist movement throughout the world would be the annexation of the country to the British Empire … It is hoped that under British rule facilities would be given to Jewish organizations to purchase land, to found colonies, to establish educational and religious institutions, and to spend usefully the funds that would be freely contributed for promoting the economic development of the country. It is hoped also that Jewish immigration, carefully regulated, would be given preference, so that in the course of time the Jewish people, grown into majority and settled in the land, may be conceded such degree of self-government as the conditions of that day may justify.’

Around the time that Herzl was lobbying for a Jewish homeland in Palestine, growing Arab nationalism had led to a desire for independence from the Ottoman Empire. At the outbreak of WWI, Britain, which was aware of these desires among both the Arabs and Zionists, decided to use the situation to bolster its own colonial interests.

In July 1915, Henry McMahon, Britain’s representative in Cairo, made an approach to the Arabs through Hussein bin Ali, the Sharif of Mecca. In a series of ten letters exchanged in the following six months, Britain agreed to recognize Arab independence after the war in exchange for Arab help in fighting the Ottomans. McMahon’s letter of 24 October 1915 defined the borders of the future independent Arab state, with a reservation regarding the area located to the ‘West of the districts of Damascus, Homs, Hamah and Aleppo’. The Arabs took this reservation to mean only the province of Beirut and Mount Lebanon, a view corroborated decades later by declassified British documents.

In spite of these agreements, Britain had no intention of giving up conquered territories to the Arabs. During the war, the Allies’ fortunes on the Western Front were not promising, and Britain became concerned about its fate. Two of the country’s most prominent politicians and committed imperialists, Alfred Milner and Leo Amery, devised a solution. In a memorandum to the British government, they proposed occupying as much territory as time permitted in Palestine and Mesopotamia, to offset possible losses in other parts of the British Empire. The memorandum became the keystone of government thinking in the discussions about a British declaration on Zionist aims and in handling the Arab revolt against the Turks, in the delicate negotiations with the French and Americans.

The British, therefore, needed to defeat the Ottomans with the support of the Arabs while at the same time keeping a foothold in Palestine, through the creation of a pro-British Jewish homeland, as envisaged by Samuel, Milner and Amery. Both these aims contravened the promises made to the Arabs. This did not deter the British from their support for the Zionist cause, however. In his letter of 2 November 1917 to Rothschild, Balfour wrote:

‘His Majesty’s Government views with favour the establishment in Palestine of a national home for the Jewish people, and will use their best endeavours to facilitate the achievement of this object, it being clearly understood that nothing shall be done which may prejudice the civil and religious rights of the existing non-Jewish communities in Palestine, or the rights and political status enjoyed by Jews in any other country.’

The wording of the letter was significant. Arab Palestinians, who made up more than 90 per cent of the population, were categorized as a ‘non-Jewish community’ whose ‘civil and religious’ rights had to be respected. Also notable was the absence of any reference to the Arabs’ national rights or right to self-determination.

At around the same time, the British began seizing parts of Palestine and, by the end of WWI in 1918, had become the effective rulers of that part of the Middle East. This status quo was formalized in 1920 by the newly formed League of Nations, which granted Britain a mandate over Palestine.

The Balfour Declaration appeared to be in stark contradiction to American President Woodrow Wilson’s ‘Fourteen Points’, a statement of principles for peace which became the blueprint for post-war peace negotiations, and the joint declaration issued by the British and French governments on 8 November 1918, in which they assured the peoples of Syria, Palestine and Mesopotamia that Allied policy was aimed at ‘the setting of national governments and administrations that shall derive their authority from the free exercise of the initiative and choice of the indigenous population’.

The Balfour Declaration was also in contradiction to the Covenant of the League of Nations, especially the articles about self-determination and, in particular, paragraph 4 of Article 22, which states that:

‘, subject to the rendering of administrative advice and assistance by a Mandatory until such time as they are able to stand alone. The wishes of these communities must be a principal consideration in the selection of the Mandatory.’

In reality, the wishes of ‘these communities’ did not play a role in British thinking. They had not been consulted prior to or after the imposition of British rule. But the writing was clearly on the wall. From the start, the Palestinian Arabs were adamantly opposed to the Balfour Declaration and the subsequent British Mandate. General Gilbert Clayton, chief political officer of Britain’s Egyptian Expeditionary Force, reported in a telegram to the Foreign Office in London on 18 November 1918:

‘Arabs in Palestine are strongly anti-Zionist and are very apprehensive of Zionist aims. They were pro-British in the earlier days of the occupation but are showing a tendency to turn towards the King of Hidjaz [Sharif Hussein] and the Arab Government of Damascus. This attitude is due to the growing conviction that Great Britain is pledged to support the Zionist programme in its entirety.’

A fact-finding commission, suggested by President Wilson, went to the Middle East on behalf of the League of Nations. They visited Palestine in June 1919 and submitted their report two months later. It stated:

‘It is to be remembered that the non-Jewish population of Palestine, nearly nine-tenths of the whole, are emphatically against the entire Zionist programme. The tables show that there was no one thing which the population of Palestine were more agreed than upon this … It is to be noted also that the feeling against the Zionist programme is not confined to Palestine, but shared very generally by the people throughout Syria.

A century on, the importance of the Balfour Declaration and the policies that accompanied it cannot be overstated. British rule of Palestine enabled massive Zionist immigration until the late 1930s. This laid the foundations for the Israeli-Palestinian conflict that continues to this day. The interests of Palestinian Arabs were sacrificed for Britain’s own imperial interests. As Balfour put it bluntly in a memorandum to the British government in August 1919:

‘In Palestine we do not propose even to go through the form of consulting the wishes of the present inhabitants of the country, though the American Commission has been going through the form of asking what they are. The four great powers are committed to Zionism. And Zionism, be it right or wrong, good or bad, is rooted in age-long traditions, in present needs, in future hopes, of far profounder importance than the desires and prejudices of the 700,000 Arabs who now inhabit that ancient land.’